People often act as if life is a simple formula. Just add the right ingredients -- a dash of resilience, a spoonful of moxie—and your life will be perfect, an airy souffle.

Kate Bowler, associate professor of the history of Christianity at Duke Divinity School and author of the new memoir “No Cure for Being Human (and Other Truths I Need to Hear),” isn’t buying it.

“We’re given all these formulas for how to live,” Bowler says. “’Be Present.’ ‘You Only Live Once.’ ‘Just Do What You Love.’

“In all these formulas, the assumption is that your life is going to add up. So I wanted to look at…would it be okay if our lives didn’t always add up?”

For Bowler, life stopped adding up when she was diagnosed at 35 with stage IV cancer. At the time, she was at work on her second academic book. She had to decide whether to forge on with the project, investing further in an academic career that suddenly looked uncertain.

“Would it be worth the risk to spend the year writing a book that almost no one will read,” Bowler says. “If I won’t keep that job and I’ll die at the end of the year?”

“Were my hopes too expensive? Would they cost me too much?” 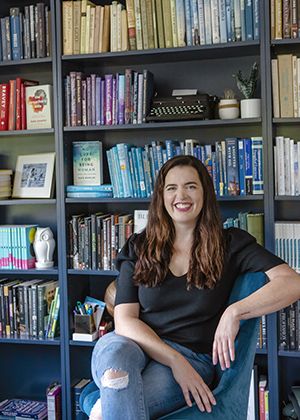 Bowler decided to write the book. “The Preacher’s Wife: The Precarious Power of Evangelical Women Celebrities” profiles pastor’s wives in evangelical megachurches. Bowler conducted interviews for the project in the cancer ward while getting chemo.

“I wrote most of it in waiting rooms,” Bowler says. “It let me find a way to be myself in a situation in which I felt eclipsed.”

Meanwhile, Bowler also pursued a deeply personal project, her memoir “Everything Happens for a Reason (and Other Lies I’ve Loved),” which grapples with making sense of life after her cancer diagnosis. The same year the memoir appeared, Bowler launched a podcast, “Everything Happens with Kate Bowler,” featuring conversations with a wide range of people – ministers, actors, authors and more – about what they’ve learned in dark times.

“Everything Happens” became a bestseller, and the podcast now draws millions of listeners, who tune in for Bowler’s warm, lively exchanges with guests ranging from writer Anne Lamott to actor Matthew McConaughey.

A common thread uniting all of Bowler’s projects is the search for honest language about life’s hardest moments. She resists bromides and formulaic responses to tragedy.

The moment of diagnosis, Bowler recalls, was like “the reverse of the lottery problem, ‘What would you do if you were handed a million dollars?’”

“Mine was like ‘What would you do if you were handed a truly terrible Stage 4 cancer diagnosis?’,” Bowler says. “Would you burn it all to the ground? Would you live on a beach? Would you stay at home and nap or do puzzles?”

“Then I kept living, which was a real surprise,” she adds with a sideways smile.

When she was first diagnosed with cancer, Bowler worried about whether she would live to see her son enter kindergarten. Her son is now 7. Her cancer, while not vanquished, is in remission.

She faces different challenges now than at first, including learning to live with uncertainty. “No Cure for Being Human,” which has drawn positive reviews in Publishers Weekly, Kirkus Reviews and elsewhere, deals with living “not right at the edge of the cliff, but two steps back.”

Bowler says she spends much of the book arguing.

She pushes back against the idea, drawn from Stoicism and Buddhism, of “living in the moment.” Not so easy when mortgage bills and college tuition payments loom on the horizon, she points out. She’s skeptical, too, about whether “mental mastery” is actually possible.

In lieu of tidy formulas, Bowler herself finds solace in novel experiences, and in the absurd. She recently spent a day at sea aboard a boat, tagging sharks. She also made a pilgrimage to “the world’s largest replica of the world’s largest lighthouse.” (Turns out it’s pretty small.)

“I find that having the opposite of pragmatism helps me,” Bowler says with a smile. “Because again, there’s no good math.

“You just have to let delight and surprise fill up one of the batteries. “

These days, Bowler drops her 7-year-old off at school most mornings. It often goes like this: As they scurry to reach the school front door before the bell rings, her son will tug on Bowler’s hand, pulling her back.

Bowler savors those everyday mornings. Meanwhile, in her podcast and her writing, she continues to seek better ways to express difficult truths, to acknowledge that life rarely amounts to a neat equation. She aims for language that is truer and subtler than familiar formulas, and kinder.

“My hope is—especially coming through a pandemic – that we can create a gentler place for our humanity, for our finitude,” Bowler says.

“And for the fact that our lives are usually really terrible math.“