Five individuals on TIME Magazine’s list of the 100 Most Influential People in 2021 have a Duke connection—two trustees, a faculty member, an alumna and a soon-to-be honorary degree recipient.

A member of the Duke faculty is highlighted on the TIME list as a “Pioneer.” Felwine Sarr, the Anne-Marie Bryan Distinguished Professor of Romance Studies, joined the faculty in 2020. A native of Senegal and an internationally known public intellectual, Sarr has research interests that span from economics to literature. In 2018, Sarr and French art historian Bénédicte Savoy were asked by the president of France, Emmanuel Macron, to investigate collections of African art and artefacts in French state-owned museums. Their “Sarr-Savoy Report” on the restitution of African cultural heritage was published in November 2018, and is now being used by museums and other institutions around the world to reconsidering how they present (or, in some cases, return) material collected through the legacy of colonialism.

Duke trustee Mary Barra is featured as an “Innovator.” Barra is chief executive officer of General Motors Company and was elected chair of the GM Board of Directors in 2016.  As CEO, Barra is focused on improving the customer experience and strengthening GM’s core vehicle and services business, while also championing advanced technologies like connectivity, electrification and autonomous driving. Barra received an honorary degree from Duke in 2018 and was elected to the Duke University Board of Trustees in 2020.  Her two children are Duke alumni.

Another Duke trustee, Tim Cook, was selected as a “Titan.” Cook is the chief executive officer of Apple and a member of Apple's board of directors. As CEO, Cook has overseen the introduction of some of the world’s most innovative products and services and has championed inclusion and diversity. He earned an MBA from Duke, graduating as a Fuqua Scholar in 1988. He was elected to the Duke University Board of Trustees in 2015. 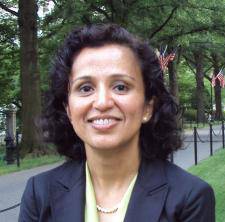 Duke alumna Manjusha P. Kulkarni was named an “Icon.” She and her co-founders of Stop AAPI Hate were recognized for their work in raising awareness of the harassment, discrimination and assault experienced by the Asian American and Pacific Islander (AAPI) community. Kulkarni graduated from Duke in 1991 and is the executive director of the Asian Pacific Policy & Planning Council.

Also listed as an “Innovator” was mRNA researcher Katalin Karikó, who will receive an honorary degree from Duke on Sept. 26 when the Class of 2020 gathers for its Commencement ceremony on campus.  Together with her University of Pennsylvania colleague Drew Weissman – who also will receive an honorary degree -- Karikó made discoveries that helped to lay the foundation for the mRNA vaccines against COVID-19.