In August 2013, a team of scientists mounted a camera on a telescope high in the Chilean Andes and pointed it at the night sky to peer into the cosmos.

Over the next six years, they took pictures of more than half a billion faint, faraway galaxies over an enormous area of the sky to create the largest 3D galaxy maps yet, stretching almost ten billion light-years into space.

Each image was teeming with galaxies in many spectacular shapes and sizes. But what they were really interested in, said Duke cosmologist Michael Troxel, was hidden in the darkest spaces in between.

Look into the sky, and everything you can see or detect with telescopes -- stars, planets -- adds up to about 5% of what’s actually out there. The rest is dominated by something more mysterious. Roughly 25% is what scientists call dark matter, which acts as the invisible glue that holds objects in the Universe together. And the remaining 70% is dark energy, which has the opposite effect and pulls the Universe apart.

The aim of the Dark Energy Survey, as its name suggests, was to study the nature of these two enigmas and how the tug-of-war between them helped shape the universe over time, from its earliest stages to today.

Dark matter and dark energy can’t be photographed. But scientists can detect them indirectly by measuring their effects on how galaxies cluster together, or how they appear to be shaped.

Now, they have unveiled the results from the survey’s first three years of observations. Published in 29 new papers, it’s a treasure trove of data -- 226 million galaxies observed over 345 nights. Combined with previous evidence of what the early universe was like 13 billion years ago, just after the Big Bang, it’s the most powerful test yet of the current best model of the Universe.

“It's incredibly exciting, because we have the statistical power to measure things that we could never measure before,” said Troxel, who led the international team that made this result possible.

Duke Today spoke with Troxel about the project and some of the victories and challenges they met along the way:

Q: Tell us more about the map that was just released. What’s new? What are scientists using this data for?

A: Our first major cosmology release like this was in 2017, and it covered the first year of data. Since then we’ve basically increased the area of the sky that we’re observing by a factor of three. It’s about an eighth of the entire sky. And we’re detecting objects that are up to nine billion light-years away from us, which is about three quarters of the age of the Universe. So we're really creating kind of a movie of the evolution of the universe, how it grew up, because we're observing it from nine billion years ago to almost the current day. We're basically taking photos of it at different stages in its lifetime, and checking how well that agrees with predictions based on previous measurements from the Universe’s infancy.

Q: What do the pictures from the Dark Energy Survey look like? Do you have a favorite object in the data set?

A: What we’re doing here is really quite a different beast, compared to what you typically think about when you think about astronomy. We're really looking for the largest number of objects we can possibly reach to do this statistical analysis. And so the camera on the telescope that we use has been constructed to measure things that are really, really faint and far away from us. These images cover a total area that’s about 6,000 times the size of the full moon. And within every one of those moon-sized patches, we were able to detect and measure the shapes of roughly 20,000 galaxies. You can't see them with your naked eye. Most of these are really faint, just barely above the noise limit, and very tiny, sometimes only a couple pixels across in our camera. If I even had a favorite object it would probably be few-pixel smudge. 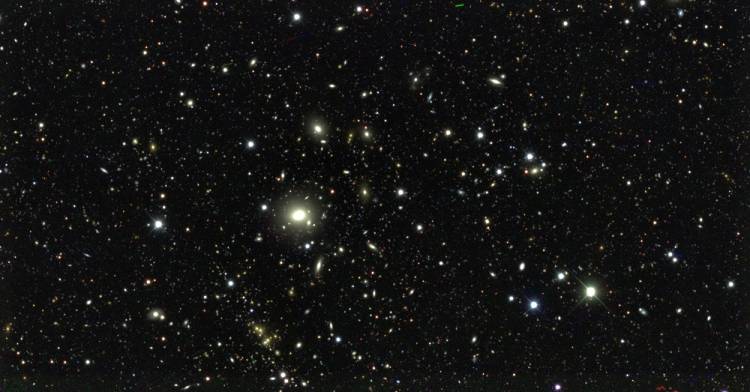 Q: You did most of your analyses without access to the real data. What was it like to see the answer for the first time?

A: In the Dark Energy Survey, we intentionally obscure the data in different ways so that while we're building the analysis, while we're validating that things are working, we have no access to the actual results. And so we build this experiment, we work for two or three years, without looking at the real answer until we’re ready to do so. It’s about preventing unconscious bias from influencing our interpretation of the results. We looked at the final results in early November. The way it works is we have a big Zoom call, sometimes 100 people. But we all see it at the same time. And so it doubles as a celebration of the collaboration getting this far. Sometimes, when you work like this, you find things that are surprising at the end. That's science, and a good thing. We found some surprises with our data when we finally saw the results that will take a lot of work to understand.

Q: What does this mean for our understanding of the Universe? What makes this an exciting time for cosmology?

A: The Dark Energy Survey is one of the largest cosmology experiments going on right now. So we're really in this new and untested territory for this sort of work. We're able to extract an immense amount of information from the surveys now. And we’re able to see things that we were never able to see before, and measure parameters with greater precision. In general, we continue to find something that is consistent with the standard model. And now, by combining data from different experiments, we can place even tighter constraints on things like dark matter clustering, the amount of dark matter, the properties of dark energy. And that's been a spectacular accomplishment.

Q: How has the COVID-19 pandemic affected this research?

A: We were lucky with the Dark Energy Survey in that we completed taking data at the end of 2019, before the pandemic hit. And so unlike some other experiments we didn't have to worry about actually being at the telescope or doing things in person. All of our work is already done remotely, because we're collaborating across multiple continents and many time zones.

But I think everyone has experienced a challenge in terms of maintaining an effort at work that is livable while also caring for people at home. And especially for junior scientists who are living in foreign countries, immigration and visas are really critical in order to maintain their status in the country they're working in. There was a lot of struggle with that related to COVID restrictions and other issues. Some people had to go home and couldn't get back to their professional work country, or ended up being in very different time zones than they were used to, which limited collaboration. A lot of the project leadership over the last year has been managing these stressful situations and the challenges that arise, sometimes more than the science. It hasn’t always gone smoothly. But we’ve all stuck through it. And I think that we have delivered what we wanted to deliver in the end, despite the challenges.

Q: What aspects of this work keep you energized?

A: Working with all of these amazing scientists from around the world has been incredible. My Ph.D work was much different from what I do now. I did my Ph.D. as a theorist, where you’re mostly sitting in your office all day deriving equations and doing your own thing. A typical research paper might have two or three authors. Now the key paper that we’re putting out, which describes the main cosmology results from this release, has almost 200 authors. So it's a much bigger scale. When a team is really working well together, in tandem and, and pursuing some common goal that’s a feeling that is unmatched for me.

Q: What’s next for cosmology at Duke?

A: Our cosmology group has been growing rapidly and continues to be involved in the Dark Energy Survey. Masaya Yamamoto, a Ph.D. student in the group, is helping to improve measurements for the final cosmology analysis. Dan Scolnic co-leads the survey’s supernova working group and is wrapping up their final analysis right now. We also work with Chris Walter on preparing to use the Vera C. Rubin Observatory Legacy Survey of Space and Time, which is built on a neighboring mountain in Chile and is sort of a successor to Dark Energy Survey. That project will start taking data in 2023. Lastly we are working on preparing for cosmology with the Nancy G. Roman Space Telescope, which we’ll send a million miles away from Earth to take data. The launch date is expected to be around 2025.

The researchers are still mining the data from the Dark Energy Survey for insights. Troxel will be taking over as co-chair of the Science Committee and leading the collaboration through its final legacy analyses, using the survey’s full six years of observations. Read their latest findings for yourself at https://www.darkenergysurvey.org/des-year-3-cosmology-results-papers/ .

The Duke-based Internet of Water will serve as the model for a national pilot program to improve how water data is shared.