The National Science Foundation presents the Alan Waterman Award, the government’s highest honor for an early career scientist or engineer, to only two researchers every year. This year, both winners are part of the Duke community.

The award will be shared by Nicholas Carnes, the Creed C. Black Associate Professor of Public Policy and Political Science in the Sanford School of Public Policy, and Duke alumna Melanie Matchett Wood, a mathematician at Harvard University. Both will receive a five-year $1 million research grant.

Duke President Vincent Price said the recognition of both a faculty member and alumna for this high honor in one year showcases the university’s impact and expertise.

“I congratulate faculty member Nick Carnes and alumna Melanie Wood on this prestigious honor. Both are bold thinkers who are tackling some of the world’s most pressing challenges through scientific inquiry for the betterment of society, and we are proud to call them members of the Duke community,” Price said. 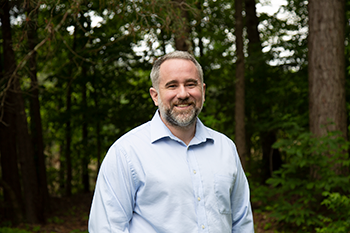 With support from an NSF doctoral dissertation improvement research grant in 2009, Carnes’ research delved into how a person’s background affects whether they pursue public service.

“This award is the greatest honor of my career,” Carnes said. “The Waterman Award will allow me to carry out research that has never been feasible before.”

“My most significant contribution has been helping to revive research on the obstacles that prevent lower-income and working-class Americans from serving their communities as political leaders,” Carnes said.

Carnes is the second recipient from Duke University to receive the Waterman Award. He is the fourth recipient of this award from the social sciences nationwide. In addition, Carnes is the first scholar of public policy or political science to earn this honor to date. According to the NSF, his “innovative contributions show the impact of increased opportunity and representation on our nation’s most important decisions.”

Carnes’ groundbreaking research in public policy and political science focuses on the causes and consequences of the social class composition of Congress and other political institutions in the United States and around the world. His work helps explain who gets elected and why, why that matters, and what we can do about it, said Dean Judith Kelley of the Sanford School.

“Nick’s work had already gained significant notice within the academy – with Nick receiving an astonishing five awards from the American Political Science Association. It’s delightful to see this work now recognized with this prestigious NSF honor, the highest honor that Congress bestows on scholars. Nick’s work speaks directly to the functioning of our society, particularly important at a time when both democracy and scientific knowledge face increased challenges around the world,” Kelley said.

“Nick Carnes’ research and publication record is exemplary, and has established him as a leading scholar in political science and public policy. He has contributed to a crucial public policy relevant debate at a time when this scholarship is more important than ever,” Napoli said.

For example, Carnes’ research about policymakers’ backgrounds has been widely cited and led to public discussion about representational imbalance. Carnes’ findings that “only about 2 percent of members of Congress come from working-class professions … and only about 3 percent of state-level legislators come from the same” are regularly discussed in the media, Napoli said.

Carnes is the author of two books, both of which center on the topic of working-class representation in policy making “White-Collar Government: The Hidden Role of Class in Economic Policy Making” uses data on Congress, state legislatures and city councils to measure how the absence of working-class politicians in U.S. political institutions affects public policy more in line with upper-class economic interests.

Carnes then explored the causes of underrepresentation by the working class in politics. His second book, The Cash Ceiling: Why Only the Rich Run for Office—And What We Can Do About It, examines the connection between government and privilege. It argues that workers seldom hold office because the practical burdens associated with running for office make it all but impossible for them to launch campaigns, and the political and civic leaders who could help them usually pass over qualified workers in favor of more familiar white-collar candidates.

Carnes is also co-founder of the Research Triangle Chapter of the Scholars Strategy Network (SSN), a fast-growing national association of engaged scholars. 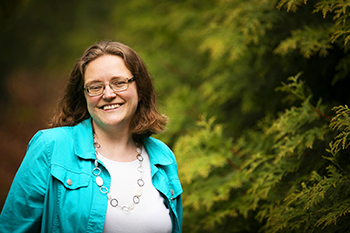 Wood was an AB Duke Scholar at Duke, graduating in 2003, winning both a Gates Cambridge scholarship and the National Science Foundation Graduate Fellowship while at Duke. A math whiz from early on, she started winning national and international mathematics awards in middle school.

At Duke, she won a Faculty Scholars Award, the highest honor bestowed on undergraduates by the faculty. She dove into theater studies, serving as assistant director on "MacBeth," the Duke Players winter show, and producing a musical.

But she made her major mark in mathematics, leading Duke to one championship and several top five finishes in the highly challenging Putnam Mathematical Competition. She also was the first American woman and the second woman overall to win the individual Putnam competition, said David Kraines, associate professor emeritus of mathematics who coached the Putnam team when Wood was a student.

“What I found especially impressive was that, when we came across a 'hole' in her undergraduate education,” said Robert Bryant, Phillip Griffiths Professor of Mathematics. “For example, she had never actually seen a proof of the inverse function theorem. When she hit these “holes,” she would ask a bunch of questions, absorb my sketches of the ideas of the proof quickly, and then, the next week, she would know it solid.  Needless to say, it was a very interesting experience.  I didn't so much teach in the traditional sense of lecturing as talk about the ideas and goals; she pretty much did the rest.

“While it's a pleasure to see how her career continues to develop, I am not at all surprised that she received a Waterman award,” Bryant added.

In winning the Waterman award, Wood is the first woman mathematician to receive the honor.  She previously received a National Science Foundation Career Award in 2017. Her research is largely focused on number theory, a theoretical branch that deals with the properties and relationships of numbers.

“My work has shown that by combining perspectives from probability, geometry and topology, we can understand things about how factorization works across different number systems and how number systems can be enlarged by adding in new numbers," Wood said. “Research into foundational questions in mathematics is important because it tells us about our world and about new technologies it may lead to in the future.”

Nicholas Carnes: Why do only the rich run for office?

With a love for cooking, new Freeman Center for Jewish Life chef manager Eduardo Polit is making memories at Duke