There’s a point in each Sunday service at Duke University Chapel when the congregation pauses to greet those around them. The tradition is known as “passing the peace” and, in most faiths, it’s a reminder that worship is a communal event, best enjoyed among friends, or people that could soon become ones.

“Passing the peace” still happens each Sunday at Duke Chapel, where, for the past year, services have been held without in-person worshippers due to COVID-19. But with an online audience watching from home, hints of that fellowship shine through. In the YouTube chat section, people type “Peace to all,” “Good morning” and a praying hands emoji. Duke Chapel Assistant Dean Bruce Puckett occasionally receives greetings during the peace by text.

From empty sidewalks to cardboard Cameron Crazies, the COVID-19 pandemic has created many surreal sights on Duke’s campus. And for the few who get to see them in-person, Sunday services in an empty Duke Chapel feel as odd as any.

But with the help of technology, the connection between the chapel and the community it serves remains intact as each Sunday service is broadcast online and enjoyed by thousands of worshippers. 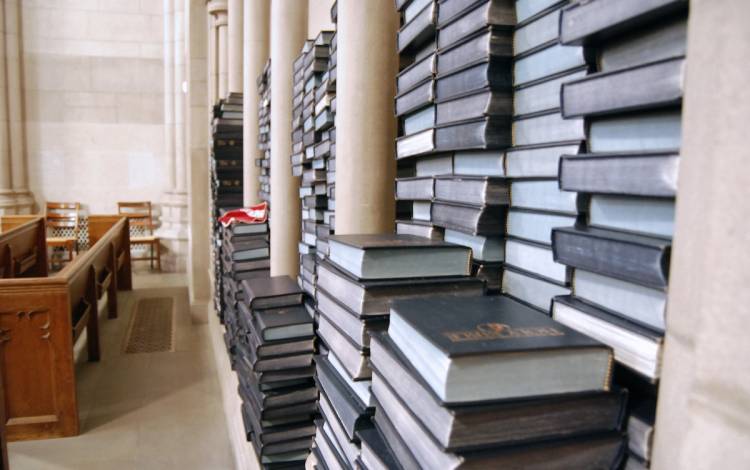 Since before the pandemic, Sunday services have been carried on YouTube, WDNC AM radio and Duke University Hospital’s internal television system. But after the pandemic forced many employees off-site and most campus activities to cease, these remote channels – plus Facebook Live broadcasts, which began during the pandemic – allowed Duke Chapel to reach a congregation that could no longer visit campus.

During the pandemic, the YouTube and Facebook Live broadcasts average around 2,000 views, roughly double that of pre-pandemic broadcasts.

While students, staff and faculty can reserve time on some weekdays to meditate, pray or simply be in the chapel, the Sunday virtual services are the main way people connect with the campus landmark. 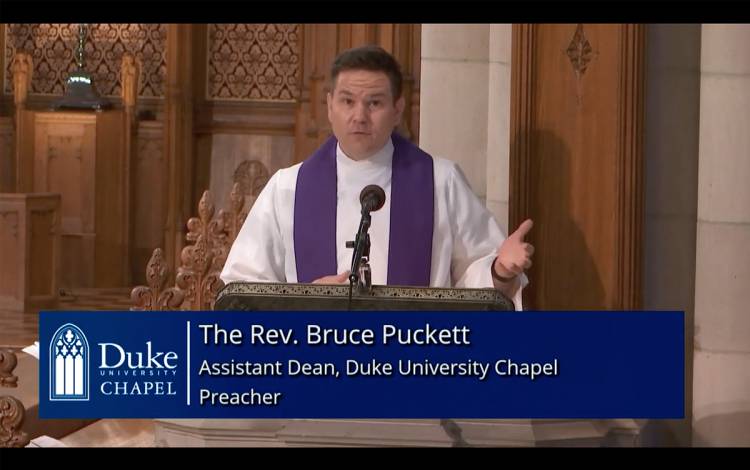 With four cameras, a network of microphones, and a cluster of video and audio production equipment, the infrastructure for live broadcasts was already in place. But in those early days of the pandemic, the empty pews were reminders that things were different.

For parishioners watching from home, online services were a much-needed dose of normalcy.

Tony Willms, an IT analyst with Duke’s Population Health Management Office, has attended Duke Chapel regularly with his family since 2015. For the past year, he’s watched Sunday services on his television by streaming it through YouTube.

Willms looks forward to getting back into the chapel, so he can see friends, hear sermons in person and feel the vibration of the organs. But until then, the weekly virtual services are a pleasant substitute.

“It keeps our family connected to the community,” Willms said. “This allows us to feel like we’re part of something at a time when we all have to be separated and spread out.” 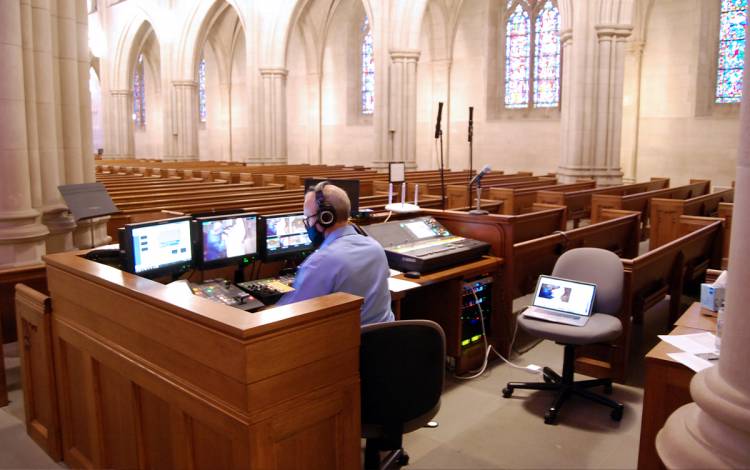 An hour before the service on Palm Sunday, Duke Chapel Communications Manager James Todd was already at work inside the chapel on the virtual service. The three screens and the sprawling soundboard in the production space at the rear of the chapel were lit up. His laptop sat on a nearby chair, already opened to YouTube, where the service would soon appear.

Todd has worked at Duke Chapel since 2014, and on most Sundays before the pandemic, he handled the technical aspects of the broadcasts with help from a rotating group of staff members from the University Center Activities & Events’ Technical Services team.

But since the pandemic began, Todd has handled things himself—in rotation with his chapel colleague Kevin Goldfarb, a communications specialist—adjusting the volume of the microphones, building on-screen graphics, switching between cameras during the broadcast, and making sure all the necessary connections are working. 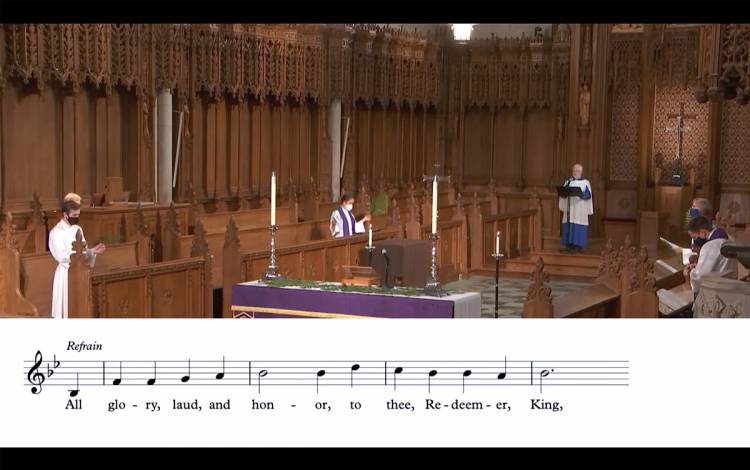 “There was some pressure at first from a sense that I really needed to get this right or else people wouldn’t have church,” Todd said about when services went to broadcast-onl.. “But now, it’s satisfying in each livestream to first see the viewership numbers climb and then see individual people chatting their greetings, prayers, and gratitude.”

As the service began, powerful organ music filled the open, empty space. When the Duke Chapel choir appeared in a prerecorded performance, their faces filled Todd’s screens, but their music wasn’t heard in back of the chapel.

And instead of the service ending with the congregation walking out into the sunshine, the small group of readers, ministers and musicians briefly chatted as they left the chancel area with the altar. 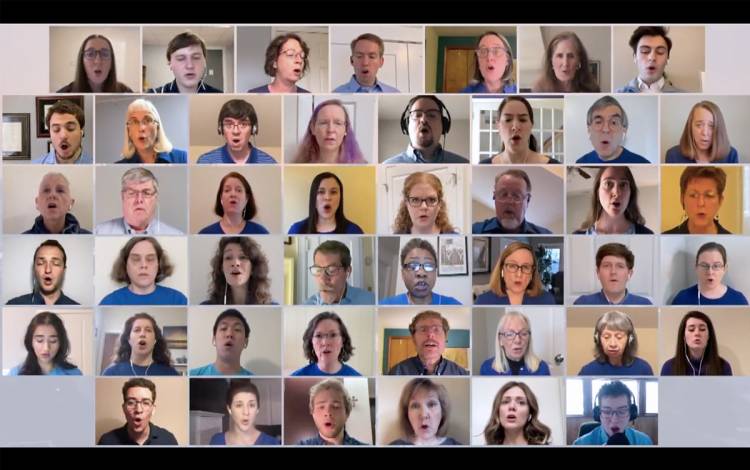 “We get to come to this space that feels so familiar,” said Duke Chapel Assistant Dean Bruce Puckett after leading the Palm Sunday service. “The people at home don’t get to do that. They don’t get to feel the organ rumbling their backs. That’s why helping them maintain these sorts of connections is important.”

Duke Chapel Dean Luke Powery said he misses greeting the worshippers at the door after services. And when especially popular hymns are played, and organ notes echo around the chapel’s limestone walls, he said they seem lonely without the voices from the pews making the journey with them.

But he and the rest of the Duke Chapel team take heart in knowing that, with the Palm Sunday service viewed more than 1,300 times on YouTube and the Easter Sunday service drawing nearly twice that, the congregation is out there, worshipping from afar.

“This is a season for us,” Powery said, “in which we have had to learn how God can bind us together even when we are apart.”

Get Advice on Wellness Topics with Live Webinars