On Wednesday, more than 150 members of the Duke community gathered in front of Duke Chapel to share thoughts on the guilty verdict of Minneapolis policeman Derek Chauvin in the murder of George Floyd, a verdict that Trinity College Dean Valerie Ashby described as a “ray of light in a sea of darkness.”

Thirty minutes of reflection on that moment and America’s history was followed by the ringing of the Duke Chapel bells for 9’29”, the period of time that Chauvin kept his knee across Floyd’s neck, preventing him from breathing and leading to his death.

The event was organized by the Office of Undergraduate Education and the Office of Student Affairs in hopes that students could have a safe place to hear from Black campus leaders and to share a moment in community with one another following another series of police killings of Black Americans that has deepened the trauma experienced by the Black community.

Gary Bennett, vice president of undergraduate education, opened the ceremony, acknowledging that trauma and listing the long history of violence against Blacks going without justice.

“I felt that the aftermath of George Floyd’s death was different, for it was as if for a moment, the entire country stopped and took notice, stopped and observed the things that so many of us had been talking about for so many years.  Even if it was just for a moment, it was as if people understood and were ready to take action. It felt like a movement was beginning.”

But Bennett said he knew that one verdict doesn’t make a movement. His mixed feelings were echoed by Quinton Smith, director of the Mary Lou Williams Center for Black Culture, who spoke of the terror he felt during the Chauvin trial that any hope for justice would ultimately be crushed. In many similar cases, Smith said, justice has been crushed, making hope a “toxic, empty” word.

“This time was different,” Smith said. “Hope gave away not to despair but to relief and joy. Indeed, the world bore witness that the long arc of justice Dr. King spoke of finally had bent toward ever-elusive justice.”

At the same time, that joy was limited by the news of the killing of another Black child by an Ohio police officer, just hours before the verdict, Smith said. The Black community will now carry the name of the young girl, Ma'Khia Bryant, along with Tamir Rice, Michael Brown, Daunte Wright and others killed by police officers, Smith said. 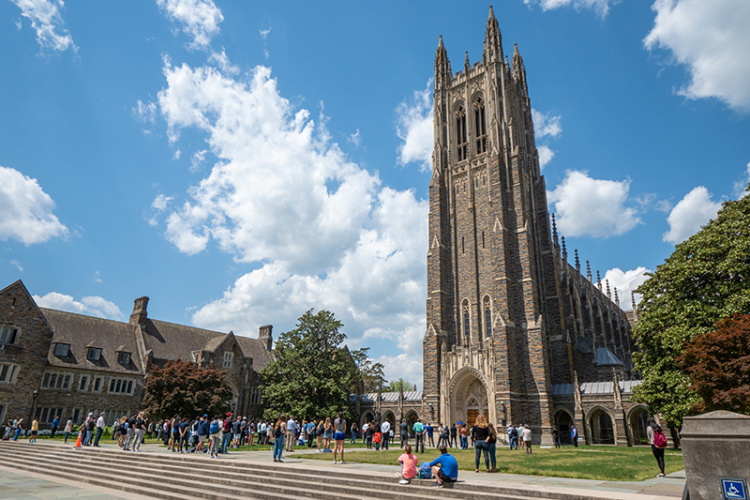 Professor Mark Anthony Neal also referenced that history. He called the Chauvin verdict “an aberration” but said the community must use it for strength to continue the fight “to address the conditions that gave us George Floyd’s murder in the first place.”

“We continue to ask America to have a heart, to love us as much as we have loved this country,” said Neal, chair of African and African American Studies. “That one aberration occurred in Minneapolis does not soothe my hope that we are any more loved than before George Floyd was murdered.”

Ashby directed much of her commentary to the Black students in the audience, telling them that they can find strength to continue the struggle for justice in the very violence that brought their ancestors to America as enslaved people. She told the students that she and other Black leaders on campus always benefited from the support of others who supported them along the way.

"But I just say to all those students, particularly, who are out there: My people come from Middle Passage. And I am never too tired or too weary to wake up every day and fight this fight for you." ~Dean Valerie Ashby pic.twitter.com/ZDsdbkIDTZ

“Each one of us who have spoken today, we can count the names of those folks – the lunch lady, the groundskeeper, the person who drives the bus – who encouraged us when we were in your shoes. It is the very least that we can do to offer that back.

“We are more sure than ever that we are here in the places and positions that we are for such a time as this,” Ashby said. “We will be here for you students and faculty and staff in the same way that other people have been here for us.”

Bennett said the value of the meeting was to have a time for people to reflect and gather and to enjoin themselves to that “most essential act – a fundamental commitment to rooting out injustice.”

“We don’t do this nearly enough,” Bennett said. “I hope it will be a start for a very different type of movement.”

Dean of Students John Blackshear, who also spoke at the gathering, echoed Bennett’s remarks. “This verdict was not the period on the end of a sentence. It was a time to say and to affirm to everyone that the work is not done.”  Today’s gathering, Blackshear said, was “a moment of togetherness, in solidarity, with that commitment in mind.”