They spent years on the Duke campus as students, faculty or staff. Now hundreds of them are turning to Duke again, finding relief from the COVID-19 pandemic by taking short online classes from the safety of their homes.

Joan Axelrod, who graduated four decades ago, is currently taking four classes on topics ranging from nutrition to Shakespeare from her house in Philadelphia.

Dr. Derek Mackesy, an undergraduate lacrosse star at Duke who went on to specialize in sports medicine, is in Ontario, learning about the history of Duke Chapel.

They and other older adults are taking the classes through the Osher Lifelong Learning Institute, part of Duke Continuing Studies. Among the largest of 124 OLLI programs on campuses across the country, OLLI at Duke scrambled this past spring to move its operations online after the pandemic shut down its traditional in-person classes.

Its courses, mostly six or 10 weeks long, are listed on its website.

“I love still being associated with Duke,” Brill says.

So does Bobbie Hendrix, a retired risk manager for the Duke health system, who has taken OLLI classes on topics as diverse as Islam, fossils, sports and genealogy. “I make it a practice to take one class that I know I’m interested in and at least one class that I know nothing about it,” she says. “It’s fun to learn new things.”

The Duke Alumni Association invited local alumni to enroll in the first full batch of online offerings this past fall. It expanded its outreach when OLLI announced 56 online courses for the current winter term, on topics ranging from cryptography to mindfulness. An additional 145 alumni signed up, bringing to 336 the number of Duke alumni who are OLLI members. That's more than a third of the current total, which is much lower than before the pandemic but is expected to recover when in-person classes resume.

“I was semi-disconnected [from Duke]. Now I feel like I’m more connected and I belong.”
-- Penny Cobau-Smith

Among the new alumni members is Penny Cobau-Smith, an education specialist in northern Ohio who “wanted to make 2021 the year I would expand my horizons.” She enrolled as a student — “there are no grades and I like the breadth and depth” — and volunteered to serve as a class moderator and assist the curriculum committee.

Along the way, Cobau-Smith changed how she thinks about Duke. “I was semi-disconnected” after graduating decades ago, she says. “Now I feel like I’m more connected and I belong.”

OLLI's outreach effort supports one of President Vincent Price's strategic goals to engage a global network of alumni and friends, and expand continuing education opportunities for alumni. “We can’t keep viewing alums the way they were when they were students,” says Jenn Chambers, assistant vice president for lifelong learning at the alumni association. “Their identity changes over the course of a lifetime. We have folks with pretty broad sets of interests and OLLI is a way for us to support them.”

Online learning can benefit older adults even without a pandemic, adds Jo Supernaw, the association’s director of academic engagement, who calls accessibility “a huge priority.” Supernaw took one of the online OLLI classes herself, on the music of Rodgers and Hammerstein, and “got to meet people I would never have engaged with. It was a wonderful opportunity.” 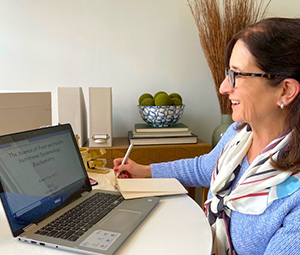 Duke alumna Ginger Wilson is currently taking three online OLLI courses and calls them a “lifesaver” during the pandemic. “People have been locked in their homes. This keeps me going all week.”

“Gerald and I are used to teaching face to face,” she says. “On Zoom, you don’t see people’s faces the same way. We were there in our living room talking about Lincoln but not getting that response.” However, the students were “very smart” and brought extensive life experience to the discussions.

“In my undergraduate classes, I might mention Nat King Cole, or Johnny Mathis or Grace Kelly, and they’d say ‘King who?’” laughs Gerald Wilson, who says the OLLI class also put him back in touch with Duke students who took his classes years ago.

OLLI President Marion Jervay, a Duke Law graduate who worked at the Duke Clinical Research Institute before retiring, said she hopes the growing ties with Duke alumni will make OLLI less of a “well-kept secret” within the Duke community.

“Duke alums are a well-educated audience that long ago embraced the concept of lifelong learning,” she says. “We hope they will not only join OLLI and take classes but decide to actively support it as volunteers and instructors.”

OLLI’s volunteer curriculum coordinator, Beth Anderson, a Duke MALS graduate, says she is always looking for potential instructors and is “very interested in exploring new course ideas with people who have a passion they want to share.”

Passion is a word alumni, retired staff and others who get involved with OLLI often bring up themselves “The community you join has so many interesting people,” says Hendrix. “Everyone wants to learn. Everyone is curious. Nobody’s judging you.”

“I got bored being retired,” says Duke alumna Beth Timson, who retired six years ago from a career in landscape architecture and now lives in Durham. “I looked at the OLLI catalog and thought, wow, there are so many things I’d like to learn.”

OLLI at Duke Director Chris McLeod says this enthusiasm for lifelong learning reflects national trends. “Everybody in higher-ed is having to revise their impressions and revisit their stereotypes of older people just wanting to play golf and live on the coast,” she says. “A lot of retiring Boomers want to live in college towns. They’re remaining very active and engaged, and they have a lot to offer to their universities and communities.”

McLeod says OLLI’s local instructors and students look forward to returning to classrooms where they can interact and socialize, noting “our distinguishing brand is community.” Simultaneously, OLLI’s recent experience shows how it can nurture Duke ties beyond the Triangle.

“We plan to continue offering courses on Zoom even after the pandemic ends,” McLeod says. “We are reaching new markets and want to maintain these connections.”