When he was 11, Chris Bail and his family moved from the Boston suburbs to the French Congo, a turbulent African nation whose fragile peace was routinely upended by three warring military factions.

The 18 months or so living there -- while his father worked as a doctor and public health activist for the World Health Organization -- shaped Bail forever. He saw his mother nearly die when a knife was thrown near her at a market, and his father imprisoned when he refused to pay a bribe.

Chris and his mother soon fled the country, and his father followed six months later.

Bail’s memories, embedded forever, have helped shape his scholarly path; the goal: to explain why people who are so similar often hate each other so much. His 2015 book, “Terrified: How Anti-Muslim Fringe Organizations Became Mainstream,” examined anti-Muslim extremism. 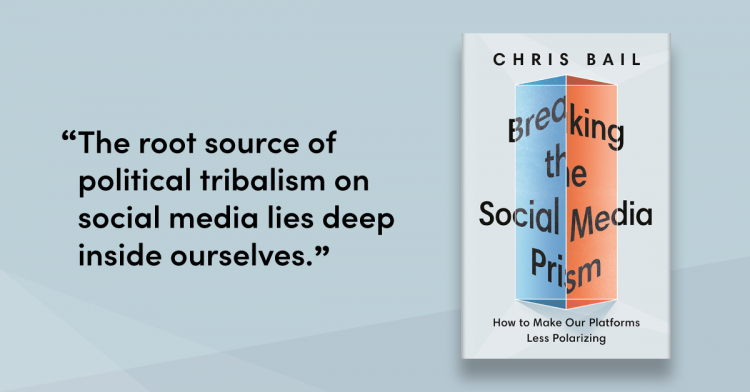 In his new book, “Breaking the Social Media Prism,” Bail dives into political polarization and its manifestations on social media platforms like Twitter and Facebook. Spun from research he and others have done at Duke’s Polarization Lab, Bail examines why political partisans are so unlikely to be swayed by other points of view, and offers tips and tools for people attempting to navigate social media in good faith.

Your book and ongoing research tackle a broad assumption that social media platforms and associated echo chambers are to blame for much of American society’s paralyzing partisanship. But you have a different argument, turning the accountability back onto each individual. Can you explain that?

Many people argue that social media insulates us from those with opposing views by allowing us to connect with people who already share our views and block out those who do not. Taking people out of their “echo chamber,” it stands to reason, should make us more moderate. I shared this view in 2017 but realized that no one had actually studied it rigorously.

With a team of scholars from several different disciplines, I led a study that paid Republicans and Democrats to follow Twitter bots that exposed them to opposing views for one month. Unfortunately, when we compared surveys with these people about their political views that were conducted before and after our intervention, we discovered that no one became more moderate. In fact, Republicans exhibited substantially more conservative views, and Democrats expressed slightly more liberal views.

So it went in the wrong direction. Why?

We’ve been thinking about the relationship between social media and political polarization in the wrong way. We tend to think of social media users as mostly rational actors who encounter information, scrutinize it, and then adjust their views accordingly. But as anyone who has spent much time on social media knows, this is not what most people do on social media. Instead, I think that people use social media to perform one of our most basic human instincts: to develop identities that give us a sense of self-worth.

If we think of social media as a sort of engine for the creation of our identities — that gives us new tools to express ourselves and monitor how other people react to us — then it makes sense that encountering people who do not share your view will usually not provoke introspection and moderation. Instead, most people will experience exposure to opposing views as an attack upon their identity — or their broader sense of how the world works.

Though social media platforms certainly deserve a lot of blame for the current state of political tribalism in our country, I’ve come to believe that it is driven primarily by user behavior — social media is not the root cause of our political malaise but a vehicle that we use to delineate “us” from “them.”

Isn’t it difficult to challenge a person in this way? To suggest to them that their behavior is the culprit rather than the digital environments they inhabit?

Of course, nobody wants to hear that they are the root cause of the problem — it’s the other party’s fault after all, right? The problem is that people on both sides feel this way. That social media is encouraging some of our darker instincts to improve our own sense of self-worth at the expense of others, then it can seem doubly difficult to counteract this all-too human instinct. I think people feel helpless. That is why I put so much effort into creating new technology that can help us become aware of how our habits drive polarization, as well as new apps and bots to help us correct the course.

Some of these tools are designed to help people identify trolls — or people who delight in antagonizing political opponents on social media. Others are designed to provoke introspection. I’m not arguing that everyone has the potential to become an extremist. To the contrary, one of the most important problems we face is the lack of moderate voices on social media. The absence of moderates can make the extremists seem like “normal” members of the other side — a phenomenon that is often called “false polarization.”

Our tools are not only meant to provoke introspection and reflective social media usage, but also to help social media users identity those with whom they can engage in more productive conversations. For example, we have a bipartisanship leaderboard that tracks prominent figures whose tweets resonate with people on both sides, according to some datasets we’ve collected as part of our research. We’ve also built bots that retweet their messages, and other tools that track hashtags and other issues where Democrats and Republicans seem to agree. 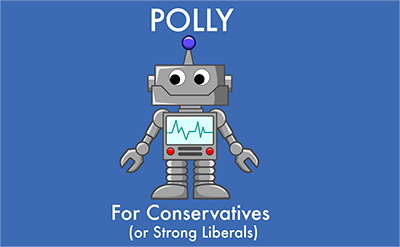 In your polarization lab at Duke, you have a mix of experts – you’re a computational social scientist but the lab also houses statisticians and computer scientists. Why is attacking polarization from those various entry points necessary?

Tackling political polarization on social media is an inherently interdisciplinary endeavor. Computational social science is a new field that emerged because of the remarkable outgrowth of data that describe human behavior — not only on social media but also the mass digitization of the rest of our lives too.

To analyze these methods, we need to import technology from STEM fields. But we also cannot depend upon STEM alone — if solving political polarization were as easy as shifting a machine learning algorithm long ago, the thousands of data scientists employed in Silicon Valley would have fixed this problem long ago. Instead, I believe we need social scientists to take a leadership role in collaboration with STEM experts, since we have produced several centuries worth of research on human behavior that is urgently needed to address a range of different questions— not just political polarization.

And political polarization isn’t the only area where we need more collaboration between social scientists and computer scientists, in my view. This is why I created the Summer Institutes in Computational Social Science—the world’s largest training program in this area with a colleague at Princeton.

A lot of arguments on social media and related to politics in general refer to ‘my side’ or ‘the other side.’ Does that over-simplify the situation? Aren’t there really people on more than just two extreme sides of a clearly divided line?

Absolutely. I think the reason that we use terms like that is that we are seeing the world through our identities. I do not want to overstate the potential for political reconciliation — America remains a deeply divided country. But if we look issue by issue, we discover a lot of potential for compromise. Many more Republicans support universal background checks than most Democrats think, for example, and many Democrats have much more favorable opinions of the police than many Republicans might think.

Social media platforms have had this slow, steady move from fun, silly and somewhat superfluous time-wasters to sometimes-deadly serious purveyors of misinformation. Can such a substantial transformation in a positive direction occur?

This is the million-dollar question. Why should we assume that platforms which were created for banal — or even sophomoric purposes such as college students evaluating the physical attractiveness of their peers — to serve as an ideal forum for democratic discourse? To their credit, the platforms have spent quite a bit of time trying to pivot in more recent years — after a very long period where they ignored the potential for social media to do harm.

But if polarization is primarily driven by human instincts, there is only so much that can be done without a fundamental reorganization of social media. We need research to study how the design and infrastructure of social media platforms shapes social cohesion. To give only one example, what if people achieved status on social media for reaching people on both sides of the political spectrum, instead of winning followers for clever take downs of people on the other side?