Sandy Darity will discuss The Arc of Justice series at 11 a.m. Thursday on YouTube. 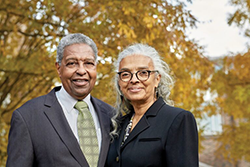 The same pattern repeats itself across the United States, where a yawning wealth gap separates Black and white Americans.

Just how did that vast chasm come about? And how might we respond to it? Those questions are at the heart of the new six-part series, “The Arc of Justice,” a special production of the Sanford School of Public Policy’s “Ways & Means” podcast that premieres March 3.

The series takes its inspiration from the new book “From Here to Equality: Reparations for Black Americans in the 21st Century,” co-authored by Duke economist William “Sandy” Darity, Jr. and folklorist and arts consultant Kirsten Mullen. It’s being produced in partnership with North Carolina Public Radio/WUNC, and is hosted by WUNC’s Lindsay Foster Thomas.

Episode one, "Not So Long Ago," can be heard below.

Sanford School @ Duke · Not So Long Ago

The project builds on scholarship by Darity and Mullen, incorporating insights from other Duke scholars with voices and stories from across the country. Aided by first-person stories from living slave descendants and historical interviews, the podcast illustrates how the racial wealth divide in America came to be. It explores the role federal policy played in creating that divide, and the implications for Americans today, as that divide continues to grow.

The series concludes with a live podcast event on April 15 exploring the idea of reparations for Black Americans, presented together with Duke’s Forever Learning Institute.

“The Arc of Justice” is being produced with support from the Duke Office for Faculty Advancement thanks to funding from The Duke Endowment.

When getting a new computer, advice is to plan ahead and be patient