If he could bottle the sound, he would.

In his backyard music studio in Durham, Matthew Busch lifts his saxophone to his lips, takes a breath, and plays four languid notes. He ascends from an E to an A, then plays up an octave, holding each note for four beats. He switches to another mouthpiece, plays again. Repeats with a third. 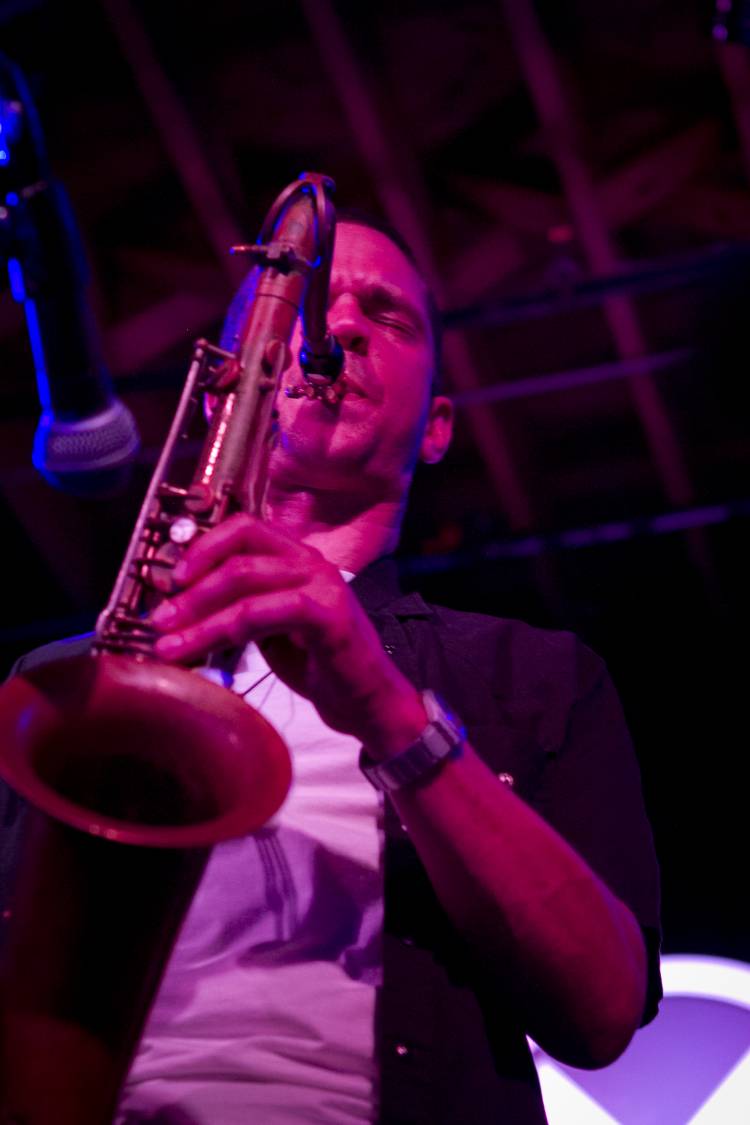 Busch describes the sound coaxed from each thumb-sized mouthpiece like he’s describing a favorite wine. One, a Selmer tenor sax mouthpiece from the 1950s, is expressive, balanced, bright. Another, a copy of a 1930s Otto Link, is even, warmer, easy to play in tune.

More than half a century ago, jazz saxophone greats such as Charlie Parker and John Coltrane played on mouthpieces like these. Molded from metal or hard rubber and then hand finished and customized by master craftsmen, they are becoming increasingly rare. Modern replicas exist, but even the best reproductions fall short of the originals, and no two copies sound exactly alike.

So Busch and colleagues got to thinking: could they help preserve and perhaps even reverse engineer the sound of vintage mouthpieces using new technology, such as X-ray imaging and 3D printing?

A mechanical engineer by training, Busch knew where he could find the right tools for the job, thanks to Duke’s Shared Materials Instrumentation Facility, or SMIF, which provides access to sophisticated equipment whose financial or labor costs can be out of reach for individual labs.

Using CT scanning techniques similar to the ones hospitals use to take pictures of the inside of the body, Busch put together a Bass Connections team to X-ray saxophone mouthpieces from the 1930s to the 1960s -- encompassing the “golden age of bebop” -- and capture their internal details with high resolution. Once a mouthpiece is scanned, the data are sent to a 3D printer, which doesn’t just copy the image onto a flat sheet of paper like a traditional printer, but rather builds an actual replica of the object out of melted plastic or other materials, layer by layer.

As an engineer for Duke’s physics department and the Triangle Universities Nuclear Lab, Busch normally spends his time designing particle accelerators and equipment for studying neutrinos. But he has long been interested in music, no surprise given his family history. “I'm a third-generation saxophone player,” Busch said.

When his grandfather wasn’t working on the family's Wisconsin dairy farm he used to play saxophone in dance clubs, and his father was a school band director, so opting out of playing was not an option. “I had my choice of instruments to pick out, but I did not have the choice of not having an instrument,” Busch said.

For this project the plan was to create a digital archive of rare vintage saxophone mouthpieces, which could then be used to create 3D-printed facsimiles that are more precise than those produced using traditional methods. The team had scanned three vintage mouthpieces and planned to scan more when the pandemic hit, but they agreed to share what they’d learned before the Covid crisis cut their year-long project short.

To produce this model the team used the SMIF’s micro-computed tomography scanner, or micro-CT, which shoots X-rays at an object as it rotates on a turntable, generating thousands of cross-sectional 2D images taken from different angles. Software then ‘stacks’ these images like slices of bread to construct a 3D image that can be sliced or measured from any angle without damaging the original.

The scanner captures the mouthpiece’s dimensions down to the last one-thousandth of an inch, meaning the researchers could zoom in and make out the tiniest details, even chips and scratches that are 20 times finer than a human hair. 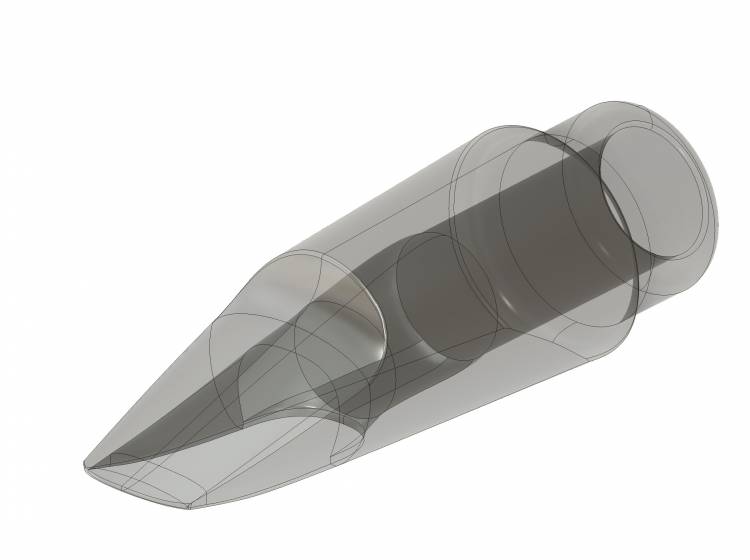 Socolar wrote a computer program to digitally dissect each scanned mouthpiece, breaking it into a few key parameters to try to analyze how they contribute to the sound of the whole.

Socolar’s research is in condensed matter physics and dynamical systems, but he also teaches a course on the physics of music. When you blow into a saxophone, Socolar said, the rush of air travels over a flexible reed clamped to the mouthpiece and sets it to vibrating, which in turn makes the column of air inside the instrument vibrate and give out a note.

Opening and closing the holes along the instrument’s length changes the length of the air column that the sound waves pass through, which changes the pitch. But the saxophone’s timbre  -- its unique tone quality that makes it possible to tell a sax from a clarinet, even when they’re both playing the same note at the same volume -- is mostly determined by the mouthpiece’s internal geometry, Socolar said.

With one click and a few lines of code, he slices the virtual model down the midline to map the contours of the mouthpiece’s inner surfaces, where the smallest variations can affect the sound, converting them into functions, curves and equations. He’s focused on parts like the facing, the curved surface that the reed vibrates against, and the baffle, the first thing inside the mouthpiece that the sound wave hits.

Socolar isn’t a saxophone player. “Though I did make an attempt in my 20s to learn how to play the thing,” he said. He plays the keyboard, and has long been interested in jazz. “I love this stuff,” Socolar said.

One of the students in Socolar’s physics of music class was Bass team member Gia Jadick ’20. A physics and political science double major, Jadick started playing the saxophone in high school. She had never given much thought to the shape of her mouthpiece. That is, until the first day of band camp her sophomore year, when she was assigned the unglamorous job of cleaning the horns.

“I was section leader that year, so I had the privilege of cleaning all the grimy old mouthpieces,” Jadick said. 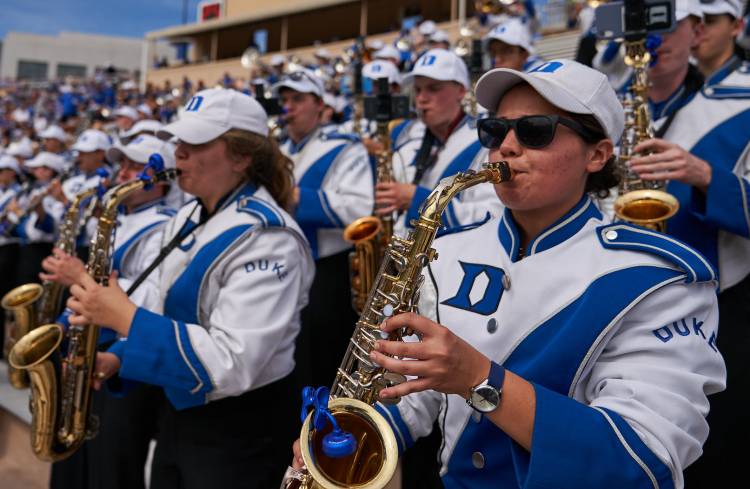 She grabbed a bottle brush, turned on the tap, and set to work removing the remnants of the previous season’s spit and grime. With a gentle twisting action she poked the brush down the throat of each mouthpiece and took to scrubbing off the yellowish sheen built up on each one. Then, after rinsing them out in cold water in the sink, she shook them out and wiped them down before setting them aside to dry.

Looking at some two dozen mouthpieces arrayed on paper towels, she was struck by the subtle differences inside each one. High baffle mouthpieces with brighter tones. Darker-sounding ones with smaller tip openings and open chambers.

“This was the first time I'd really been exposed to all the different shapes and geometries that you could have,” Jadick said.

Jadick’s role in the project was to record musicians trying out the vintage originals and the 3D-printed copies and analyze the results, to see what links they could find between their shape and sound. The coronavirus pandemic meant there wasn't much time in 2020 to gather performers and test the 3D prints in clubs. So the researchers found themselves playing in their homes and recording the results under lockdown.

Stuck in her apartment, Jadick used software to convert each recording into a spectrum plot, which decomposed each recording into the frequencies that make it up. She and teammate Max Bartlett ’20 analyzed the peaks and valleys over time, and also asked musician friends to rate each one in terms of resistance, ease of tuning and other qualities.

The team discovered they could get just as close, if not closer, to the sound and feel of the originals using 3D printing. But pinpointing the geometrical parameters that make them sound the way they do wasn’t so simple.

“The reason is a specific dimensional change in a mouthpiece gives different results for different players,” Busch said.

The intangible alchemy at work in the interaction between a player’s technique and anatomy and the instrument itself is a mystery still left to unravel.

The way a player adjusts their vocal tracts, or positions their tongue and holds their lips -- “all of these contribute in ways that are almost impossible to analyze from a purely physical point of view,” Socolar said.

Busch plans to scan and 3D print more mouthpieces if conditions allow, and says he is teaming up with a collector friend Brian Curry to turn the project into a start-up.

This research was supported by the Duke SMIF Undergraduate User Program (SUUP) and Bass Connections.