The pandemic made impossible in-person viewing of the 88th annual performance of Messiah in Duke Chapel, but an online broadcast from Duke Chapel of major parts of G.F. Handel’s masterpiece brought an audience of more than 2,300 people Sunday, more than any audience for a single previous performance.

Viewership of the livestream on Sunday came from 48 states, Washington, D.C., and nine countries. The final audience will be much larger. More than 7,600 virtual tickets were distributed for free; Ticketholders will get special access to the recording for one more day, and tomorrow the Chapel plans to make the recording public online for non-ticketholders. [UPDATE: The video is now available for viewing here.]

In introducing the concert, Chapel Music Director Zebulon Highben said that despite the challenges of staging a virtual presentation of Messiah, there was value in performing it live. 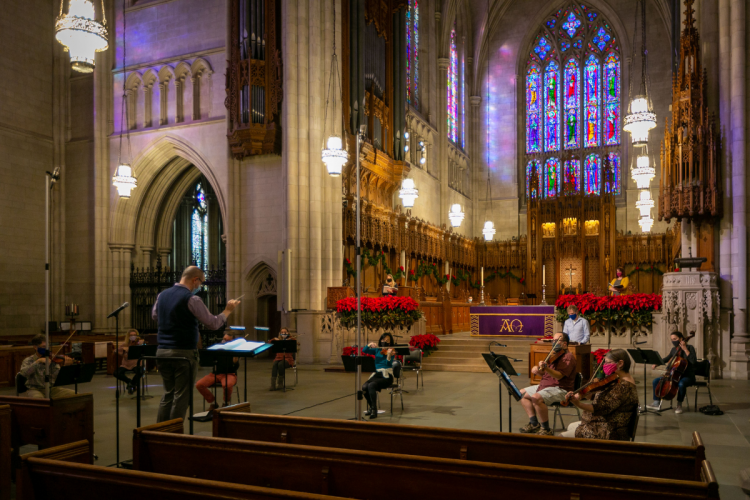 “The tradition of Messiah at Duke Chapel is in part about community,” he said. “The people who pack into this sacred space every year the first weekend in December are participants in the performance…. Although all of you watching this are not physically present in the Chapel, you create a similar community today.”

“The message of Messiah is a message of hope—hope that we need right now, hope that speaks across the centuries yet still speaks in the present tense,” he said.

The show featured live performances by soloists, string players, and Chapel Organist Christopher Jacobson, which were interspersed with recordings of chorus parts performed last year by the Duke Chapel Choir. The recordings—including one of the well-known “Hallelujah” chorus—were presented with musical scores on-screen so people watching could sing along.

This performance adhered to all state and local public health guidelines. It was presented with enhanced health and safety precautions, in consultation with Duke’s Occupational and Environmental Safety Office, enabling the musicians to safely perform. In addition to adhering to all university protocols, those precautions included maintaining physical separation among performers, testing airflow, requiring negative COVID tests from participants, and self-monitoring of symptoms. Note: Camera angles may reduce or distort the appearance of distances between performers.

The online presentation of the concert included a link to a new video about the long tradition of Messiah performances at Duke, in which Duke Chapel Choir members shared reflections about the music and meaning of Handel’s oratorio. Watch it below.