When Sheng-Yang He walks by a field of wheat, or beans, he doesn’t just see a farm. He sees a battlefield.

However, in this conflict, it's not soldiers with rifles on the front line. The war is between plants and the microbes that infect them, and He -- who joins the Duke faculty this year as full professor -- has spent his career trying to understand these battles at a molecular level, though from a different angle than many other researchers.

There’s a lot at stake in the outcome. Take the blight that caused the Irish potato famine of the 1840s. When a fungus-like infection decimated the potato harvest, about a million of Ireland’s 8 million people starved to death, and another million fled the country. Or rice blast disease, which destroys enough rice to feed 60 million people each year.

Today at least 10% of global food production is lost to plant diseases, costing some $220 billion each year. At the same time, current predictions say that the world’s population -- currently at 7.8 billion -- could grow to almost 10 billion by 2050. That will be a lot of mouths to feed.

He, 57, is among the first new faculty recruited to Duke with assistance from a special fund created by the Duke Endowment to advance faculty hiring in the sciences. 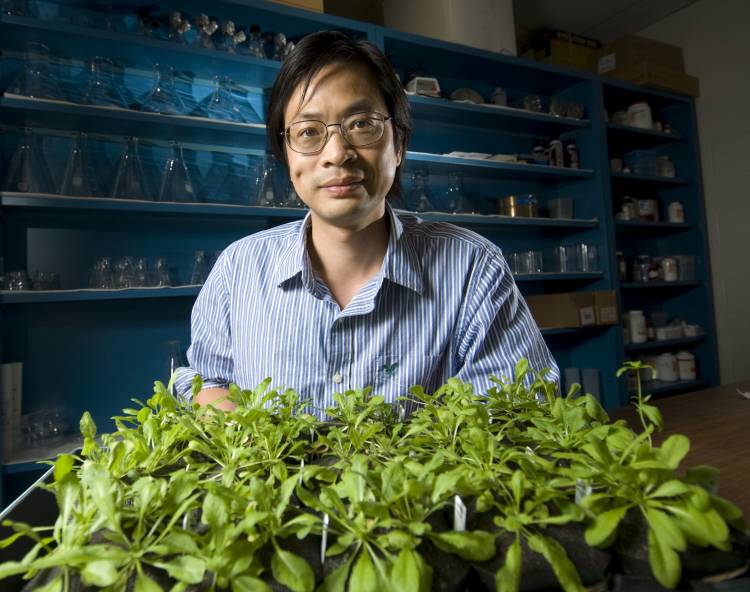 He grew up in a rural village near the city of Ningbo on China's east coast. As a boy he was generally more interested in how tractors worked than in biology. His father suggested he might make a better living as a carpenter than he would in farming, so he spent the summer before his senior year of high school honing his woodworking skills until a strong finish on a college entrance exam propelled him to university instead.

There, a major advisor inspired him to study crop pathogens. He got his undergraduate and master’s degrees at Zhejiang University, then moved to the U.S. to pursue his doctorate, earning his Ph.D. in plant pathology from Cornell University in 1991.

He taught at the University of Kentucky for two years before he and his wife Ke Dong -- herself an academic specializing in insect toxicology and neurobiology -- were both offered jobs at Michigan State University in 1995.

At the time, the first bacterial genomes were being sequenced, and a spindly weed known as Arabidopsis had been widely adopted as a model for plant research. He was “quickly mesmerized” by the possibilities of new discoveries in plant infectious diseases. But while most researchers were focusing their research on a plant's ability to fend off disease, He realized that relatively few people were looking at the flip side of the coin: what makes plants succumb to infection?

He has spent more than two decades studying just that, observing the interactions between the Arabidopsis plant and a ubiquitous bacterial pathogen called Pseudomonas syringae. This rod-shaped bacterium is adept at infecting hundreds of plant species, causing symptoms such as stem lesions and leaf spots. Almost all economically important plants ranging from tomatoes to maple trees are susceptible.

Bacteria like P. syringae have come up with a number of subversive tricks to deceive and hijack their hosts, He says.

Early work by his team revealed one of them: a needle-shaped appendage, later found in human pathogens as well, that the P. syringae bacterium deploys to inject immune-suppressing proteins directly into the cells of its plant host, like a syringe.

But first, He says, the bacteria must make their way inside the leaf.

Most plant pathogens enter through microscopic pores in the leaf surface called stomata that allow moisture and gases in and out. For a long time scientists assumed bacteria just took advantage of these openings, using them as passive portals to sneak into the plant’s tissues. But He and colleagues were surprised to find that plants have an ability to sense the approaching danger and close their stomata to keep bacterial intruders out, as a first line of defense against infection.

They also showed that the bacterium, in turn, has evolved a workaround. It produces a toxin that disarms the guard cells surrounding the plant’s pores and forces them back open.

Not only do existing plant pathogens find ways to adapt to their host’s defenses and persevere, He says, but new pathogens continue to emerge, posing threats to staple crops such as maize and wheat that produce over 75% of humankind’s caloric needs. And some fear they might get worse with changing climate.

Indeed, climate change is the motivation behind the next phase of his research at Duke. Specifically, He plans to study how factors such as warming temperature and water availability influence infection and immunity. He is also expanding his research beyond pathogens to include beneficial microbes that influence plant health. It was Duke’s existing strengths in these areas that attracted him to the university, He says.

For his pioneering work in the area of plant infectious diseases, He was named a Howard Hughes Medical Institute Investigator in 2011, and elected to the U.S. National Academy of Sciences in 2015.

He and Dong were hoping to sell their Michigan home and celebrate their son’s wedding before moving to Duke this fall, but they’ve had to postpone their plans due to the Covid-19 crisis.

“We didn’t anticipate we’d be moving during a pandemic,” He said.

They’ll be arriving on campus this winter, and they’re already dreaming of spring planting and the longer gardening season that awaits them in North Carolina. “I’ve been in Michigan for a while, so I’ve adapted to the cold,” He says. “Weather-wise, North Carolina will be like going back to my hometown.”

Ways to Beat the ‘Sunday Scaries’