DURHAM, N.C. -- You know the type: Loud. Swaggering. Pushy. The alpha male clearly runs the show. Female alphas are often less conspicuous than their puffed up male counterparts, but holding the top spot still has its perks.

Wearing the crown means privileged access, like never having to wait your turn. And now, a study of female baboons points to another upside to being No. 1: less stress.

In a Duke University-led study, researchers describe how, after 18 years of collecting fecal samples from 237 female baboons in Amboseli National Park in Kenya, they found that alpha females have significantly lower levels of glucocorticoids, hormones produced in response to stress.

Baboon females are a very orderly group, with one reigning alpha who gets her way over everyone else, a second-in-command who dominates all but the alpha, and so on down to the bottom-ranked female, who gets pushed around by most everyone.

Dominance gives baboons a lot of advantages in life. Higher-ranking females get preferential treatment in grooming bouts and first dibs at feeding time. As a result, their babies grow faster and are more likely to survive to adulthood.

Considering all these perks, the researchers say it came as no surprise that higher status means lower glucocorticoids. They found that the larger a female’s share of subordinates, the lower her glucocorticoid levels.

But what puzzled the team was why the top-ranking females stood out so much from the rest. Their stress hormone levels were 8% lower than everyone else in their group.

The findings were surprising because baboons aren’t like some other species with clear-cut "queens," said first author Emily Levy, a biology Ph.D. student in Susan Alberts’ lab at Duke.

Top-ranking baboon females don’t claim exclusive rights to reproduction, as in some other species.

“You don't usually look at an alpha female baboon and see a bully,” Levy said. 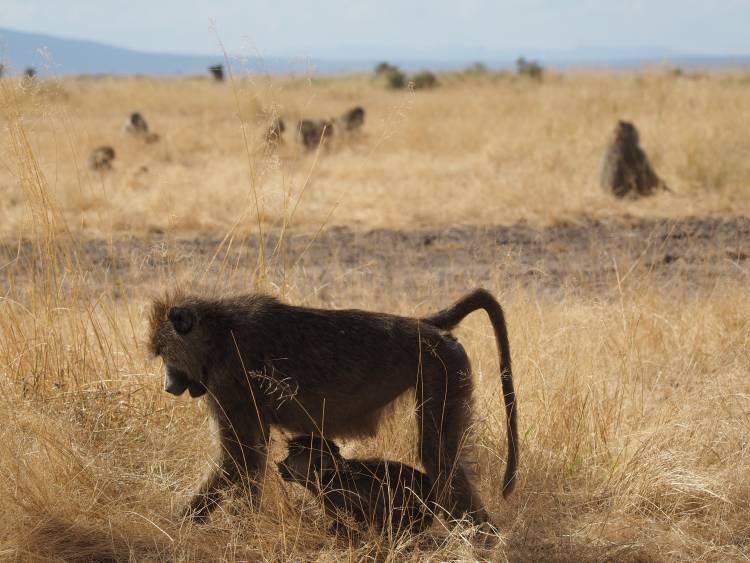 The researchers aren’t sure what drives the disparity between leaders and non-leaders in baboon females, but suggest two possible explanations.

It could be that alpha females experience less stress because they hold their position longer than other females, Levy said.

A baboon matriarch rules in a society in which power is handed down from mother to daughter. All but the top-ranking female eventually cede their spot to their daughters as they get older. But once ensconced in power, alphas have been known to rule for eight years or more.

Take Pindua, an alpha female who ruled unchallenged until she died in 1989. Only then did her daughter assume the throne, recalls Alberts, who has spent 30 years studying wild baboons as part of the Amboseli Baboon Research Project.

“She was definitely a Grand Dame -- very calm and non-reactive, but unambiguous about her power,” Alberts said.

There’s another reason why the alpha female may be different from the others on measures of stress hormones, Alberts said. It’s that there’s no female above her to push her around.

The alpha female only has herself to answer to, Alberts said. She goes where she pleases. “Nobody's going to mess with her.”

Previous research by Alberts and colleagues at Princeton University found the opposite pattern for alpha male baboons. Top-ranked males have the highest levels of stress hormones, presumably because instead of inheriting their status, as females do, males have to fight to stay on top.

“In male baboons you can just watch the alpha for a day and say, wow, that individual is kicking everybody's butt,” Levy said. “For females it's a little more nuanced.”

The findings were published online Aug. 22 in the journal Hormones and Behavior.

Duke scholars detail the history of Black life in America