In the wake of COVID-19-related closures, the Duke Forest Teaching and Research Laboratory is a welcoming green oasis for both the Duke community and the wider Triangle. Since mid-March, Forest staff have witnessed a dramatic increase in public recreation as local residents seek places to hike, run, and reconnect to the natural world.

If all visitors followed the guidelines posted at every public access gate and on the Forest website, the large numbers wouldn’t be a problem. But a recently released Recreation Impact Statement reveals that the cumulative impact of those who choose not to follow the rules is stark.

Recreational visitors have wandered through restricted research areas, disturbing field sites and trampling tender plants. Others take it upon themselves to clear and develop illicit trails, sometimes even using herbicide chemicals to do so. Vandals graffiti signs and picnic tables. Mountain bikes and ATVs erode dirt foot trails or blaze new ones, sometimes in precious Natural Heritage Natural Areas. 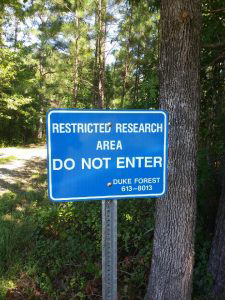 “Duke Forest is a big place, and there are a lot of sites that look to the casual eye like they are not being used,” says Steven Cummer, a professor of electrical and computer engineering at Duke who conducts research in the Forest’s Blackwood division. “But it's important to realize that they are in fact being used, and that these restricted areas are closed with a purpose.”

Disrupting them not only interferes with scientists’ work, it also harms the plants and animals who live there.

“I study the spring ephemerals—the small flowers on the forest floor that bloom from February through May,” says Rebecca Dalton, a local ecologist and former Duke graduate student who still has study plots in Duke Forest. “If somebody steps on the flowers, they are unable to produce fruits which may affect how many flowers there are in the future. It may not seem like a big deal at the time, but it could also affect other animals, like bees, who rely on these flowers. People are really respectful about not stepping in our plots when they see us physically there, but I don’t think they think about it on the weekends or after work hours.” 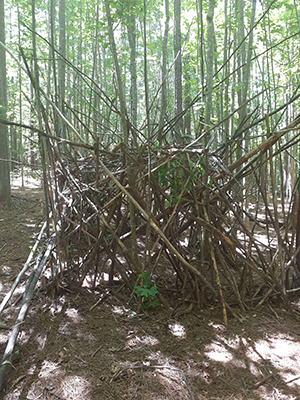 Some hazards aren’t immediately obvious. Duke Forest guidelines require canine companions to be restrained by a six-foot physical leash held by a human at all times.  The idea is that a physical leash provides an easily understood, visual cue that quickly signals to other recreational visitors that a dog is under the direct control of a human—something an electronic device or voice command can’t do. Off-leash dogs harass other visitors and leashed pets, disturb wildlife and trample native vegetation. They’ve even pinned staff in place baring teeth and barking as staff wait for the owners to catch up and regain control.

Then there’s the mess that any dog leaves behind. Dog waste contains bacteria, parasites, and pathogens – some of which can persist and survive for years. Plastic bags filled with scooped poop have been abandoned along roads and sign posts throughout the Forest.  Providing trash service across 7,080 acres, 43 access gates, and three counties is not possible.  Visitors need to take responsibility for their pets and pack it all out.

Even seemingly innocuous things like rope swings, rock piles, and lean-tos are a problem.  Not only are they not allowed in the Forest, visitors who come across them are more likely to add their own contributions and access off-trail areas, increasing the amount of disturbance. 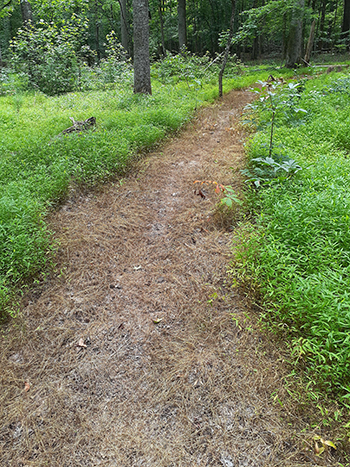 “The reality is there are a lot of good-quality, publicly accessible mountain biking trails in a pretty small geographic area, around Durham and Chapel Hill,” says Cummer, an avid cyclist himself. “Little River Regional Park, Brumley Forest, Lake Crabtree Park, Carolina North and many other places are already available. ‘Bandit trails’ in Duke Forest aren't needed to fill a niche.”

Duke Forest director Sara Childs says that visitors who comply with the rules and posted signs aren’t the problems. “If we had the same number of recreational visitors, but they all followed the rules, then we’d have no problem. It’s the people who use it without regard for others that threaten both Duke Forest’s teaching and research mission and the protection of its natural resources.”

To preserve Duke Forest, Childs urges visitors to do their part by following the rules and paying attention to signage.  She also encourages visitors to report any signs of off-trail activity to Forest staff immediately. A full list of guidelines, along with the Forest’s official Recreational Impact Statement, is available on the Duke Forest website.

The rules boil down to one simple principle: Respect - both for the Forest’s mission and its natural resources. “Remember that Duke Forest is private property, offered up for public recreational use only when it does not conflict with teaching, research, and management,” Childs says. “A good rule of thumb is if you wouldn’t do it in your neighbor’s yard, don’t do it here.”