In early 2001, former Duke football player Troy Austin was a few weeks into his Duke Athletics internship and taking his first unsteady steps into an eventual career in administration.

Sensing that Austin needed to trust his instincts more, Jacki Silar called him into her office and told him to only check with her on big things but handle everything else on his own.

“That one five-minute interaction built a lot of confidence in me,” said Austin, now Duke’s senior associate director of athletics for internal affairs. “In the years since, I’ve found myself using a lot of her advice and guidance.” 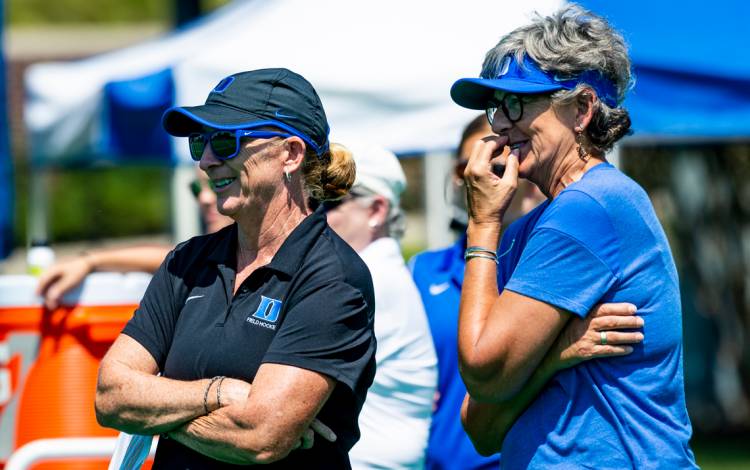 After 41 years in Duke Athletics as a coach and administrator, Silar, who has cameos in many stories of people’s personal development, will retire at the end of June.

With a reputation for being a sympathetic and encouraging confidant for Duke’s student-athletes, Silar leaves an equally important legacy as someone who created a culture of selflessness, accountability and growth among colleagues.

“She’s able to make people across the board, from an 18-year old to a 68-year old, feel safe and OK and accepted,” said Leslie Barnes, assistant athletics director and director of Student-Athlete Development. “If you’re going to build a culture of leadership and developing young men and women, that’s the foundation that you need.”

Silar came to Duke in 1979, serving as an assistant women’s basketball coach. Two years later, she added head field hockey coach to her responsibilities. In 1995, then Duke Athletics Director Tom Butters asked her to become the Senior Woman Administrator, a new position that oversaw the women’s teams and served as a valuable advisor for athletes, coaches and parents.

In that role, Silar flourished. With experience as a coach, administrator and college athlete – she played basketball and field hockey at High Point University – she related to experiences of those around her. And with her ability to simultaneously be empathetic and blunt, her advice resonated.

“She’s approachable, sympathetic and warm,” said Senior Deputy Athletics Director Chris Kennedy, who’s been at Duke since 1977. “People trust her. She’s genuinely kind, and that’s stood out in every role she’s had.”

When discussing navigating a trying job-related moment or major career decision, it’s not uncommon for Duke Athletics staff members to bring up a piece of Silar’s advice.

Is someone special in your area retiring soon? Let us know at hr.duke.edu/sendnews.

Check This Out! Autism screening app for babies