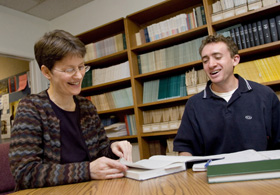 Our colleague and friend Karen Neander has died after a long and valiant struggle with cancer. During her fourteen years at Duke, Karen served as the essential connecting thread between the famous philosophy of biology group here and the influential philosophy of mind and cognitive science group. She contributed extensively to both fields, and to their intersection, throughout her long and storied career. In her work and academic life, she presented a rare combination of philosophical rigor and wry wit. During her years here, she published numerous important papers, influenced many students, and made many friends. Our whole community will miss her presence in every way.

Karen spent her early years in Australia, receiving a BA (with honours) at La Trobe University in New South Wales in 1976. Her early research leading to her dissertation in 1984 at La Trobe concerned topics in the new field of philosophy of psychiatry, but even then, she had begun thinking about the notion of function that would become central to her later work. Karen’s work in Australia in those early years was path breaking—indeed, one prominent figure in the field noted that Karen had some claim to being the very first philosopher of biology in Australia. After holding several positions in her native country, Karen moved to the United States in 1996 to join the philosophy department at Johns Hopkins, and her international reputation in philosophy of biology and of mind quickly expanded. After a brief stint teaching at the University of California at Davis from 2002-2006, she joined the Duke department.

During her years at Duke, Karen served in many important roles, including Director of Graduate Studies and Interim Chair. She was beloved by many graduate students for the care with which she helped them navigate University regulations and academic life, and provided crucial advice to several junior faculty members in their early years. She was a voice of reason and wisdom in many departmental settings, providing essential advice to a later chair in his first year on the job. Karen’s lifetime of work in philosophy of mind, cognitive science and philosophy of biology, presented in a long series of papers over nearly thirty years, happily culminated in a long-awaited monograph in 2017. In A Mark of the Mental, published by MIT Press, Karen presented her distinctive conception of a naturalistic theory of mental representation. She aimed to provide a scientifically accurate conception of the ways in which mental representations manage to have intentionality (how they are in fact representations of the world). The fact that Karen was able to publish a book-length presentation of her theory, a culmination of her life’s work, just as she first fell ill, was a source of great comfort and pride to her and to her many friends and colleagues around the world. Future generations of students and philosophers will encounter her theory and its implications by reading that work. For those of us at Duke and around the world who knew Karen personally, however, we will remember her as much for her philosophical insight as for her kindness and wisdom.

The Harmful Effects of Microaggressions

Microaggressions are hostile or negative slights or acts of discrimination along racial, socioeconomic, religious, gender or sexual identities