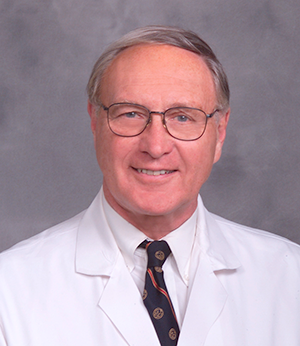 Dr. Walter G. Wolfe, emeritus faculty member and a Duke cardiothoracic surgeon, died on Monday, April 13, at his home in Hillsborough in the comfort of his family and hospice providers. The cause was amyotrophic lateral sclerosis (ALS), often referred to as Lou Gehrig’s disease. He was 83.

Wolfe’s service to Duke spanned more than four decades during which time he served in a number of leadership roles, including associate director of Duke Heart Center (1994-2000), program director of the Duke Surgery Thoracic Residency Program (1994-2002) and Chief of Cardiac Surgery at the Durham Veterans Administration Medical Center (VAMC), a position he held for 30 years. He served also as Chief of Surgery for the VAMC for a short period.

Wolfe is widely credited as having led the cardiac surgery program at the VA to crown jewel status within the national VA Health System. Wolfe was appointed to the position by Dr. David C. Sabiston, then head of surgery at Duke, at a time when the VA system was struggling. He inherited a program with surgical outcomes that were not as good as they needed to be, and a long waiting list of patients needing procedures. One by one, he addressed every challenge he encountered there.

“Walter scrubbed every case for the first year and managed to work through the entire waiting list with zero mortality,” recalled Dr. Ken Morris, former head of cardiology at the Durham VAMC. “He revamped the program and brought a new esprit de corp to the VA.”

Wolfe, a native of Corry, Pa., received his MD from Temple University in 1963. He spent his internship year in surgery at Philadelphia General Hospital, then began training at Duke where he completed residency and began fellowship training. He then pursued a research fellowship at the University of California at San Francisco’s Cardiovascular Institute, where he collaborated with Dr. J.B. West, who is widely regarded as the father of pulmonary physiology. Wolfe then returned to Duke and completed his training in General and Thoracic Surgery in 1971. He was invited to join the Duke faculty as assistant professor in the Department of General and Thoracic Surgery in 1972 and achieved the rank of professor in 1979.

At Duke, he studied under Sabiston -- a luminary in the field of cardiothoracic surgery -- and often served as his go-to partner, particularly on surgeries to treat pulmonary embolism.

“Dr. Wolfe was a surgeon’s surgeon, in all regards, both as a general surgeon and as a cardiothoracic surgeon --this gave him bountiful and wide-ranging experience. His clinical acumen and judgment over the years became one of his finest attributes,” said Peter K. Smith, MD, Duke’s chief of Cardiothoracic Surgery. “At the same time, he was completely devoted both to the residents and to his patients, and he had a moral compass that was directional for everybody around him.”

Wolfe was beloved by his residents and deeply impactful in their lives long beyond their years of training. His combined research and clinical efforts contributed to several milestones in cardiothoracic surgery, including the demonstration of preserving the aortic valve by re-suspension, a procedure which prevents the need for a prosthetic valve in patients with aortic dissection and significantly improved patient outcomes. In 2015, Wolfe was honored with the designation “Master Surgeon” by the Duke Department of Surgery.

Wolfe’s obituary can be found on legacy.com. The Wolfe family is in the care of Hall-Wynne; they will hold a memorial service when circumstances allow.

The Duke Department of Surgery has established the Walter G. Wolfe, MD Memorial Fund, which will be used to support resident education. Contributions can be made to this fund in care of Marcy Romary at Duke Health Development, 300 W Morgan Street. Ste. 1200 Durham, NC 27701. Checks should be written to Duke University.

How to Easily Change Your Email Alias