Irwin Kremen, a leading professor of psychology who mid-career turned his attention to art and became an internationally heralded maker of collages, sculptures and painting, died Feb. 5.

In the early 40's Kremen went to Black Mountain College, a progressive liberal arts school near Asheville, N.C. with the intention to write. There he took classes with the poet MC Richards; they became lifelong friends. Later, in 1951, in New York, he became friends with other artists who also had some affiliation with Black Mountain, particularly dancer Merce Cunningham and composer John Cage. In 1953, Cage dedicated the score of his famous avant-garde “silent” composition 4’33” to Kremen.

“I am saddened to lose a friend, colleague and important artist,” said Nasher Museum of Art Director Sarah Schroth. “Krem, as we affectionately called him, created sophisticated, mysterious, thoughtful collages of stunning beauty and elegance, which attracted acclaim from critics around the country. He loved the process of making them and loved sharing them with others. He was a wonderful force of nature, and will be sorely missed.” 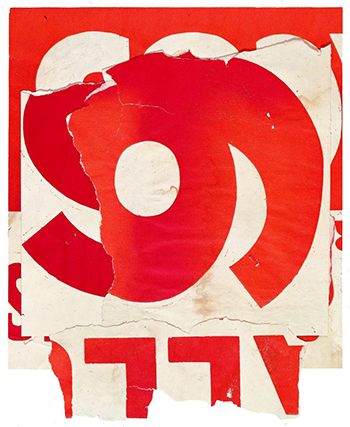 Born in 1925, Kremen was raised in Chicago and attended Northwestern University before becoming a reporter. His career took many paths: At times he was a political activist, a journalist, a poet, a short-fiction writer and an editor. He earned his B.A. from the New School for Social Research and his Ph.D. in clinical psychology from Harvard.

Kremen taught psychology as an assistant professor at Michigan State University and joined the Duke faculty in 1963.

Three years later -- while director of the Duke Graduate Program in Clinical Psychology -- with the encouragement of Richards, Kremen took scraps of colored, patterned cloth, sewed them together on a black fabric backing, and created his first abstract collage.

He continued his academic career in psychology at Duke until he retired as an emeritus in 1992. “He was dedicated and popular teacher, a valued colleague, and the director of the clinical psychology program,” said David Rubin, professor of psychology.

Kremen taught classes specializing in personality theory; later in his career, he developed an innovative course at Duke called "Art and its Making" in which he brought well known artists to Duke to be interviewed.

However, since that pivotal moment with Richards, he was simultaneously producing art that would be highlighted in more than two dozen solo exhibitions.

Nearly anything was potential material for his collages, including scraps of weathered paper, wasp nests, torn pieces from posters, saw blades and bits of steel.

In 2000, he described in Duke Magazine his artistic process: "My general way of working is to start with a heap of materials before me, selecting from them, then arranging and rearranging the elements, often altering them by many different kinds of manipulations," he says. "With these larger panels and materials that are more difficult to manipulate, I had to conceive the works beforehand and visualize them imaginatively to know what I needed and how they would go with everything else. I had to make maquette after maquette, one start revised by another and another, until I got what I wanted.”

His works currently are part of the collections of the Smithsonian, the Museum of Modern Art, the Art Institute of Chicago, the Museum of Fine Arts in Houston and other leading museums.  In 2007, the Nasher Museum of Art held a retrospective exhibition of his work called “Irwin Kremen: Beyond Black Mountain (1966 to 2006).”

His works are abstract expressions,  A major thematic work is the Re'eh Series, which Kremen said started with no direct theme but whose 11 pieces ended up as forming “a monument to the victims of the Holocaust.”

Later in his career, he returned to working in sculpture. One collaboration with Duke faculty member William Noland produced three large-scale sculptures shown as part of the 2007 Nasher Museum retrospective.

Art critics and museums were attracted to his works; often because of his ability through collage and sculpture to turn everyday items into expressions of beauty and depth of feeling.

“[Irwin Kremen’s collages were] exquisite and sophisticated examples in the modern tradition.” Art critic Garret Hold wrote in ARTnews, November 2000. “[They were] thought-provoking and profoundly felt objects of beauty” and “extraordinarily accomplished essays in the art of collage.”

He is survived by his wife, the writer Barbara Kremen; his son, Adam Kremen, a clinical psychologist in Oakland, Calif.; and his daughter, Claire Kremen, a biology professor at University of British Columbia, who obtained her Ph.D. from Duke as a James B. Duke Fellow in Zoology in 1987.