Duke’s chilled water plants keep buildings on campus cool in hot weather. Now, the plants can serve another important purpose in winter, too.

Last summer, Duke installed a water softening system at one of its plants to protect the complicated machinery and 15 miles of pipes that cool 74 main campus buildings. 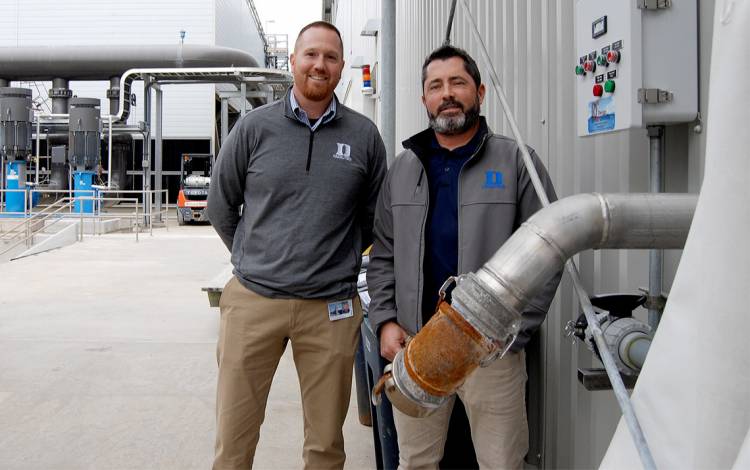 The new water softening system creates and uses large amounts of brine, a mixture of salt and water that is stored in a 2,500-gallon tank in the belly of the plant. Starting this winter, the Landscape Services unit of Duke Facilities Management will use that brine to pre-treat roads and parking lots across campus, making winter storm preparations much more efficient.

And this comes at a time when the load on Duke's chiller plants is far less than it is during summer months.

“It’s just a no-brainer, if we already have it, we might as well use it,” said Duke Facilities Management Landscape Services Superintendent Keith Updyke.

Previously, Duke got its road brine from the city of Durham, which makes large batches of brine for city streets and other entities. While Duke was able to get the brine it needed, it had to work around the city’s schedule and send trucks to brine distribution points several times per weather event.

When fully loaded, the three trucks Duke uses to spread brine can carry around 1,000 gallons combined. Updyke said it takes around 2,500 gallons of brine to treat all campus roadways. When you throw in parking lots, the total grows to around 4,000 gallons.

Now, Duke’s trucks don’t have to leave campus or coordinate with any other entity to get brine. They just need to visit Chiller Plant No. 2 on West Campus, connect a hose to the truck’s tanks and pump brine in.

“Having a schedule that’s determined by us is the real win here,” Updyke said. “We can hone in on exactly what we need for timing.”

In the summer, when the chilled water system is heavily in use, the recharging process that uses the brine can happen a few times per day. But in the winter, the decreased use of chilled water means the water softening system can go weeks without a recharge.

But by using it to get Duke’s roadways ready when snow and ice threaten, the plant newest feature pays dividends even during its slow times.

“I think it’s awesome,” Silcott said. “With (Utilities) Operations and Landscape Services, there usually isn’t much overlap. So with us working together on this, it’s nice to feel aligned and moving toward the same goal.”