On this day, McKoy is mobile in her police vehicle to respond to calls for service, but she has other valuable work to do far from the car’s front seat. Several times a day, McKoy walks campus, checking buildings for propped doors and chatting with students and employees.

There are 182 employees at the Duke University Police Department, which includes uniformed police and security officers, as well as civilian staff. About 50 percent are individuals of color, and about 30 percent are women.

“Nobody wants to walk up to a police car,” McKoy said. “If you get out and they see you, they may say ‘Oh, I have a question.’ ”

For McKoy and the roughly 182 other members of the Duke University Police Department, relationship-building is an essential part of keeping the Duke community safe.

“We are guardians of a community of world class education, research and health care,” said John Dailey, police chief at Duke. “We try to prevent violence, reduce fear and build relationships. That’s what this is all about.” 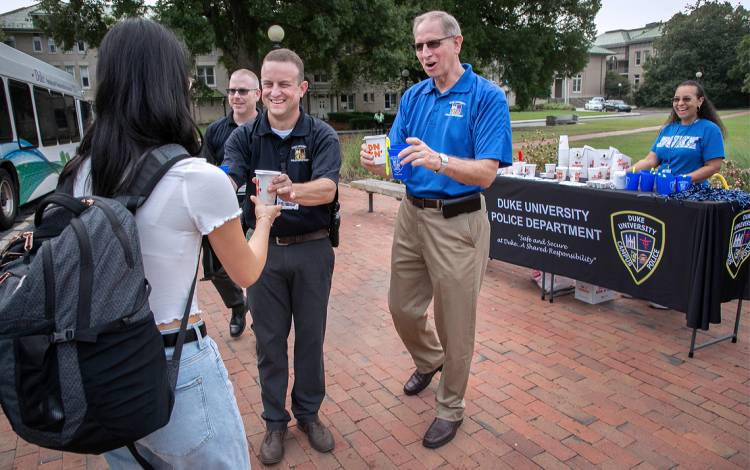 With earbuds in and eyes on smartphones, students waiting for morning buses on East Campus rarely acknowledge the outside world, often looking up only when the C1 East-West bus rumbles into view.

But on a recent Tuesday, the arrival of a pair of unmarked Duke Police Department vehicles aroused curiosity. When members of the department emerged carrying cartons of coffee and boxes of warm mini-donuts, interest increased.

Each student who cycled through the bus stop was greeted with the same question:

“Would you like some coffee and donuts?” asked Daryl Mount, community services officer.

The pop-up coffee stand likely wasn’t the first time students encountered Mount and colleagues Eric Hester and Kelly George. They’re the team that handles most of the department’s crime prevention and outreach efforts.

With community cookouts, roving safety presentations at schools, departments and units, and sessions for engraving valuables, Duke officers are a presence throughout the year.

“We are a community-based police department,” Mount said. “We want to make sure everyone has as safe an environment as possible while they’re at Duke.” 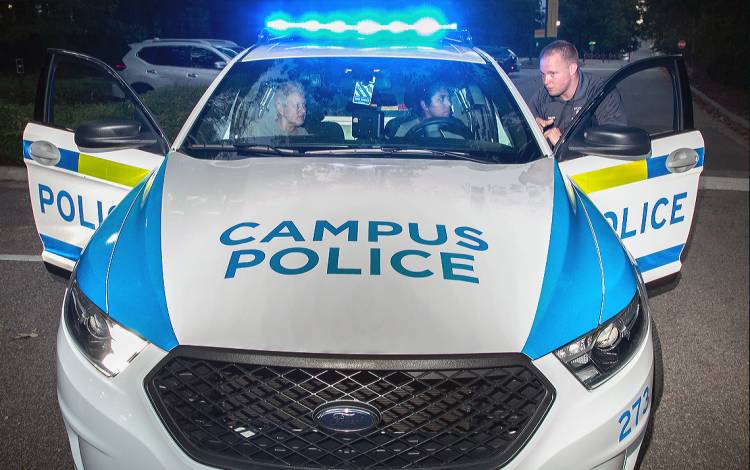 After one year as a Duke security officer in Duke University Hospital, Aaron Pruka had five months of police academy training before transitioning to officer in the department’s Patrol Division.

Since he graduated from the police academy in 2014, Pruka’s education hasn’t stopped.

Like all police department members, he takes courses to sharpen his equipment skills and stays up to date with changes to policies and procedures. In addition, he participates in sessions focusing on emotional intelligence, implicit bias and a 40-hour Crisis Intervention Training that partners with local mental health providers on the best ways to help people in distress.

Without being able to relate to people, Pruka explains, most of the other skills won’t amount to much.

“It’s very important,” said Pruka, who previously worked as a probation officer in his home state of Minnesota. “We’re all people. We’re all human. So, for me, it is important to look inward and think about how I handle things in order to keep everyone safe.”

This approach is put into action when officers assist someone in distress on or near campus. During moments like these, the human touch Pruka and his colleagues work hard to strengthen, looms large.

“When somebody’s in crisis, it may seem like there’s no reasoning with them,” Pruka said. “You just try to talk with them and see what’s going on and how you can help.”

Part of the Community 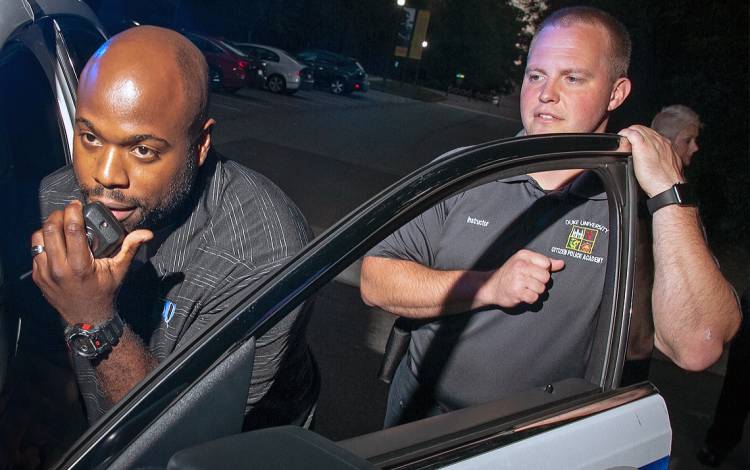 With help from a loudspeaker, Janeli McNeal’s voice cut through the din of idling car engines on a quiet evening in a campus parking lot.

“Driver, show me your hands!” shouted McNeal as she looked out beneath the pulsing blue lights of a police cruiser.

McNeal, a social worker with the Duke Dementia Family Support Program, was among 16 members of this fall’s Duke Citizens Police Academy class. She was navigating a simulated high-risk vehicle stop as part of the class.

Since it began in 2013, the Citizens Police Academy has been a successful method for uniting Duke Police with the community. Over a span of seven weeks, employees – who apply for the academy – spend evenings learning how police do their job. And there’s excitement to go along with the education as participants experience hands-on activities such as untangling simulated crime scenes.

All told, 241 Duke employees have graduated from the Citizens Police Academy, the next session of which begins in February. Academies are also available for students and for employees who’ve completed the first academy.

“The work police officers must do is already complex,” said Dailey, the police chief. “Officers must be able to effectively interact with people who range from happy to hostile, from cooperative to aggressive. Couple that with the complexity of the Duke community – a concentration of students, employees, visitors and patients. It takes a unique skill set to effectively connect within the different situations.”

While participants get an inside look at police work, Duke police officers widen their network of community connections.

“I think it’s really valuable to have those relationships with the police,” McNeal said. “You want to have that sense of community, build that rapport and have trust. They’re going to have empathy, and they’re here to support us.”

Price: Juneteenth to Be a Day of Reflection and the Beginning of Eliminating Racism