Duke student Peishu Li ’19 remembers the first time he saw a baby panda being born, in a video for a class taught by biology professor Kathleen Smith. “It just seemed like a jelly bean popping out of a vending machine,” Li said.

Born pink, blind, and helpless, giant pandas typically weigh about 100 grams at birth -- the equivalent of a stick of butter. Their mothers are 900 times more massive than that.

This unusual size difference has left researchers puzzled for years. With a few exceptions among animals such as echidnas and kangaroos, no other mammal newborns are so tiny relative to their mothers. No one knows why, but a new study of bones across 10 species of bears and other animals finds that some of the current theories don’t hold up.

Li and Smith published their findings this month in the Journal of Anatomy. 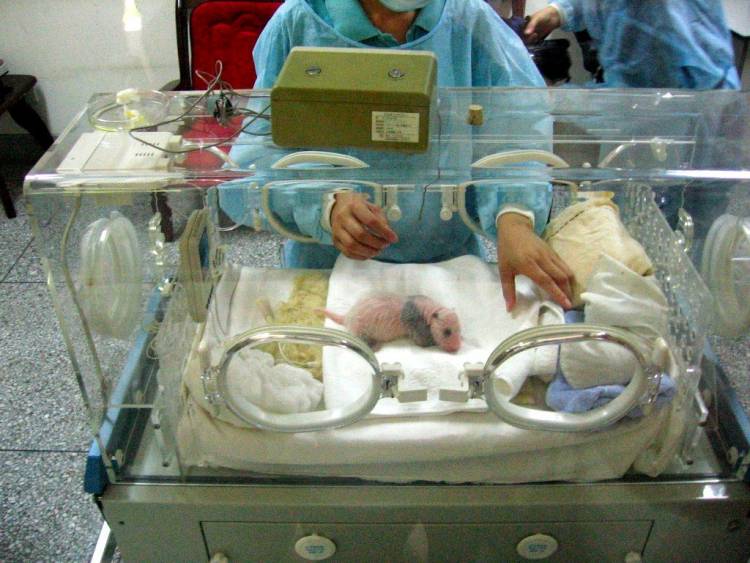 Baby panda skeletons are hard to come by, but the researchers were able to study the preserved remains of baby pandas born at the Smithsonian’s National Zoo in Washington, D.C.

The National Zoo’s first panda couple, Ling-Ling and Hsing-Hsing, had five full-term cubs in the 1980s, but none of them survived long after birth.

The researchers took micro-CT scans of two of those cubs, along with newborn grizzlies, sloth bears, polar bears, dogs, a fox, and other closely related animals from the Smithsonian National Museum of Natural History and the North Carolina State College of Veterinary Medicine.

They used the scans to create 3-D digital models of each baby’s bony interior at birth.

As a baby animal grows and develops inside the womb, its bones and teeth do, too. The researchers examined the degree of ossification, or how much the skeleton has formed by the time of birth. They looked at whether the teeth had started to calcify or erupt, and the degree of fusion between the bony plates that make up the skull.

The panda may be an extreme example, but all bears have disproportionately small babies, Li said. A newborn polar bear’s birthweight as a fraction of mom’s is less than 1:400, or less than one-half of one percent of her body mass. For the vast majority of baby mammals, including humans, the average is closer to 1:26.

One decades-old idea links low birthweights in bears to the fact that, for some species, pregnancy overlaps with winter hibernation. Pregnant females don’t eat or drink during this time, relying mostly on their fat reserves to survive, but also breaking down muscle to supply protein to the fetus.

The thinking is that, energetically, females can only afford to nourish their babies this way for so long before this tissue breakdown threatens their health. By cutting pregnancy short and giving birth to small, immature babies, bears would shift more of their growth to outside the womb, where babies can live off their mother’s fat-rich milk instead of depleting her muscles.

Proponents of the theory concede that not all bears -- including pandas -- hibernate during the winter. But the idea is that small birthweight is ‘locked in’ to the bear family tree, preventing non-hibernating relatives from evolving bigger babies too.

But the Duke team’s research shows this scenario is unlikely. The researchers didn’t find any significant differences in bone growth between hibernating bears and their counterparts that stay active year-round and don’t fast during pregnancy.

In fact, despite being small, the researchers found that most bear skeletons are just as mature at birth as their close animal cousins.

The panda bear is the one exception to this rule, results show. Even in a full-term baby panda, the bones look a lot like those of a beagle puppy delivered several weeks premature.

“That would be like a 28-week human fetus” at the beginning of the third trimester, Smith said.

Other factors might have pushed panda babies toward smaller sizes over time -- some researchers blame their bamboo-only diet -- but data are scarce, Li said. The researchers say the panda bear’s embryonic appearance likely has to do with a quirk of panda pregnancy.

All bears experience what’s called “delayed implantation.” After the egg is fertilized, the future fetus enters a state of suspended animation, floating in the womb for several months before implanting in the uterine wall to resume its development and get ready for birth.

But while other bears gestate for two months after implantation, giant pandas are done in a month.

The researchers say they only looked at skeletons in this study, and it could be that other organs like the brain tell a different story. But the new study suggests that baby pandas follow the same trajectory as other mammal relatives -- their bones mature in the same sequence and at similar rates -- but on a truncated timetable.

Scientists are still searching for a complete explanation of why the panda’s peculiar size differential evolved over geological time, and how.

“We really need more information about their ecology and reproduction in the wild,” Smith said, and we may not have much time given their risk of extinction. But this study brings them one step closer to an answer.

This research was supported by a Shared Material Instrumentation Facility Undergraduate User Program grant, the Duke Department of Biology, and the Undergraduate Research Office at Duke.