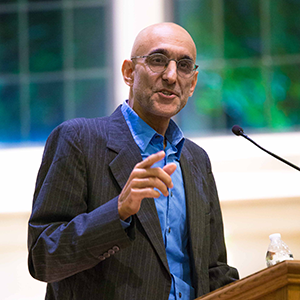 In football, a nose guard is a position with no glamour and no glory.  A defensive bulwark, the nose guard must hold his position along the line of scrimmage—it takes a physical toll.

Former All-American nose guard Dr. Thomas Catena brings that same determination to his work as a medical missionary in the Nuba Mountains of Sudan, where he is the only surgeon serving 750,000 people in a remote and war-torn area.  He spoke in Goodson Chapel in Duke Divinity School Tuesday evening.

The conversation was moderated by David Toole, associate professor of the practice of theology, ethics and global health, who observed that Catena is “still redefining the line of scrimmage.”

An alumnus of the Duke University School of Medicine, Catena spoke about the mental, physical and psychological challenges of his work and about his faith, which sustains him.  His lecture, “Gratitude in Action: One Doctor. One Hospital. One Million Patients,” represented the inaugural Thomas Gerard Catena Lectureship.

In 2008, he helped found the Mother of Mercy Hospital in the Nuba Mountains. The hospital has been bombed multiple times and remains under threat of attack.  Catena is on call 24 hours a day, 7 days a week; he typically sees between 350 and 500 patients every day on ward rounds and must sometimes work without electricity or running water.

His patients, who have been known to walk for 7 days to receive treatment, often arrive at the hospital suffering from an ectopic pregnancy, starvation, tumors, leprosy, tuberculosis or injuries from bombing attacks. Catena estimates he performs more than a thousand operations a year.

He described a “moment of truth” when the aerial bombardment of civilians by the government of Sudan had gotten worse, and he was urged to leave.  He knew that if he left, people would die.  He stayed, rejecting the idea that “my life is worth more than the lives of the people I’m serving here.”

He also described the “visceral fear” he experiences during bombings.  He recalled that the first time his area was bombed, he was at church.  “I had this overwhelming urge to burrow myself in the ground.  I wished I were an ant … It’s a terrifying feeling, and there’s no way to deal with it.”

Duke Divinity School has received a $300,000 gift to endow the Thomas Gerard Catena lecture series, which will be administered by the Theology, Medicine, and Culture (TMC) initiative of Duke Divinity School, in partnership with the Duke Global Health Institute and the School of Medicine (via the Trent Center for Bioethics, Humanities, and History of Medicine).

In future years, in tribute to Catena, the lectureship will invite speakers whose work displays innovative scholarship, service and institution-building at the intersection of theology, medicine and culture.

Catena graduated from Brown University, where he earned a degree in mechanical engineering. He then attended Duke University School of Medicine on a U.S. Navy scholarship.  A Davison Scholarship enabled him to undertake a clinical rotation in Kenya.

He shared that he had grown up Roman Catholic in “a very devout family.”  He said he was inspired by a quote attributed to St. Francis: “Preach always; and if necessary, use words.” In daily Mass, he prays for strength, guidance and wisdom.

The Nuba people live in a remote and nearly inaccessible part of Sudan and rely almost completely on sorghum and okra for food. The ongoing war since 2011 has subjected the Nuba to food insecurity: farms and stores of food are often destroyed by bombs, and malnutrition and starvation are widespread.  Catena described his deep attachment to the Nuba community and his admiration for their generosity, willingness to share what they have and their “radical reliance on God.”

He also described his efforts to build health care capacity in Sudan, by providing on-the-job, hands-on training, as well as by sending his hospital colleagues for training as nurses, pharmacists and clinical officers.  A few have gone to medical school.

He acknowledged the limits on his diagnostic and therapeutic capabilities in a hospital with scarce resources.  “For the first 10 years, we didn’t have an x-ray.  It’s amazing what you can treat without technology; having said that, it’s nice to have an x-ray.”  He then shared that he himself had been the first patient to use the x-ray machine—which revealed that he had tuberculosis.

He urged the members of the audience to use their education and their opportunities for the good of others.  “Everybody does have something to contribute.  It is going to take some time and introspection to see where your talent and abilities are, and how you can use that to the benefit of somebody else.”

From Ancient Rome to Small-Town Mississippi, New Books by Duke Authors Capture the Imagination This Spring