Inspiration and innovation is pretty much year-round at Duke these days. But November is Duke Innovation Month, the highlight of which has become the “Invented at Duke” celebration, which was held for the third time Tuesday night.

More than 350 people from the Duke and Durham communities milled around Penn Pavilion talking to inventors, handling their prototypes and asking penetrating questions about their business plans.

“There’s a lot of energy here,” said first-time participant Kamran Mahmood, a pulmonologist who has co-developed a new catheter-based biopsy tool with the help of his colleague Don Pearce, an instrument maker in the medical center. 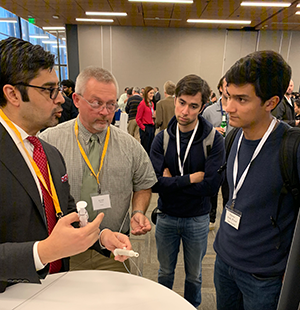 Their tool, U-Core, is a super-sharp cutting device to replace the suction that is normally used to biopsy a person’s lungs, Mahmood explained. It’s like a needle with a scooped out middle and a trap door cover that snaps forward over the gap with impressive authority to capture the tissue sample.

This tool grabs only solid tissue, not all the liquid that suction biopsies normally return, making pathology simpler and reducing the number of samples that need to be taken from the lungs. “We don’t want the liquid,” Pearce said to a pair of curious undergraduate engineers.

Two tables over, a software startup is offering to protect university computer networks from cyber intrusions. The company’s acronym – STINGAR -- is “a bit tortured,” acknowledged co-founder Tracy Futhey, VP and chief information officer for the university. But it’s descriptive at least: STINGAR is Sharing Threat Intelligence for Network Gateway with Automated Response.

A collaboration of Duke OIT leaders and faculty computer scientists, the STINGAR system sets out ‘honey pots,’ bits of code that look like vulnerabilities, and lets the attackers swarm in.

“Some will have the door slammed on their fingers,” explained John Board, an associate professor of electrical and computer engineering and associate chief information officer for the university. Others will be allowed to linger a bit while the software learns as much as it can about them.

This intelligence about attackers is then immediately shared across the network of users to make their security tighter. “It’s also creating a treasure trove of research data,” Board said.

About a third of Duke’s innovations now are in the digital space, said Robin Rasor, executive director of the Office of Licensing and Ventures, which throws the annual party. 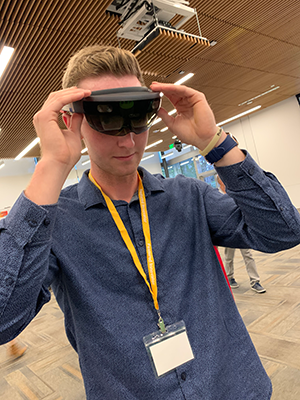 Michel Klien, an associate professor of the practice of dance, had a steady crowd at his table asking questions and handling the Hydrean, a meditation tool he invented. Like rosary beads, the Hydrean is a tactile tool for mindfulness that might double as a beautiful piece of metal jewelry.

Three of the inventions being shown off were from undergraduate students. Beryl Baldwin’s device is a simulated human breast with a small nodule in it to help women understand what they should be feeling for in a breast self-exam. Senior Tim Shapek and recent graduates Clark Bulleit and Kevin Gehsmann have grand visions for Protect3d, their company to make bespoke splints and protective sports equipment with 3D scanning and printing. And Erikson Nichols was showing off a prototype of his augmented reality technology to help brain surgeons plan surgeries in 3D.

Invented at Duke is a mingling, standup party, but there’s still a keynote speaker.

This year, Precision Biosciences co-founder Derek Jantz briefly told the tale of his company’s journey from a couple of biochemistry postdocs with an outlandish idea to a publicly traded company with more than 200 employees in Durham, despite some protracted patent lawsuits and missed payrolls along the way.

“It’s 13 years of drama and really good stories that I don’t have time to tell,” Jantz said. Though the audience of innovators and investors clearly wanted to hear more.