The only thing missing from a new digital humanities exhibit in the entrance of Perkins Library about the glories of Venice is the present-day sight and smell of the canals that carry people throughout this remarkable floating city.

Otherwise, the exhibit produced by four Duke undergraduate students working with Professor Kristin Huffman and an international team of digital storytellers immerses visitors so they can experience the city as European visitors did in the 16th, 17th and 18th centuries. 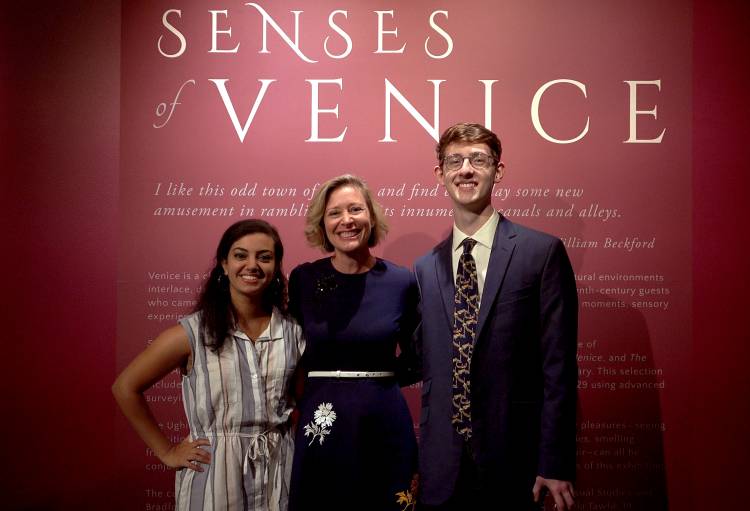 In doing so, the exhibit features Duke’s innovative opportunities for undergraduate learning, digital storytelling in the humanities, and several remarkable true-life personalities that made Venice a destination for travelers during this period.

“We wanted today’s visitors  to understand why Venice was such an important destination for travelers during the early modern period,” said Kristin Huffman, a lecturing fellow in the Department of Art, Art History, and Visual Studies. “The students saw in their research how different cities on the Grand Tour had particular identities for the visitors. Rome was studied for its antiquities. 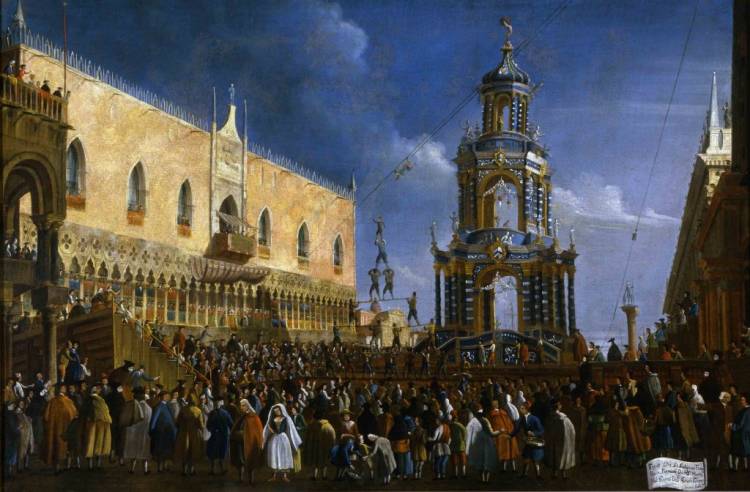 “But Venice specifically sold itself as a world apart. They put on a show for visitors.  Venice was a place of excitement, games, ceremonies and festivals. Carnival was an important time for travelers. However, there’s an intellectual center to the city as well.  One point the students realized in their research was that places for parties and gambling were also sites for intellectual exchanges. That complexity, which extends to the city as a whole, was an important part of the attraction.”

While the exhibit relies heavily on digital technology – including an interactive screen and projection where visitors can follow four real-life characters through a typical day for them in Venice -- the centerpiece is one item representing a medium that is centuries old: A map of Venice printed from an engraving created by Ludovico Ughi in 1729.  The map was a quintessential souvenir for visitors on the Grand Tour. The Rubenstein Library acquired a rare copy several years ago. 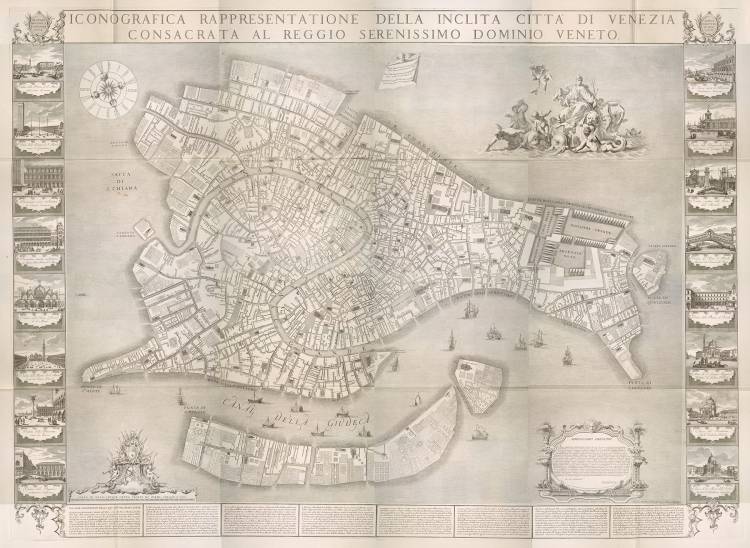 The exhibit was two years in the making and while Huffman directed the project, much of the work was done by four undergraduate students: Noah Michaud, Angela Tawfik, Daphne Turan and Mary Kate Weggeland. Their journey included a visit to the city where they took 360 degree photographs and walked the destinations they planned for the personalities in the interactive exhibit.

Venice of course remains a leading tourist destination, but this project took the students to off-the-track sites through the city. “We were taking photographs like everyone else there, but we were seeing it through the lens of the 18th century,” said Tawfik, who graduated in 2019. “We had to find places that literally didn’t exist anymore and approximate where this building had been and imagine what it looked like from the information we could find.” 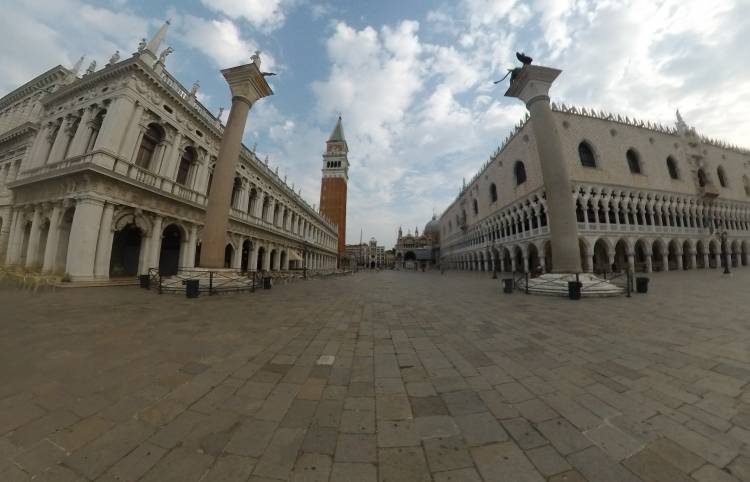 The students were members of Huffman’s class on Renaissance Venice two years ago, and they all worked together each week in the Wired! Lab. With funding from Wired!, the Office of Undergraduate Research and the Office of Global Affairs, the students said they treasured the opportunity to do original studies that stretched their learning experience.

“I knew Duke was a place where students could find innovative academic collaborations, for undergraduates to work in disciplines that otherwise would remain in their silos,” said student Michaud.  “This was my opportunity to get that kind of Duke education, to work with art historians, media and digital technology specialists, computer scientists and even a Hollywood producer.” That would be Brad Lewis, who advised students on their digital storytelling. 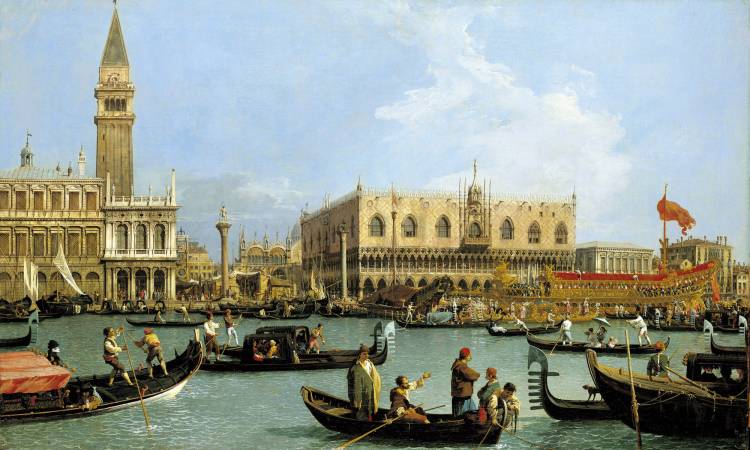 Collaboration on the exhibit was international, as well as interdisciplinary. Technical assistance came from Duke’s Wired Lab, staff at the Office of Information Technology and Duke Libraries, a Milan digital studio and architects at the University of Padua.

The work also opened up other opportunities for the students. There’s a possibility for the research to lead to a journal article, Huffman said, and Tawfik was selected to present the project both at an academic conference and at the Trinity College Board of Visitors.

With numerous interactive elements offering information ranging from the life of the famous lover and memoirist Casanova to a deep dive in the origins of copyright law in Venice, the exhibit has enough material for a visitor to spend hours in the library lobby. But the students said they knew most of their peers can’t do that.

“The library space allows us to reach a wide audience, but we know students come through wanting to get to the library to study,” Huffman said. “We designed this to be a study break, a place of escape. People could take 15 minutes if they want to step back into the 18th century before returning to biochemistry.”

Tawfik added that they designed the exhibit to “engage people’s senses.”

“The whole thing is about senses, not just sight or sound, but also smells of the fish in the market, and the music of the time. We wanted to get people to use touch and to play with the exhibit. Each time you go through the exhibit, what you see and hear might be slightly different.”