When Tallman Trask III came to Duke as executive vice president in the summer of 1995, his first assignment was figuring out how to feed the 1,500 incoming students who were weeks away from descending on East Campus for the inaugural freshman campus experience.

The decision to house all first-year students on East was itself a momentous and somewhat controversial decision for the university, and when Trask arrived in August the project was over-budget and behind schedule.

So Trask and his team worked round-the-clock to set up the dining spaces and systems that would ensure students could get breakfast, lunch and dinner, hot and on time.  When the students did show up, they had no idea how close they had come to a diet of dry cereal and peanut butter and jelly sandwiches.

Now, almost 25 years later, some of the children of those East Campus pioneers are eating, living, studying and performing in impressive new buildings that bear Trask’s imprimatur. They are also connected to digital networks and services that were conceived and built under his leadership. And they take full advantage of a downtown Durham that he helped reimagine and undergird through a financial foundation — including an endowment that has grown ten-fold since 1995 — that he kept secure through some of the greatest economic disruptions of the last half-century.

“It’s been a rewarding ride,” said Trask, who will retire as Duke’s longest-serving chief financial and administrative officer in the fall of 2020.

“Tallman will rightfully be remembered at Duke for his steady transformation of our campus, as he delivered a modern, indeed spectacular physical plant that better promotes the health and well-being of all who work and live here,” said President Vincent E. Price. “But many of his most meaningful contributions aren’t marked on any campus map: he helped grow and solidify our resource base to better serve our academic mission; he safely guided us through the financial crisis; and he championed renewed investments in financial aid, downtown Durham and environmental sustainability.  Tallman has also provided invaluable mentorship and leadership to an entire generation of Duke employees. We are so very grateful for his service.” 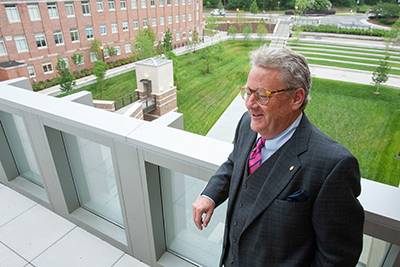 He is an ex-officio member of the Board of Trustees’ committees on Resources and Audit and Compliance. He also serves on the DUMAC Board of Directors, the Duke University Health System finance committee, and holds a faculty appointment as adjunct professor in the Program in Education.

Trask has played a key role in the development of downtown Durham, most notably working closely with business and civic leaders to resuscitate the long-abandoned American Tobacco Company complex.  He helped create a public-private partnership that led to moving a significant number of Duke employees and offices to the center of the city, and the creation of a vibrant commercial and entertainment district.

The success of American Tobacco and the Durham Performing Arts Center, also championed by Trask and supported by a significant investment from Duke, sparked a renaissance in Durham.  Today, Duke has more than 3,000 employees occupying more than two million square feet of leased office and lab space downtown.

A third-generation native Californian, Trask graduated from Occidental College, received an MBA from Northwestern University and a Ph.D. from UCLA.  He came to Duke from the University of Washington, where he was executive vice president from 1987-1995.  He had previously served as vice chancellor for academic administration at UCLA.

Trask serves on the Research Triangle Foundation Board of Directors and its executive committee and chairs its investment committee. He was elected an honorary member of the American Institute of Architects in 2003. The American Dance Festival dedicated its 2010 season to him, and in 2013 he was named “Terry Sanford Citizen of the Year” by the Durham Boy Scouts.

A search committee to identify his successor will be announced shortly.

Behind the Scenes: Duke’s School of Nursing Building Reopens