At Duke’s first DEMAN weekend, turnout for Pola Changnon’s panel was so sparse that she combined it with another, under-attended talk to make one slightly larger, informal conversation.

That was a decade ago, when DEMAN — short for Duke Entertainment, Media and Arts Network — was a fledgling attempt to bridge the gap between Duke alumni working in entertainment and current students aspiring to join them.

Changnon, a 1985 Duke alumna who is now an executive with Turner Classic Movies in Atlanta, has returned to campus for most DEMAN weekends since and says she’s inspired by how far the event has come as it prepares to celebrate its 10th anniversary in early November.

“There just wasn’t a huge awareness in that first year, and it’s hard to market these things the first time,” she said. “But there was definitely interest from alums to give back.”

Since it began, interest in DEMAN — from alumni, students and, importantly, faculty in Duke’s arts departments — has risen steadily. From those humble beginnings in 2009, when about two dozen alumni and 120 students participated, the event has flourished. In 2018, 110 alumni signed on as speakers and nearly 700 students registered for the weekend.

This growth not only illustrates that event organizers hit their collective stride in putting on a good event; it also reflects the steady rise of the arts culture at Duke. Fueled by targeted investments in faculty, programs and facilities — with the 2018 opening of the Rubenstein Arts Center as a new centerpiece — this culture has moved from the periphery of campus to its center.

This year’s DEMAN Weekend on Nov. 1-2 will feature more than a dozen workshops, panel discussions and social events that bring together students and alumni in an increasingly broad swath of entertainment-related careers.

DEMAN’s roots reside far west of Duke, in southern California. Dating back to the 1990s, a group of active Duke alumni working in the Los Angeles area held networking events and small get-togethers that created a sense of community for those with similar professional interests. That group — Duke in Hollywood — eventually lost some momentum as its leaders became more immersed in their careers; but then about a dozen years ago its members connected with Sterly Wilder, Duke’s associate vice president for alumni affairs, and discussed ways to forge stronger connections between the university and many alumni in the entertainment industry. That led to the eventual return of Duke in Hollywood, through which DEMAN was born.

“A lot of alums at that time didn’t have a relationship or connection with Duke. I thought that people, if they got more engaged with the university, would feel more of an allegiance to it,” said Duke in Hollywood founder Fred Goldring, a 1979 Duke graduate who spent decades as an entertainment lawyer and is now a technology and media entrepreneur in Los Angeles. “Duke had a big network out here, so getting people together with a common bond really built on itself. The Duke bond is really strong.”

Goldring worked with Wilder to get DEMAN off the ground a decade ago. It debuted in fits and starts, with some marketing challenges and a very basic T-shirt and logo.

“But the alums enjoyed being together,” Wilder recalled. “We had this DEMAN breakfast and all these alums were there but didn’t realize they all lived near each other in Los Angeles.”

These new connections led alumni to invest again in DEMAN, and participation grew each year.

As more alumni got involved, campus organizers sought ways to interest more students and faculty members. Scott Lindroth, the vice provost for the arts, knew that faculty in the academics arts departments would play a key role in DEMAN’s growth over time. He also knew it might be a tough sell.

“At the start, the typical DEMAN alum was an executive in a management organization or working for a large film company or media conglomerate,” said Lindroth, who is also a music professor. “The arts departments didn’t recognize themselves in that portfolio. So we said to the faculty: ‘Who are the students you’re most proud of? Let’s bring them back.’”

Following the lead of the theater studies department, which tapped its active alumni network to create popular DEMAN panels, other departments quickly followed suit, Lindroth recalled, eventually attracting alumni who were younger and in the earlier stages of their careers as artists.

“Young alums tell a very different story than well-established alums,” Lindroth said. “It opens up a space to discuss a foothold as a professional musician or dancer or choreographer. Students take encouragement from hearing that there is no single pathway to a career in the arts

“So our tent got bigger.” 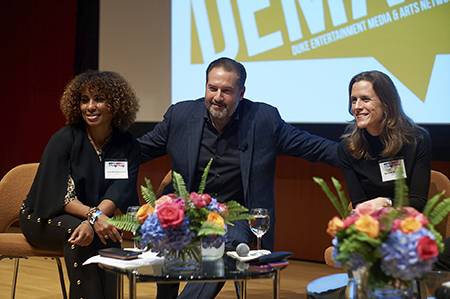 That tent has expanded even more as entertainment industries themselves have done so, said Amy Unell, a 2003 Duke graduate who has played a critical role in organizing DEMAN and other projects that connect students with alumni in entertainment and other ‘creative’ fields. This year’s panels will include one examining technology and engineering and feature Duke alumni working at Facebook and Buzzfeed, for example.

“So now we have all these engineering students coming to DEMAN, and students from the law school and business school,” said Unell, Duke’s senior director of arts engagement and partnerships. “It’s a really interesting intersection of creatives.”

Wilder, the longtime head of the alumni association, said she hopes students leave DEMAN Weekend with one critical lesson about careers in entertainment and creative industries.

“There is not a linear path to getting jobs in arts and entertainment,” she said. “You have to have connections and know people and figure out what people do. You have to meet people; if you can’t meet people, you can’t do it.”

Duke students, alumni and faculty and staff can register now.

Want to go into the entertainment business? 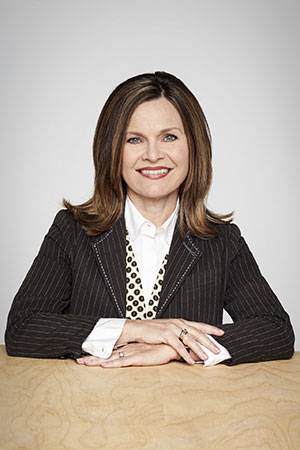 Incorporating Fun in the Workplace