You can hear the traditional music of China for yourself. The Duke Chinese Music Ensemble, led by Jennifer Chang, will have a free performance at 5 p.m. Sunday, November 17 in the Nelson Music Room.

What she does at Duke: Originally from China, Chang came to the United States 18 years ago and became a sought-after performer and teacher of traditional Chinese music. In 2018, at the urging of her friend and collaborator Hsiao-Mei Ku, a Duke professor and Ciompi Quartet violinist, she came to Duke to start the Chinese Music Ensemble.

The mission of the group is to give students a deeper understanding of Chinese musical culture and provide an opportunity to learn and perform Chinese music on both traditional and western instruments.

“I’m here to help Duke offer students an opportunity to explore,” Chang said. “Chinese music is still one special style in the world of music. What I’m doing is to giving anyone who’s interested a chance to know Chinese music, to play it and feel it.” 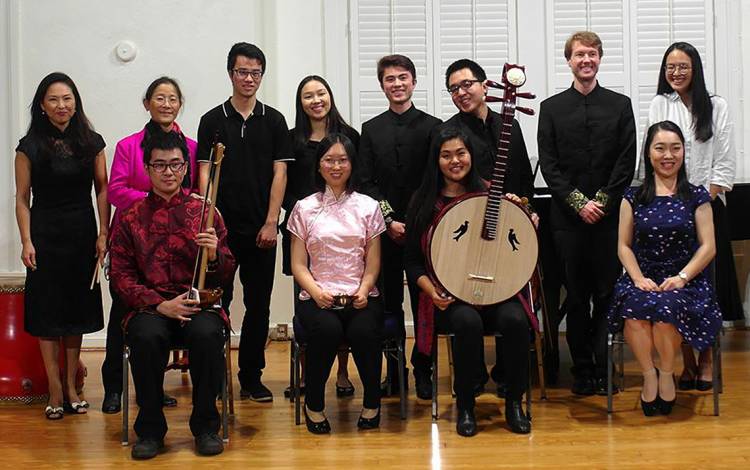 After spending two decades building a career as a solo artist and instructor, Chang teaches the Chinese Music Ensemble class, helping Duke students get familiar with instruments they’re likely playing for the first time. Among the instruments are the tabletop harp known as a guzheng, an upright lute known as a ruan and traditional wooden drums. Chang also rearranges musical selections in order to be played by an ensemble, which also uses some western instruments and often varies in size and skill level.

Chang not only enjoys sharing the music she grew up playing, but also exposing the ideas and instruments of Chinese music to students who may help take it in new directions.

“Right now, I think in the music world, all kinds of cultures and instruments are coming together to make new music. It’s all very exciting,” Chang said.

What she loves about Duke: When she arrived at Duke, Chang faced the challenge of teaching students and building her ensemble while also getting familiar with her new campus and department. She said that she gained a tremendous amount of appreciation for the staff and faculty of the department as they made that transition easier, helping her find instruments and rehearsal space.

“I didn’t have to worry about much, I could concentrate on the music,” Chang said.

A memorable day at work: Last fall, heading into the Chinese Music Ensemble’s first concert, Chang said group members were nervous about performing pieces of Chinese music they’d been working on for a few months. But by the end of the night, Chang was thrilled with the show the ensemble put on.

“It turned out great, everyone loved it,” said Chang, who will lead the ensemble into another performance this fall.

First ever job: In college, Chang performed the guzheng professionally at the Shaanxi Grand Opera House. She was part of a show featuring music from the Tang Dynasty.

“I was pretty good,” said Chang, who as a teenager was recognized as one of the country's top guzheng players.

“Everything will be fine, relax,” Chang said about a valuable lesson she’s learned. “The cultures are different. I really learned the way Americans see things. It’s good.”

Something most people don’t know about her: While many people know that Chang began playing music at an early age, the seriousness with which she pursued it isn’t always understood.

Starting at 12, Chang attended the Xi’an Conservatory for Music, an elite boarding school in Northwest China. It was there where she built herself into one of the top young guzheng players in the country.

“We didn’t just learn the technical ability to play the instrument, we also learned both Eastern and Western music and philosophy,” Chang said. “It really built my professional ability. Just because you learn an instrument doesn’t mean you can handle a concerto piece with a full orchestra.”

Said@Duke: Liam Collins on Why Ukraine Matters to U.S.