There’s a story about the beginnings of Duke’s new alumni and visitors center, and it goes something like this:

On a retreat with fellow Duke Board of Trustees members at Stanford University in 2014, then-board chairman and philanthropist David Rubenstein ’70 redirected the van carrying fellow members around campus and led the group on an impromptu tour of the university’s Frances C. Arrillaga Alumni Center—a sprawling 116,000-square-foot building studded with palm trees and boasting, beyond all the standard amenities of such a building genre, a café, a meditation garden and a free bike rental for alumni wanting a cruise around campus in the breezy California air.

Come to the Karsh Grand Opening

Please join fellow Duke staff, faculty, students and alumni for the official opening of the Karsh Alumni and Visitors Center. Tour the space, enter the raffle for Duke-UNC tickets and enjoy the company of hundreds of fellow Blue Devils.

A few days later, Sterly Wilder ’83, associate vice president for alumni affairs, got a call from Duke administrators asking her to meet with an architect. Two weeks after that, the Duke trustees launched a task force to study how to make Duke’s alumni association the “best in class.” A few months after that, Wilder says, the alumni affairs strategic plan had a brand-new directive: Build a home for alumni on campus.

“Rarely am I speechless,” Wilder said. “I was completely blown away.”

Scrub through a time-lapse of events, and it’s early September of this year. Wilder is at the newly opened Karsh Alumni and Visitors Center, a 48,000-square-foot complex named in honor of former Duke trustee Bruce A. Karsh ’77 by his wife, Martha. Perched at the corner of Duke University Road and Chapel Drive, the center’s main building is the first landmark visitors now see as they enter the university—a gleaming, arched glass façade set against an atrium resembling Duke Chapel’s nave.

Wilder is walking through the complex, across a perfect green lawn designed to mimic Duke’s West Campus quad, strolling through an events pavilion built with wood reclaimed from Duke Forest, pausing to talk to visitors in essentially a campus living room bolstered by more than 50 alumni donors. 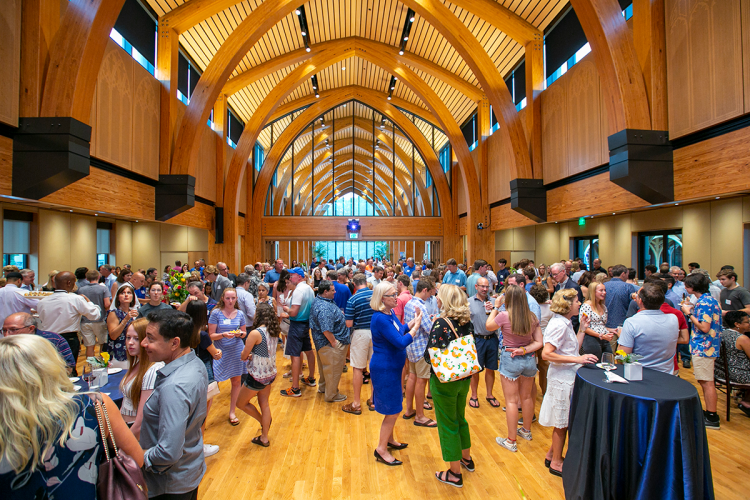 “To be able to put this in the heart of campus, where everybody can access it—it says to me the center really is such a critical part of the Duke experience,” Wilder said. “I want to figure out: How do we leverage that for everybody’s good?”

Some of the answers are within the center, a place President Vincent E. Price has said will give “the entire Duke community a space to gather, celebrate and connect over all things Duke.”

It will be the first stop for visitors coming to campus. Prospective students will attend admissions information sessions and go on tours. But it also will be a place for current students and alumni. There are clusters of couches, chairs and tables for informal meetings. There is a 3,900-square-foot events space for hosting alumni events, such as Homecoming and undergraduate Reunions Weekend. There are small conference rooms, a library with old Chanticleer yearbooks and alumni books and a market with grab-and-go snacks.

Altogether, a “welcoming home” for alumni and visitors and a “front door” for the university—two phrases used often by Laney Funderburk ’60, the late director of alumni affairs who preceded Wilder and who championed a Duke alumni center in the early 2000s.

Both of those descriptions are scribbled on notes for a Duke alumni and visitors center, set neatly in worn Alumni Affairs files that date back to 1987.

“To be able to put this in the heart of campus, where everybody can access it—it says to me the center really is such a critical part of the Duke experience,” Wilder said. “I want to figure out: How do we leverage that for everybody’s good?”
-- Sterly Wilder

The files also contain a detailed proposal for an early visitors center of the 1980s championed by Mac Mauney M.D.’59, a late, former board member of the Duke Alumni Association, that calls for a center modeled after a shopping mall—complete with a travel agency, a gift shop and a “modest theater similar to those at museums and national parks across the country and at theme parks” to tell visitors the Duke story.

Early iterations aren’t too far off from the center that Duke actually built; decades later, there are contemporary interpretations by Connecticut-based Centerbrook Architects & Planners and alumni affairs staff.

Funderburk’s idea for a history room at the center, for example, found its next generation in a touchscreen wall that provides a detailed timeline of Duke from its beginnings at Brown’s Schoolhouse in 1838 to today, notable alumni, video montages and donor and student stories.

Mauney’s idea for a letter board announcing the names of visitors found its mirror in the Duke Alumni Association’s mobile app, which alumni can download to get a curated experience at the wall—including a personalized greeting by name.

Talk to anyone involved in the Duke alumni center dream over the last two decades, and they will tell you there were fits and starts. Identifying viable property was trying. Other campus construction projects took priority. Fundraising took time. 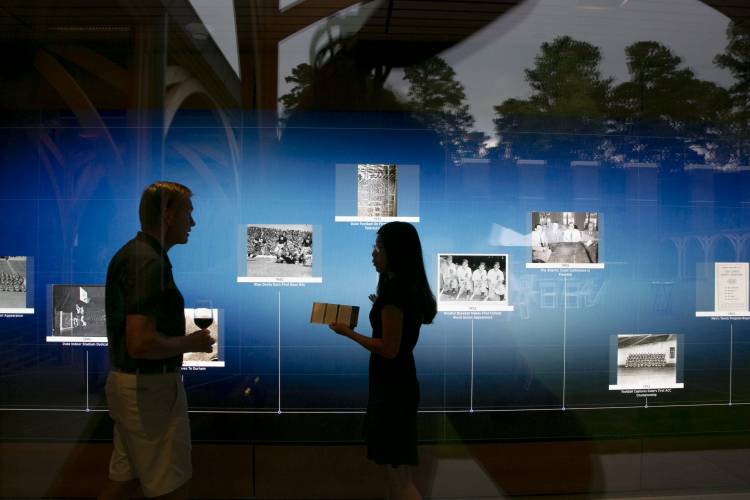 But in 2014, after the trustees visited Stanford, something clicked.

“It was a singular moment in time, where a vision for the future coincided with university leaders and the Board of Trustees willing to invest in alumni and a world-class facility,” said Shep Moyle ’84, who championed the most recent alumni center plans as president of the Duke Alumni Association’s Board of Directors.

Past presidents of the DAA board launched a calling and email campaign to deliver nearly a half-million dollars to the center. Alumni rallied with gifts reflected in every part of the center. Lead donors began to support the $32-million cause.

Bruce A. Karsh ’77 and Martha Karsh, who provided the lead gift for the center, have been longtime supporters of the university, giving Duke’s largest donation to date for a permanent endowment for need-based student financial aid—a gift of $50 million in 2011. They hope the center will be a place where both alumni and students can begin their journey at Duke, Martha Karsh said.

“Bruce and I hope that both current students and alumni will have a moment to celebrate and enjoy their good fortune to be part of the Duke family,” she said, “and to reflect on how they might support and serve the institution, and world beyond, as they follow their own personal life journey.”

The People Behind the Rights We Cherish