Anyone who says females are the ‘gentle sex’ has never met a lemur. Lady lemurs get first dibs on food, steal their mates’ favorite sleeping spots and even attack males, swatting or biting those that annoy them.

What gives these female primates the urge and ability to reign supreme while the meeker males give in or get out of the way? New research suggests that female lemurs’ bullying behavior may get programmed early, before birth.

A Duke University study shows that a mother lemur’s hormone levels during pregnancy can have long-term effects on her daughters. Female fetuses that are naturally exposed to higher doses of a sex hormone called androstenedione while still in the womb grow up to be more aggressive as adults, researchers report.

Understanding female domination in lemurs has been a puzzle, said lead author Nicholas Grebe, a postdoctoral associate working with Duke professor Christine Drea. Female lemurs are no bigger or brawnier than their male counterparts. Nor are they better armed with horns or tusks like some male animals.

Testosterone levels are significantly lower in females than males too. If the “aggression hormone” doesn’t explain females’ drive to run the show, the researchers wondered, could other hormonal pathways shape their behavior in some way?

For the study, Grebe, Drea and colleagues followed 24 young lemurs from three to 30 months of age, collecting blood and observing their behavior from infancy to adulthood at the Duke Lemur Center.

The researchers watched the lemurs play for 20 minutes at a time, noting every time they chased or wrestled with a playmate; who instigated and who was on the receiving end; but also when their horseplay crossed a line from play fighting to real fighting.

The researchers also had blood samples collected from the lemur moms during each trimester of pregnancy.

Blood hormone test results confirmed that lemur males have much more testosterone than females: 17 times as much. Yet when it comes to being rough and rowdy, girl lemurs play-fight about as often as boys. And once they reach puberty, females but not males quickly cross a line from play to abuse.

The team found no link between a lemur’s hormone levels while they were growing up, and whether they were more likely to be on the giving or the receiving end of aggression. But hormone exposure before birth was a different story.

The researchers found strong links between hormones circulating in a mother’s bloodstream during late pregnancy and aggressive behavior in her offspring later on, particularly in females.

While in the womb, developing lemurs are bathed in high doses of the hormone androstenedione, known to increase in lemur moms during pregnancy. Female fetuses that were exposed to higher doses of androstenedione in utero were less likely to be bullied while growing up.

The findings suggest that prenatal exposure to the hormone has lasting effects on their development, permanently programming their bodies and brains in a more aggressive direction.

“The prenatal hormonal soup that lemurs were swimming in before they were born predicted their behavior later on in life,” Grebe said. 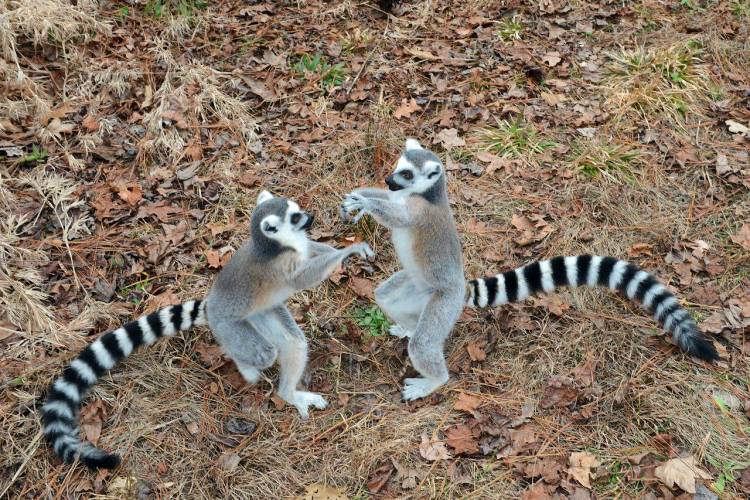