As the state prepares for Hurricane Dorian to bring heavy winds and significant rains to the coast and eastern North Carolina, Duke faculty members are explaining what they're looking out for this season, and what steps you should take to be prepared.

At the recent “Coming Storm” conference, Stanback Dean Toddi Steelman of the Nichoas School had a message: Global warming is creating stronger storms, and we’re not prepared for them.

“We need to get better at anticipatory planning -- anticipating what’s to come,” Steelman said. “Our data all look backwards for the most part.  We plan based on historical trends, not on what the future has in store for us. So how many years in a row have we witnessed an event that happens in a 100-year flood plain? What we really need to be thinking about are 500-year floodplains and 1,000-year floodplains.”

“Disasters are equal in that they do affect everyone but they also discriminate. We know that those who are most vulnerable – the poor, the disenfranchised, the disabled and the elderly – suffer the greatest in these events," Steelman said. "And they continue to suffer long after those of us with more resources have been able to recover.”

We are still a few days away from Dorian bringing heavy winds to North Carolina, but Pratt professor Ana Barros says conditions are ripe for strong storm surges across the coast.

“Many things may change as demonstrated by the potential track area, the High Sea Surface Temperature increases the risk of storm surge and strong winds,” said Barros, an expert on hydrometeorology, climate predictability, extreme events and risk assessment of natural hazards.

“Presently, the forecast places Dorian along the North Carolina Coast on Thursday/Friday, likely on Friday. No matter what happens, persistent heavy rainfall and consequently flooding should be expected over the Coastal Plain."

“Again, it is (a few) days out from affecting the North Carolina coast, and while we have simulated hurricanes in my group, we do not have yet the capabilities to localize forecasts with such long-lead times, though we are working on developing such capabilities using Big Data methodologies.” 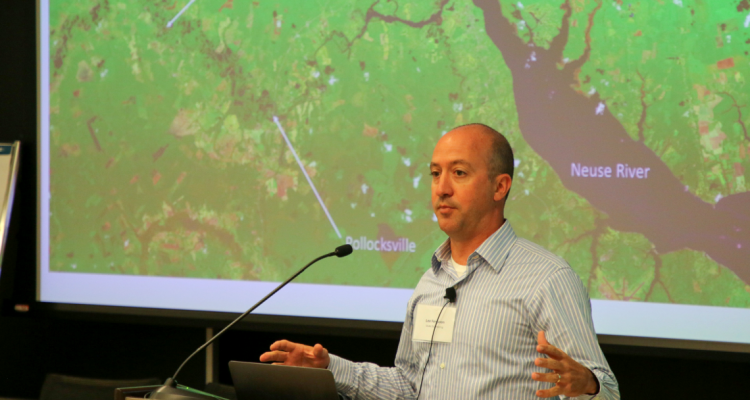 Professor Lee Fergusonne is one of the lead scientists investigating the Cape Fear GenX contamination issue and the subsequent program to search for other potential pollutants. He is watching for the effects of flooding and the dangers lurking for contamination from sources such as chemical plants, hog farms and sewer treatment systems.

Ferguson, a faculty member in the Pratt School’s Department of Civil and Environmental Engineering, recently spoke about how flooding and storm surges in eastern North Carolina following Hurricane Florence likely contributed to a rise of toxins in drinking water. One was Gen X, a family of chemicals produced in a industrial factory on the Cape Fear River. These are very long-lasting chemicals, Ferguson noted. “I like to say they’ll still be around when the sun goes supernova.”

“It's probably not the greatest thing to be putting in our drinking water,” Ferguson said. “When we looked in our samples, especially from the Cape Fear River during the flooding, you see this spike in bars right there at the site that is directly downstream of the Chemours plant. Now this sampling was done long after Chemours stopped discharging their industrial waste into the river. So why are these compounds showing up in the river during the flooding from Hurricane Florence? It turns out that the groundwater around the site is extensively contaminated with these chemicals. … And when you have flooding and inundation … it can wash out those compounds into the rivers.”

We're getting better at predicting hurricane paths, but there's a lot more to learn. In a Pratt School podcast, Andrew Bragg, an assistant professor of civil and environmental engineering, explains the latest models.

We’re all now used to watching maps that run different potential paths running through the ocean like lines of spaghetti. It’s frustrating to scientists and the public alike that there is so much variation between the projected paths. The difference between a glancing blow and a direct hit is significant.

Bragg said hurricanes are so complex that meteorologists can never make perfect, precise predictions, but knowing how to read these ensemble of data we can make meaningful predictions. And with each hurricane, we learn something that can make the modeling of the next one better, Bragg said.

“You run the model many times using the different initial conditions, and that creates an ensemble of predictions. These predictions allow you to say, ‘I don't know exactly where the hurricane is going to make landfall, but I can say statistically, within a certain amount of probability, where it's going to land and what category it's going to be when it makes landfall.’”

Listen to the podcast here.

When the Levees Break

In some cases, the worst damage comes after the storm moves through. The Pratt School’s Nathaniel Chaney says machine learning and satellite information are helping scientists make better flooding predictions.

But Chaney adds that with increased urbanization of high-risk areas, as well as the heavy-clay soil content of the region, maker for the perfect “ingredients for the persistent flood risks.”

“Here in North Carolina, especially in the Piedmont, our soils are mostly clay, and water infiltrates at a much slower rate through clay than through sand. Basically, the soil doesn’t soak up water as well,” Chaney said. “The water runs into streams, the streams overflow their banks and rush into the floodplains, thus enhancing the flood risk.”

Listen to the podcast here.

The Dangers of Generators

Duke's Dr. John Jacob Freiberger, an associate professor of anesthesiology, discusses the dangers that can occur when generators are used improperly. Freiberger also explains how to safely use a generator after a power outage.

Get the Welcome Baskets Ready; DKU Students Heading to Duke