Eric Oberstein had plenty on his mind while on stage accepting the Grammy for Best Latin Jazz Album earlier this year.

Oberstein, who produced the winning album, “Back to the Sunset” by the Dafnis Prieto Big Band, needed to settle his nerves, thank several people and finish before the house band began playing.

“They let you know it’s time to get off stage,” said Oberstein, interim director of Duke Performances. “They’re not subtle.”

Three months later, when his Grammy arrived – they use stand-ins at the ceremony – there was much less pressure. All he had to do was sign for it at a FedEx store.

Winning prestigious awards can be the triumph of a lifetime. But after the ceremonies and celebrations, reality returns. The achievement – and the award itself – settle into the context of everyday life.

Oberstein, a Duke graduate who joined the Duke Performances staff in 2012, has a few such pieces. Prior to his most recent Grammy, he produced albums for friend and Latin jazz composer Arturo O’Farrill that earned two Latin Grammys and another Grammy.

“I find the skillsets for running Duke Performances and producing albums to be very similar,” Oberstein said. “Whether you’re presenting a performance or producing an album, there’s an artistic vision that, from a planning, strategic, marketing and budget perspective, you need to see through.”

Across a Duke workforce filled with bright, bold thinkers, there are staff and faculty who have reached the pinnacle of their craft. And there are a select number whose triumphs left them – and in some cases, all of Duke – with iconic mementos. 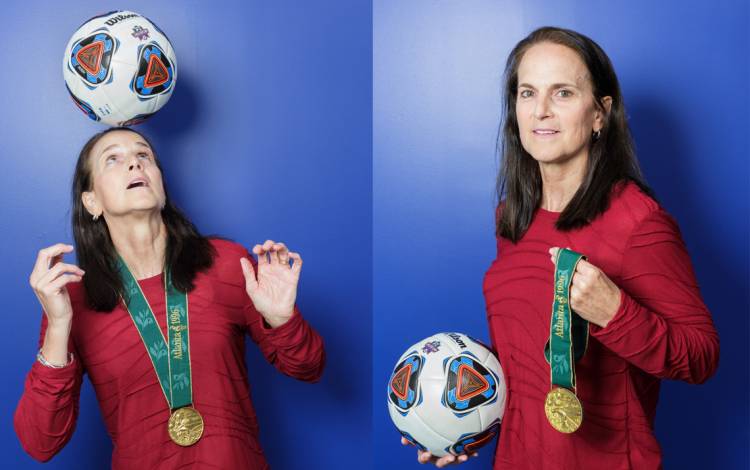 In the 1990s, Overbeck captained the United States Women’s National Team that captivated the nation by winning two World Cups and Olympic gold.

On long van rides, or during down time, Duke players often have questions.

“They’ll ask what it was like to play in front of all of those people, or how cool it was,” Overbeck said. “Being an Olympian, was that really neat?”

The 1996 Olympics were the first to include women’s soccer. And with the games played in the U.S., the women’s team won gold in front of friends and family.

“I don’t get all excited about stuff, or things, or awards,” Overbeck said. “But the Olympic gold medal is pretty cool.”

Overbeck loves sharing the thrill with others, often bringing her medal to speaking engagements and, following the Olympics, letting a UPS driver who delivered her soccer gear see it. She lets players from Duke women’s soccer team have a moment with it, too, providing a rare chance to hold their sport’s ultimate prize.

“I get enjoyment out of people’s reaction to it,” Overbeck said. “Most people don’t get to see one of these.”

Part of his story 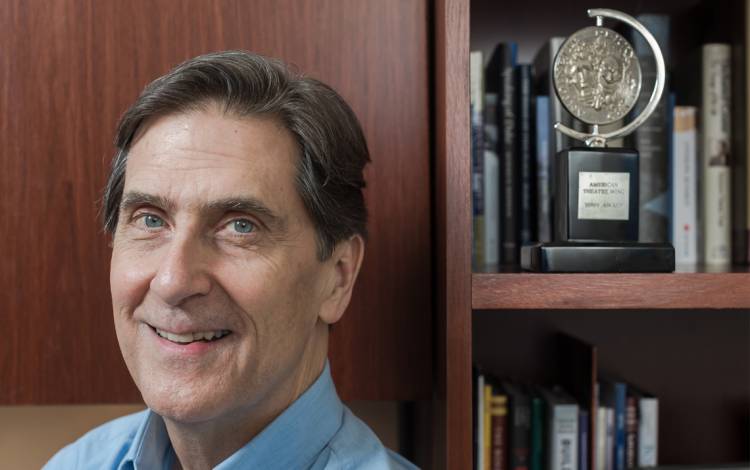 Occasionally, visitors to Richard Riddell’s Allen Building office ask about the small trophy sitting on a bookshelf. The silver medallion rising from a black base is instantly recognizable to any fan of theatre as a Tony Award, the American stage’s highest honor.

“It’s a reminder of a lot of great people working together,” said Riddell, Duke University senior vice president and secretary to the Board of Trustees.

In 1985, Riddell was a 35-year-old drama professor at the University of California San Diego and lighting designer for productions at the school’s prestigious La Jolla Playhouse. One show, “Big River,” reached Broadway and won seven Tonys, including Best Musical and, thanks to Riddell, Best Lighting Design.

“It was a lot of fun,” Riddell said. “We thought we had a decent chance of being recognized, but we were fortunate that it worked out the way it did.”

Part artistry, part engineering, using light to enhance stories on stage was an exciting challenge for Riddell. But as his academic career took him to Harvard and, in 1992, to Duke, his role as a teacher and administrator grew, leaving less time for professional theatre.

Now, the precise organization and preparation learned in theatre helps Riddell set the stage for the Board of Trustees to do its work.

Still, 34 years after the win, his Tony Award is part of a story that has enjoyed several more acts.

“It was a thrilling time,” Riddell said. “But also a very different time in my professional life.” 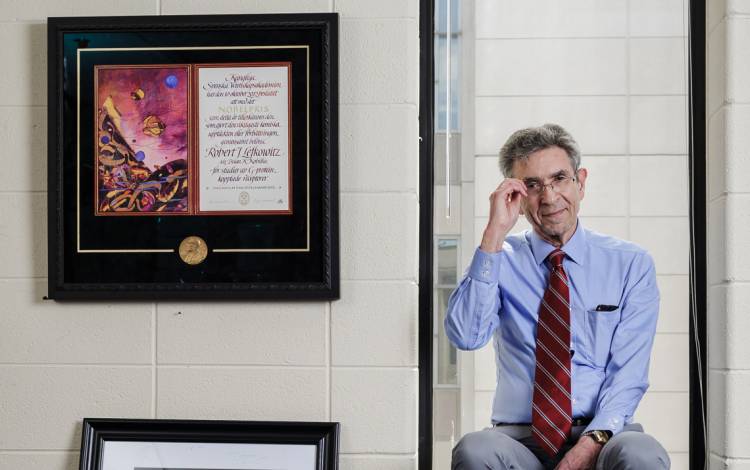 With no open space left on Robert Lefkowitz’ office walls, a backlog of framed certificates and plaques sits on filing cabinets and tables.

But the James B. Duke Professor of Medicine isn’t worried about his collection growing. There’s an unofficial rule in science circles that once someone wins a Nobel Prize, you don’t give them any more awards.

In 2012, Lefkowitz became Duke’s first Nobel laureate, earning the prize in chemistry for his breakthrough research on the protein receptors that help the human body’s cells communicate.

For Lefkowitz, 76, the experience was a joyous whirlwind.

“I was thinking ‘Am I dreaming? Is this all really happening?’” said Lefkowitz, who came to Duke in 1973.

When he tells the stories of meeting then President Barack Obama at the White House, sharing a stage with the King of Sweden, or explaining to customs agents why he was flying home with a solid 18-carat gold medallion in his carry-on, he does it with a can-you-believe-this mix of pride and astonishment.

Still at the helm of his lab, Lefkowitz’ life has long since returned to normal.

While his Nobel Prize is locked away in a safe-deposit box, he does have gold-plated replicas at home, in his office and in the lobby of the Trent Semans Center, displayed alongside the Nobel Prize that Duke biochemist Paul Modrich won in 2015.

“It gives me such a good feeling,” Lefkowitz said. “This is Duke’s. Science is a team sport. We won because of work performed under my direction by generations of Duke students and fellows. The Duke team won.”

Duke's Lab Benches Start to Reopen, But With Social Distancing

More than 1,500 researchers back in labs with more buildings to reopen shortly