In his new book, “Becoming Human,” (Harvard University Press, 2019) Michael Tomasello brings together more than two decades of his research on what makes humans unique. The book builds on Tomasello’s work studying young children’s development, and on the psychological processes that set young children apart from human’s closest living relatives, the great apes.

Duke Today asked Tomasello to describe some of the book’s key ideas. He is James Bonk Professor in the Department of Psychology and Neuroscience.

Q: How did you become interested in the question “What makes humans unique?” 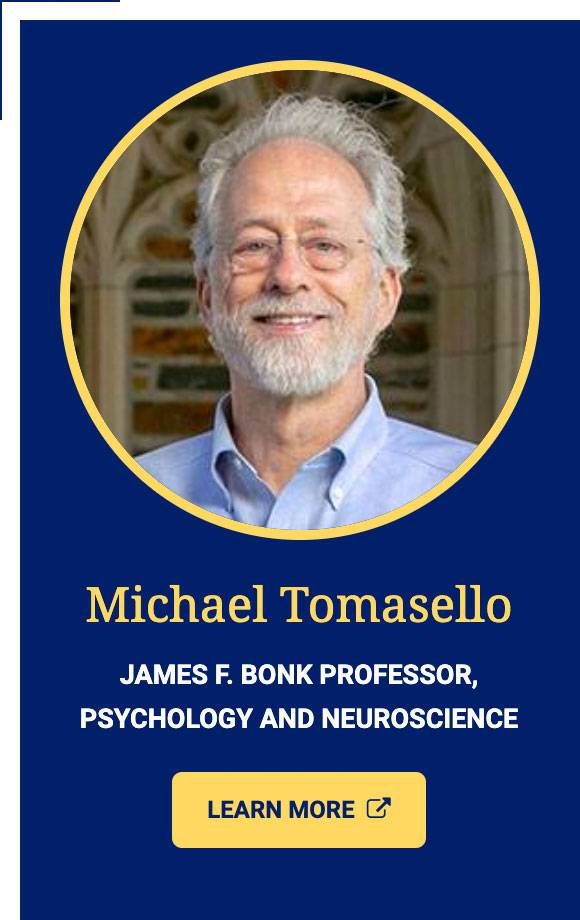 TOMASELLO: It’s a question that people have been asking for the entire history of the Western intellectual tradition. But we have approached it in a very concrete way by experimentally comparing the cognition and social behavior of humans to that of their nearest primate relatives. That was not always possible.

Aristotle and Descartes, for example, never saw a non-human primate, much less an ape. The primates were all wiped out of Europe by that time. Zoological Gardens were first established in the early 1800s. And so around Darwin's time they started housing monkeys and apes in zoos. Darwin met an orangutan, Jenny, in the London Zoo, and this was really quite formative for him. It gave him more courage to say that humans are also primates, because this animal, Jenny, was so similar to us.

Q: You draw from Darwin, Piaget, lots of different sources. Was it once thought that raw intelligence distinguished us from the apes?

TOMASELLO: One of our most important studies was a huge study we did with over 100 human children and over 100 chimpanzees. We gave them a big battery of tests – a big IQ test if you will. It covered understanding of space, causality, quantities, as well as social learning, communication, reading the intentions of others.

We found that 2-year-old children – before they can read or do anything mathematical – look just like the apes on physical things, such as causality, quantities and space. But in the social domain, they are already way ahead.

So it’s not just that humans are generally smarter, it’s that we have a special kind of smarts. We are able to plug into the knowledge and skills of other people and to take their perspective, by collaborating, communication and learning from them in unique ways.

TOMASELLO: So, the pointing gesture. Human infants typically start pointing at around 11 or 12 months of age, and when you point for them, they understand it immediately. Neither apes nor any other animals use the pointing gesture in their natural communication. So if a child is looking for something and you point behind the couch, they know you are intending to help them find the thing behind the couch.

With chimps, if they’re looking for something and you point … they’re clueless, absolutely clueless. They don’t understand that you’re trying to help them. Having unique communicative skills such as pointing - not to mention language as socially shared conventions - is absolutely essential in children’s development.

Q: Not only are humans social, you’ve called us “ultra-social.” Can you explain what you mean by that?

TOMASELLO: There are lots of social animals, but theirs is usually a fairly simple sociality. A herd of antelope -- they don’t really interact in complicated ways. But humans interact in highly complex ways, much of it aimed at coordinating with others cooperatively and communicatively.

For 99 percent of our evolutionary history humans lived in hunter-gatherer groups. Hunter-gatherer groups are highly cooperative. It’s sort of like one big family. They are all helping one another and sacrificing for one another all the time. And being able to get along in that special way enables us to put our heads together to create new things and to solve problems that we couldn’t solve on our own.

“When people tell me how uncooperative humans are, I say, ‘You have the wrong baseline. You should hang around chimpanzees sometime!’”
-- Michael Tomasello

“The fall,” as it were, was transitioning from hunter-gatherer life to agriculture and cities, where now there are lots of people living in one place. Individuals start monopolizing resources, you get power and capital, etc. So that’s the world we live in today, where some people dominate others, and there’s a lot of uncooperative behavior based on different power structures and conflicts between in-groups and out-groups.

When people are in a small group of people they know – family, friends, small communities – they’re incredibly cooperative compared to other apes.  When people tell me how uncooperative humans are, I say, “You have the wrong baseline. You should hang around chimpanzees sometime!”

Q: You talk a lot about the importance of the human sense of “we.” Are you hopeful that humans will be able to expand our sense of “we?’

TOMASELLO: Well, in a way. But the bad news is that one of the things that brings people together is having a common enemy, being under threat. All politicians know this, especially the more authoritarian ones. Maybe aliens from outer space will invade, and we’ll all come together against that!

But seriously, I do think education and exposure to people from different cultural backgrounds tends to make people see the world more broadly and appreciate the values of others. So institutions like Duke have an important role to play.

Q: Given that so much of what makes us human depends on social learning, do you think early education is too individualistic?

TOMASELLO: I do. One of the things I think is missing in the development and education of young children is they need more unsupervised peer interactions.

There are certain kinds of problem-solving where the key is to be able to see it from a different perspective. That’s where cooperating with peers, rather than being instructed by adults, is particularly effective.

And in the moral domain it’s absolutely essential that children sometimes interact among themselves without adult supervision to create their own moral compass. Morality is not following authoritative rules, but rather working things out cooperatively with others on an equal level.

Q: You have kids. How has your work affected your own child-rearing?

TOMASELLO: I have a young daughter. If my daughter has a friend over to play, I go to another room. And if they come to me to resolve something, I say “I don’t know, I wasn’t there. I didn’t see it. I don’t know what happened. You guys work it out.”

Three Juniors Selected as Faculty Scholars for Excellence in Research