What he does at Duke: DeFrantz rarely sits still when he’s on Duke’s campus.

He teaches courses such as “Black Dance,” “Black Performance Theory” and “Repertory: Dance Theater.” He’s also director of Duke’s “SLIPPAGE” lab, where he works with students on conceiving shows that highlight emerging technology in live performances.

DeFrantz conceived current productions like “CANE,” which explores memories of African-American sharecroppers through dance and digitally projecting cane fields, and “Theory-Orgaphy,” a multi-year project in which performers improvise with the audience.

“I’ve always been interested in dance, programming and video games,” DeFrantz said. “I’m lucky that I get to combine all of those in SLIPPAGE. I wanted to create a dance curriculum that is nimble and changeable based on 21st-century technologies.”

When he does finally give himself a chance to sit down, it’s usually to write. DeFrantz published his first book, “Dancing Revelations: Alvin Ailey's Embodiment of African American Culture,” in 2004. The book is about the Alvin Ailey American Dance Theater, a multi-racial company of dancers that began in the early 1960s.

“Dance and the arts are representing what it means to be a person on the planet,” he said. “If people are underrepresented in the arts, if they don’t see themselves on stage or in media, then that can be damaging.”

What he loves about Duke: As a professor in several departments, DeFrantz values Duke’s interdisciplinary approach to teaching and collaboration.

DeFrantz works with Martin Brooke, associate professor of electrical and computer engineering for the Pratt School of Engineering, to teach the course “Performance and Technology: Composition Works.” Students in the course create performance projects using robots, media and computer interface.

Two years ago, students used the theme of “flowers” to create a robot daisy that turned to people as they danced around it. 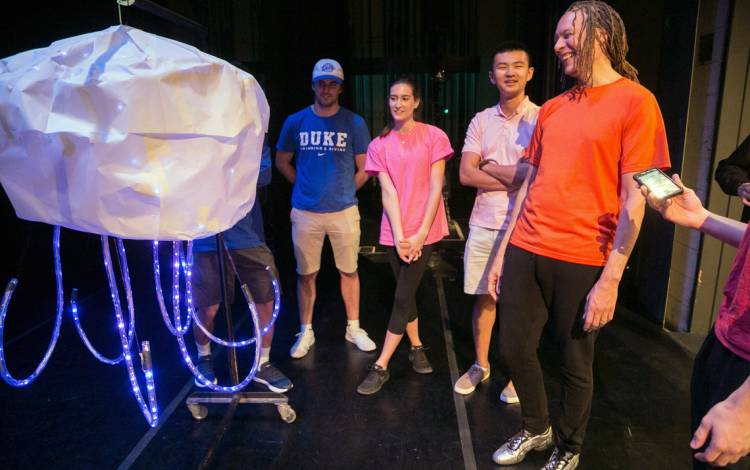 “Duke is pushing the arts to an interdisciplinary focus,” DeFrantz said. “I can work in engineering and humanities and arts. It’s very appealing to work in several directions at the same time.”

Memorable day at work: In 2015, DeFrantz worked with Thavolia Glymph, Duke professor in History, for the three-day symposium “Global Slaveries/Impossible Freedoms” to honor the legacy of John Hope Franklin, a former James B. Duke Professor of History.

Professors from across the country spoke at the symposium about slavery, capitalism and black political thought. DeFrantz performed a dance in front of shifting images and quotes from John Hope Franklin.

“I was dancing among his memories and statements,” DeFrantz said. “It was a chance for me to embed the arts into American history.”

Special object in his workspace: Tucked away in his corner office in the Rubenstein Arts Center is DeFrantz’s keyboard. He enjoys playing Frédéric Chopin, Duke Ellington and Diana Krall.

“Playing puts me in a relaxed headspace,” he said.

Best advice he’s received: “Put yourself in the path of the thing you want to do.”

DeFrantz doesn’t remember who told him this advice, but he followed it when he was a young artist in New York City.

“I wasn’t surrounding myself with dance even though I wanted to be a choreographer,” he said. “I remember making the decision to start attending performances and studios just to put myself in that environment.”

First ever job: DeFrantz woke up at 5 a.m. to deliver The Indianapolis Star when he was in middle school.

“My father had to help me get started because I had trouble waking up,” he said.

Something most people don’t know about him: DeFrantz and his husband, Bert, appeared on “Love It or List It” in 2018. The HGTV home design show centers around a family who must decide if they want to sell their home or stay in it after renovations.

DeFrantz and Bert often get recognized from the show.

“I was in the Atlanta airport and this woman came up to me and said, ‘I knew I would meet a celebrity here,’” DeFrantz said. “I didn’t want to disappoint her, but I’m definitely not a celebrity.”

Add to Your Professional Toolkit with Virtual Courses