Mike Abramowitz, president of Freedom House, and Sanford School Dean Judith Kelley shared a timely message in a Feb. 25 panel discussion: Democracy is “not a one-way street,” and democratic nations can fall back into authoritarianism.

Both Abramowitz and Kelley are experts in democracy and authoritarianism. They joined moderator Sanford School Professor Fritz Mayer to discuss international political trends that are challenging norms that sustain freedoms and civil society. 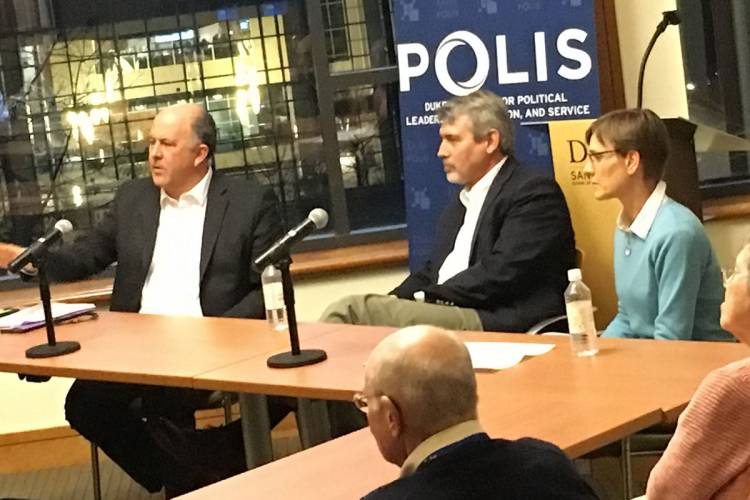 Kelley is an internationally known scholar of election monitoring, which over the past three decades has become one standard by which free elections are measured. “It has come to the point where it was almost a self-declaration of cheating if you didn’t invite monitors,” Kelley said. But now, she said, “autocrats have figured out how to have the trappings of elections.”

Kelley explained how advanced democracies are now doubting their validity. “As long as they can have the trappings of what the capitalist model produces the benefits of . . . then they’re more content to have a non-democratic form of government.”

Abramowitz said recent examples show that democracy is perhaps not as deeply rooted as we once thought. He noted that “many more democracies exist now” compared to the end of World War II, but cautioned that backsliding is indeed possible.

The two panelists also spoke about increased surveillance in China and the Internet’s role in authoritarianism. Abramowitz said China has built up a system of repression with a firewall, censoring information. The nation is designated as “not free” in a 2018 report.

Kelley noted that technology has also provided Chinese activists with opportunities to organize.  Before social media, activists in China had to coordinate in-person, post physical posters, and take other risks that the Internet has mitigated.

When asked what keeps them up at night, the panelists listed four main topics of concern. Abramowitz noted economic dislocations since the recent Great Recession and the openings they have created for populist leaders to exploit; the global migration crisis; the more aggressive role of China and Russia; and technology in the hands of dangerous actors.

Kelley added that the migrant crisis combined with economic pressure after the recession meant that jobs and goods were not being distributed fairly. Even when unemployment is low, the quality of those jobs is not necessarily equal. She said that this creates openings for divisive politics, easily exploited. She added that international organizations that were once seen as working for the people have grown to be perceived as more elitist.

Democracies, she said, have delivered goods and economic wellbeing to people in general, but inequality has driven discontent.

Abramowitz and Kelley answered questions from the audience on topics ranging from the United States’ score on Freedom House reports to the role of immigration policy. The event was sponsored by POLIS: Duke’s Center for Political Leadership, Innovation, and Service.  It was cosponsored by the Sanford School of Public Policy and the Ethics & Society Certificate at the Kenan Institute for Ethics.

A Phone Call Away for Answers and Help

While COVID-19 pushed them away from campus offices, on-call staff remain ready to lend aid from home