Mindy Guzman was so attached to the pre-printed form she used for her daily list of tasks that when the company quit producing them, she saved her last few sheets and has been making copies of them ever since.

“I’ll just punch holes in them and put them in a binder,” said Guzman, a program coordinator with Duke Surgery. “For my workday to be efficient, I have to keep a to-do list. I have to keep a check and balance of what I’ve done, what I’m still waiting to do and what I can cross off my list as completely done.”

Whether it’s a particular type of form or in pages of a notepad, a to-do list is the guiding document of a workday. And the best ones are more than just a simple list of tasks. When done well, to-do lists – whether analog or digital – can provide a roadmap for a productive day and moments of satisfaction when items get crossed off. But when done poorly, a to-do list can be an overwhelming mess.

To help you get the most out of your to-do lists, here are some dos and don’ts from Duke employees and experts.

Don’t just throw stuff on there

Birmingham, who covers to-do lists in her Managing Multiple Priorities course, said that while it’s important to put all tasks facing you in a day or week on your to-do list, there’s much more to it.

It’s crucial to go back and organize items on the list. Birmingham said that an important step is to group tasks by project and put the most pressing tasks at the top. She suggests using a number system or different color ink to denote which items must be completed that day and which items aren’t as urgent.

A to-do list can be as long or short as you’re comfortable with, but ensuring that tasks are organized by immediacy and topic is a major step toward making the list useful.

“It’s great to do one big brain dump, but it’s got to be categorized,” Birmingham said. “What’s the most important thing? What’s my game plan? You may have 100 to-dos on your list, but it doesn’t do any good if they’re not organized.”

While some items on the to-do list will be time-consuming, there will be tasks that only take a few moments to complete. A smart approach for quick tasks is to group them in a section of your list or as smaller set on the page. That way, when you have a few spare moments between larger tasks, you can knock some of the smaller things out.

“If I’m waiting for someone to call me back or composing an email that needs to wait five minutes to go out, I’ll look over at those little mundane things and do those,” Guzman said.

Check your list at the end of the day

Guzman, the program coordinator with Duke Surgery, begins her day by spending a few minutes organizing her to-do list.

But she also spends 15 minutes or so before she heads home at the end of a work day to craft a list for the next day. She said the second organizing session is key for aiding her work-life balance.

“It de-stresses me so much because I’m not lying in bed at night thinking that I forgot to do something,” Guzman said. “By taking those 15 minutes at the end of the day that I use to review what I did and organize tomorrow, I feel like I can leave work at work. I’m not taking it home with me.”

Do what works for you 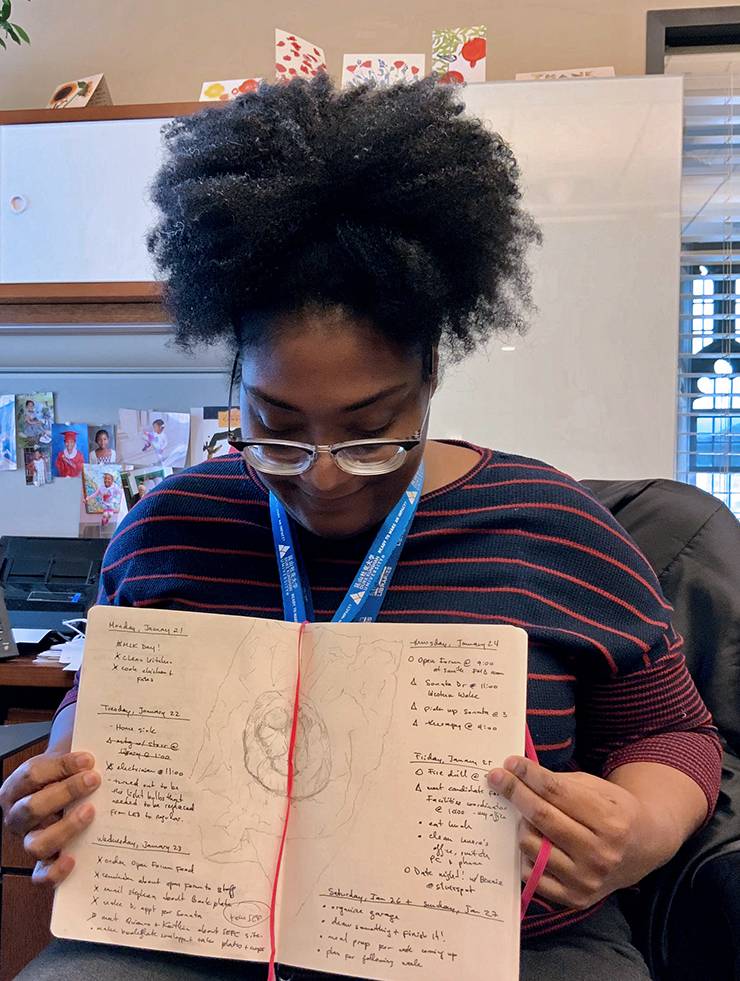 Katryna Robinson, executive assistant to the Duke University Librarian, may have some of Duke’s most ornate to-do lists. Robinson organizes her days using lists she keeps in a notebook.

The pages of the book are laced with her own intricate designs and drawings.

While it’s important to create complete and organized lists to direct your day, how you do it is ultimately a matter of personal preference.

Keeping lists on an online calendar, such as Microsoft Outlook, works for some. There are also plenty of useful list-making apps for smartphones. Some free apps, such as Google Tasks allows you to create bulleted lists with subtasks and custom deadlines, while Wunderlist allows you to share lists with other users, making collaboration easy.

Regardless of how you do it, if you, like Robinson, can find a way to make planning your day fun, that’s helpful, too.

“If you create something that’s interesting, you’re more likely to keep track of the list,” Robinson said. “You’re more likely to use it if it’s a pretty notebook, which sounds terrible and shallow, but it’s true. You’ll want to open it and add things.”

Pawan Dhingra will serve as Keohane Distinguished Visiting Professor for 2022-2023.