Research projects don’t always lead to the formation of national federations. One researcher’s project on poverty did, and he’s hoping it starts a movement.

For years, Anirudh Krishna, a professor in the Sanford School of Public Policy, has been studying how people escape poverty and how they come to be poor in the first place. Studying different countries around the world, he came across a startling similarity between different places and stories: people rarely escape lives of poverty, and when they do, they don’t get too far.

Krishna described the path to getting out of poverty as a vicious cycle of “broken ladders.”

“No one goes beyond occupations like the ones in the community. There are a number of things that create big obstacles to aspirations and achievement,” said Krishna. These “broken ladders” include low-quality education, neighborhoods filled with low-wage occupations and an absence of mentors.

In the end, “broken ladders” prevent upward mobility, making aspirations beyond the ones in the local community almost unfathomable. In his time interviewing children, Krishna found an interesting pattern in their responses to ‘What do you want to be when you grow up?’

“I found many kids who were smart, very smart,” said Krishna. Almost every child said wanted to be in a low-paying occupation, like a local teacher or police officer. “[These] are honorable and respectable occupations, but there weren’t any kids who wanted to be astronauts or scientists or movie stars or business executives.”

Their responses mirrored what they knew to be the highest position in their community.

“Kids growing up [in poverty] only see the occupations around them, so they don’t get to know about other alternatives,” he said. “And if they do learn about a different alternative – they don’t know how to get there.” 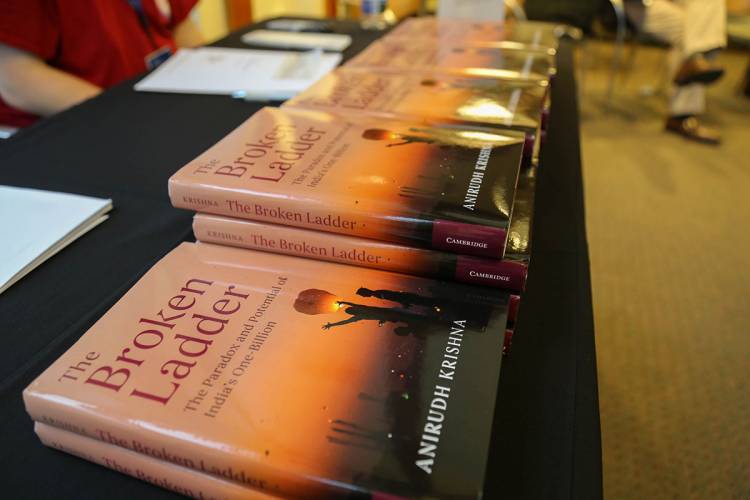 Krishna researched ways to propel children into alternative careers and, ultimately, upward mobility. Answering this question led to several searches for what he identified as social mobility promoting organizations (SMPOs). SMPOs differ from general nonprofits on health improvement or education skills training. Instead, SMPOs promote a combination of life skills, such as job preparation, confidence building and professional development, with a central goal of getting youth in careers they would otherwise not have.

His team identified several organizations in India that fit their SMPO definition. They visited their leadership, staff and participants to capture the magic of what made them successful.

“At the end of it all, I would look at them and say, ‘Hey there’s this other organization in another city which is doing something like you. Do you guys know each other?’ And they would say, ‘No, could you please introduce us?’’’ Krishna recalled.

Eventually, each enthusiastic introduction helped build the impetus for forming a formal federation between these SMPOs. Krishna estimates that alone these organizations are collectively helping no more than 100,000-150,000 children.

“For a country like India, that’s a drop in the ocean. You need be reaching out to millions of kids, and if [this federation] can work in India, then similar examples could be developed in other countries.”

With Krishna’s help, the group convened their first meeting July 2017 in Bangalore. Since then, Krishna has counseled the group while it established an interim governing council, created articles of association, and other foundational milestones. In its meeting December 2018, the group discussed the foundational documents and agreed to register themselves as a nonprofit corporation, the National Federation of Social Mobility Promoting Organizations of India.

Krishna is proud of his research and his volunteer time with the group. “I get nothing out of this except the fulfillment of a hope, a shared hope. These folks are doing things I only write about. My research is about them, and I’m just being the catalyst.”

He knows he will forever be moved by this experience. “I truly believe that every kid should have the same chance. I would really like to see this kind of movement happening everywhere.”

This story is part of a Duke Policy Bridge at Sanford series highlighting the policy engagement work led by faculty and researchers across campus. To learn more about this project and other work by Professor Anirudh Krishna, please visit his Sanford webpage.

To inquire about our engagement story series, please email patience.wall@duke.edu.

Allow extra travel time around campus due to move-in on Aug. 20 and a block party event on evening of Aug. 22