More than 300 national experts and advocates for redistricting and gerrymandering reform gathered at Duke’s Penn Pavilion Jan. 25-26 to move forward toward a bipartisan consensus on redistricting.

Hosted by POLIS: Duke University’s Center for Political Leadership, Innovation, and Service, the two-day Reason, Reform, & Redistricting Conference produced discussions on the latest developments and ideas in the national conversation about redistricting.  The Sanford School of Public Policy and Common Cause co-sponsored the event.

One highlight was remarks from Congressman David Price (D-NC).  He noted the conference’s backdrop of the federal government shutdown as a byproduct, in part, of redistricting and gerrymandering.  He lamented the effect of gerrymandering on the polarization of our politics.  “Far too many representatives in Congress today only have to be concerned with a challenge in their party’s primary,” he said. 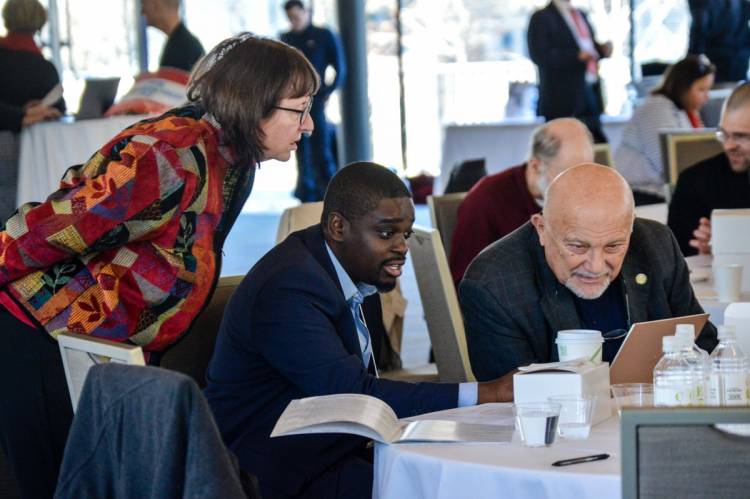 Ross noted in the conference’s opening session that “If democracy is something that we care about, then this is the issue of our time.”

He and others also hinted that windows of opportunity could be opening for redistricting reform, as evidenced by recent reform victories in places like Michigan, Utah, and Missouri. Many speakers explored North Carolina’s efforts to affect change through both the General Assembly and the courts.

The legal challenges to partisan gerrymandering were also a prominent topic of discussion. Counsel for Common Cause, representatives from the League of Women Voters, and a number of experts providing testimony in the ongoing cases spoke at length about constitutional challenges to the problematic role that politics plays in redistricting. Attendees were able to hear about different legal approaches as well as understand the data and research behind some of the arguments that will be presented before the Supreme Court later this year.

The conference concluded with a call to action from Fritz Mayer.  “There is nothing democratic about disenfranchisement,” Mayer said.  “We must continue to fight for political practices that celebrate the varied opinions of our citizenry, because those opinions cannot come to the fore when buried in gerrymandered districts that no longer heed their calls.”