Robin Kirk’s new novel “The Bond” imagines a futuristic world in which women rule and fantastical creatures roam. We asked Kirk, who co-directs the Duke Human Rights Center, what inspired her venture into young adult fiction.

Question: You’ve written a dystopian sci-fi novel for young adults. Can you tell us a little bit about your heroine Dinitra and the world she inhabits?

Reading for 'The Bond'

Robin Kirk reads from “The Bond” on Friday at noon in Bostock 127 as part of the Duke Game Lab open house.

Kirk: The world I constructed for the book is 180-degree flip from Margaret Atwood's “The Handmaid's Tale.” Women, not men, are in charge, and they've devised a way to manage reproduction through technology. Like Atwood, I'm using only real-world elements, such as in vitro fertilization, surrogacy and boarding schools, to imagine a world where the next generations are engineered to serve society.

Like her age-mates, Dinitra is genetically engineered but feels like an imposter. Something went awry in the lab, she’s convinced, since she never seems to get anything right in school. Plus she's an artist and sees the world through colors and images, which is considered frivolous by others. In many ways, she's like some Duke students I've taught or advised. Despite being groomed from birth to go to an elite institution and launch predictable careers, they can feel a deep sense of unease that they don't belong, that their admission was some kind of mistake or that their interests -- in the arts or service, for example -- are unworthy of all that's been invested in them. 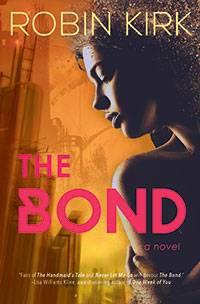 What was your favorite part about writing “The Bond”?

Kirk: I started by wanting to incorporate human rights themes into a page-turner -- and hope I succeeded! But I was surprised at how the story started to tell itself, that I discovered things about this world and its characters that I would not have predicted. One of the questions I explore in the book is whether or not women can be as violent as men (no spoilers as to an answer)! I also discovered that the book was about the many bonds we create during our lives, not just with family and friends, but with animals and the earth itself.

You’ve written in many genres -- travel, essays, opinion pieces, fiction. But at Duke you’re best known for your work as co-director of the Duke Human Rights Center. How does your interest in human rights inform this work of fiction?

Kirk: I got the idea for this book from my daughter. When she was in middle school, she read Markus Zusak's “The Book Thief” and could not stop raving about it. I became a fan, too. Zusak gives us a fresh and moving way to look at the Holocaust that is pitched to younger readers.

I wanted to explore the nature of genocide: that most genocides are justified as the "right" thing to do, something that benefits human society. The proponents of genocide -- in Nazi Germany, Rwanda, Cambodia, etc. -- always claim that the targeted group is a threat and must be dealt with. And even the most advanced, cultured, literate societies fall for this again and again.

Phillip Pullman has said that some "themes, some subjects, are too large for adult fiction; they can only be dealt with adequately in a children’s book." I agree. Young readers read a story and it sticks with them for the rest of their lives.

Are you a fan of the sci-fi genre and, if so, what are some of your favorites?

Kirk: I'm a huge fan of the broad category of "speculative fiction" -- sci-fi, fantasy, steam punk, space operas, you name it. First of all, these are riveting stories, meant to immerse and transport readers. Second, they can raise really interesting questions about who we are now and how we plan to live in the future.

I recently listened to Ray Bradbury's “The Martian Chronicles” again, partly because he's one of the writers who made me want to be a writer. It holds up extremely well because it's not really about science but about human nature, which is pretty consistent over time. Ann Leckie's “Ancillary Sword” is super-interesting not only because it imagines a future of sentient machines, but also because of her play with gender norms. One of the best reads I've had recently is Philip Reeve's “Mortal Engines,” where cities become mobile and eat other cities -- absolutely fabulous.

Will there be a sequel?

Kirk: Yes! The next book in the series is scheduled for later this year, with the final book in 2020. Once I'd finished a draft of “The Bond,” my son commented that I shouldn't stop the story there. I had no intention of writing more, but the comment stuck with me and I realized there was much more story to be told.