The Co-Lab Studio features tools such as 3-D printers and laser cutters, and allows Duke’s students, staff and faculty to follow their creativity.

And now, there’s another tool that brings a little more muscle to the lab’s array of machines in the lab on West Campus.

The lab, which is run by Duke’s Office of Information Technology (OIT), has added an Omax Protomax Water Jet Cutter. The machine uses a .008 inch wide, high-pressure stream of water mixed with sand-sized bits of garnet to cut through anything in front of it.

“Steel is kind of a brutal thing,” said Chip Bobbert, digital media and emerging technologies engineer for OIT. “If you were to try to cut it with any other thing in here, it doesn’t matter. It’s not even going to scar it. What makes the water jet special is that it doesn’t care.” 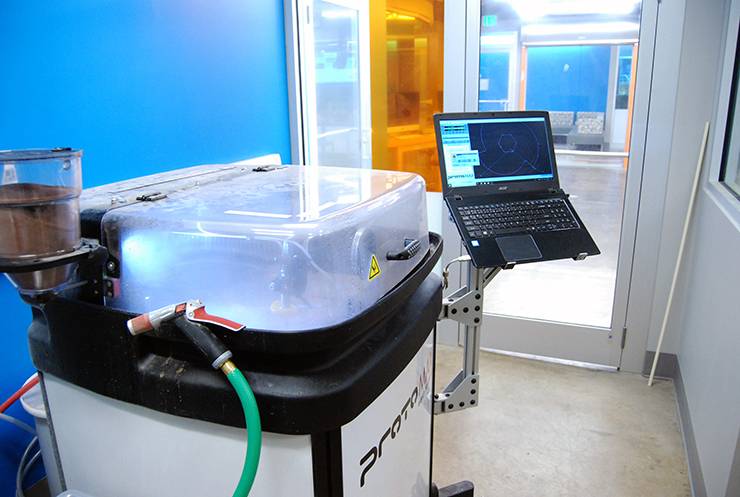 Previously, the Co-Lab featured cutting tools that worked on wood and plastic. But having a cutting tool that can cut designs out of metal opens up possibilities of creating more powerful machines. The water jet cutter is capable of cleanly cutting through glass, metal and ceramic pieces up to an inch thick.

The machine itself is about the size of a large washing machine and features a clear, plastic lid that can be raised and lowered. Underneath the lid is a basin of water and a small nozzle that shoots the powerful stream.

After it cuts through the material it’s working on, the metal and garnet is filtered out of the water before its drained.

While the cutter is powerful, it’s also precise. It’s guided by a computer-aided design system, so whatever users can dream up, the machine can cut.

“This is a very efficient way to do what you want to do,” said Martin Brooke, associate professor of Electrical and Computer Engineering, who has students who have used the cutter. “It’s a nice gap-filler between 3-D printing and full-blown millwork.”

The machine won’t be available for the wider Duke community to use until the spring. That’s because, for now, the staff of the Co-Lab is busy getting to know the cutter’s quirks and capabilities.

“Whenever we get a new tool, there’s a process of us learning it and getting familiar,” Bobbert said. “It’s a relatively new technology, so we have to learn how to deal with it and how to train people to use it.”

As part of that effort, the Co-Lab staff is using the water jet cutter to build a steel shredder that will destroy instead of create.

At some point soon, the unclaimed or imperfect 3-D printed plastic objects that litter parts of the Co-Lab will meet their demise between the 36 gnashing stainless-steel teeth of the shredder. The shredder’s mouth is roughly the size of a shoebox and powered by a motor salvaged from a trashed drill press.

By creating and constructing it, the student staff of the Co-Lab will test their proficiency on the water jet cutter so they can guide the innovators that follow, and crush some leftover plastic along the way.

“It’s a fun project, but it also has some intellectual functionality behind it,” Bobbert said.

The Fixers of Anything at Duke