“The War to End All Wars” itself never really ended.

World War I lives on today in the conflicts disrupting the Middle East and Europe, the experiments still seen in art and literature and even America’s place in the world order. A little more than a decade into a century that started with optimism that large social and economic problems could be resolved, the war definitively shattered those dreams.

November 11 marks the 100th anniversary of the armistice that ended the fighting, and at Duke, the Great War and the decisions made in its aftermath are still the subject of research and teaching. There were five European empires at the start of the war - in Turkey, England, Germany, Russia and Austria-Hungary; at war’s end, only King George of Great Britain retained the throne. The war called into question principles of history, economics and political science and prompted scholars to re-think fundamental concepts in their disciplines.

The revolutions went far beyond politics to nearly every corner of Western culture. The immediate decade following the war saw classical traditions challenged in art, literature, theater, music and even physics. Those new ideas, some developed in response to the horrors of the war, continue to carry a profound influence on contemporary thinking.

Below, three Duke faculty in different disciplines discuss their scholarship and teaching on World War I and how its footprints lead to the major political, social and cultural issues now facing us.

For more than 140 years, the United States had focused its foreign interests within its own hemisphere, so when World War I thrust the country into a leadership position on the world stage, it was a significant change and somewhat unexpected.  It was also extremely brief – lasting just till the end of the Wilson Administration in 1921, but the lessons learned from the experience would shape the country’s rise as a world power two decades later.

Political scientist Peter Feaver teaches the conflict as “a harbinger of what would become the US role in international affairs.”

“The US starts the war in its traditional ‘Washington Farewell Address’ mode, worried about entangling alliances,” said Feaver, who led a class “staff ride” to WWI battlefields in March 2018 (see video below). “President Woodrow Wilson is re-elected on a platform of keeping the US out of the war.  All of this was keeping with the previous century of US foreign relations.”

But the way the strategic logic of the war played itself out meant that the US would side with the Allies – Britain, France and Russia. A strong tradition of staying neutral in the many European wars could not withstand forces unleashed by WWI. Feaver said Germany was pushed into a confrontational stance with the US, sunk American ships and activated the “American bellicose spirit.”

To understand the trauma that made the Great War such a seminal event, start with the top headline from the Sunday Times, July 2, 1916. The day, in fact, did not go well for England. It was the opening of the Battle of the Somme. In one day, the British forces took on nearly 60,000 casualties, 20,000 of them dead. For comparison, in this one day, the British suffered 11 times more casualties than the entire Allied forces suffered on D-Day.

Its entrance into the war tipped the outcome to the Allies.  By the war’s end, all of the European countries were exhausted, but the US stood relatively unscathed. Wilson traveled to Versailles ready to reshape the post-war world and exert American leadership.

Then the effort all came to a halt.

“This could have been the start of the American Century, but it was aborted by Wilson’s stroke and health issues, the harsh peace and the idealistic utopian vision of the League of Nations, which raised the suspicions of US conservatives,” Feaver said. “In the hearts and minds battle that followed, a return to normalcy won.”

But the moment on the world stage wasn’t forgotten by key American leaders. Two decades later, as the US entered World War II, President Franklin Delano Roosevelt guided the country with the failures of the earlier war in mind.

“FDR wasn’t going to make the same mistake,” Feaver said. “And, this time, we came out of the war as a leader in international relations.”

For Feaver, the war had one other important implication: It gave rise to his own field of international relations.

“World War I was the pivotal moment in international relations,” he said. “The war was a prime example of a war nobody wants but happens anyhow because everyone wants a different kind of war than what they got. It was filled with gross miscalculations. The field of international relations was created in the war’s wake to ensure it didn’t happen again.”

When 200,000 black soldiers went to Europe with the American Expeditionary Forces to fight for democracy in World War I, they left behind a country where Jim Crow restricted their own rights at every turn. Historian Adriane Lentz-Smith said the war made that contradiction conspicuous. The soldiers came back changed by their experiences abroad, and the war became a seminal moment in American civil rights history.

“The war played a key role in the evolution of the idea of freedom for African Americans,” said Lentz-Smith, author of the 2011 book “Freedom Struggles: African Americans and World War I.”  For many black soldiers, the war was their first interaction with a wider, more cosmopolitan world, where they saw people of different countries and races mixing with greater freedom.  It changed their consciousness, Lentz-Smith said. Sgt. Christopher Columbus Watts put it directly: “I now have the world’s experience.” 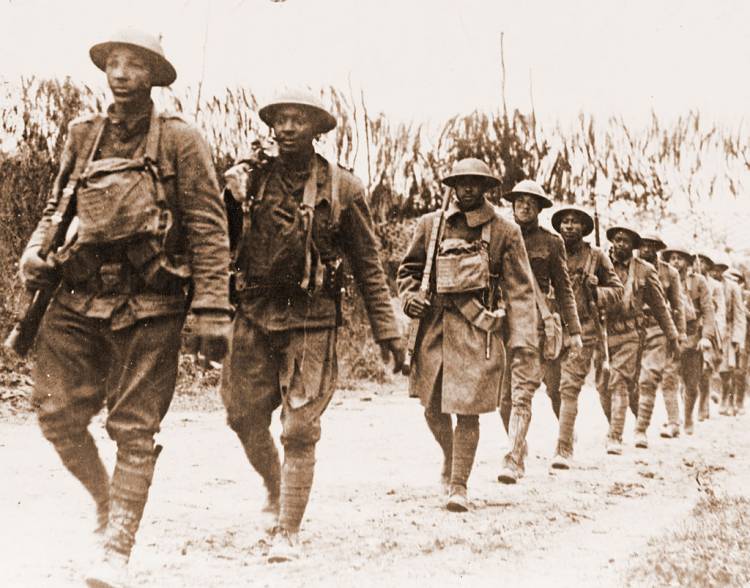 The US military and Jim Crow’s political patrons back home were worried by this. President Woodrow Wilson, Southern politicians, and the US military ensured “that Jim Crow was shipped out with the army,” Lentz-Smith said.  Those efforts were resisted by many of the soldiers, to the point of several acts of rebellion in French ports. The soldiers fought their “own war for democracy,” she added. “The question for them was how can they make the world safe for democracy when democracy didn’t work for them?”

This led to activism on two fronts: In Europe, the soldiers made personal efforts to demand dignity from the US army, and at home, African American leaders such as WEB Dubois organized a new wave of national campaigns and claimed rights with a clarity that the soldiers couldn’t express. “The soldiers saw themselves as central to the American experience,” Lentz-Smith said.  “While the reformers used the African-American troops to press on white supremacy.”

The contradictions were even more apparent at the end of the war with Wilson’s efforts to build a post-war international order based on freedom and democracy. Activists saw Wilson’s vision “as being stunted by white supremacy,” she said. African-American journalist Ida B. Wells and numerous others attempted to go to the Versailles talks to make their claims for African-American rights, only to have the US government deny them visas to leave the country.

Many soldiers returned expecting equal rights, only to find resistance, Lentz-Smith said. The immediate post-war years were marked by violent race riots where white mobs took to the streets to attack African Americans and destroy their property.

“1919 was a year of gruesome lynchings and race riots,” Lentz-Smith said. “There were more than 10 major riots and at least 100 lynchings after the war – 11 of them were black soldiers in their uniforms.”

Some soldiers returned to Europe or joined the Great Migration of African-Americans out of the US South. Lentz-Smith said the experience gave them a feeling of manhood and dignity that they were not going to give up easily. The post-war period was a crucible where many of the civil rights activists that shaped the movement for the next 50 years got their start, Lentz-Smith said.

“They had seen a new world of possibilities beyond the conflicts of US Jim Crow,” she said. “The war had tested the soldiers’ mettle in wars for democracy both foreign and domestic. They knew, too, that this wasn’t an easy fight going forward.” 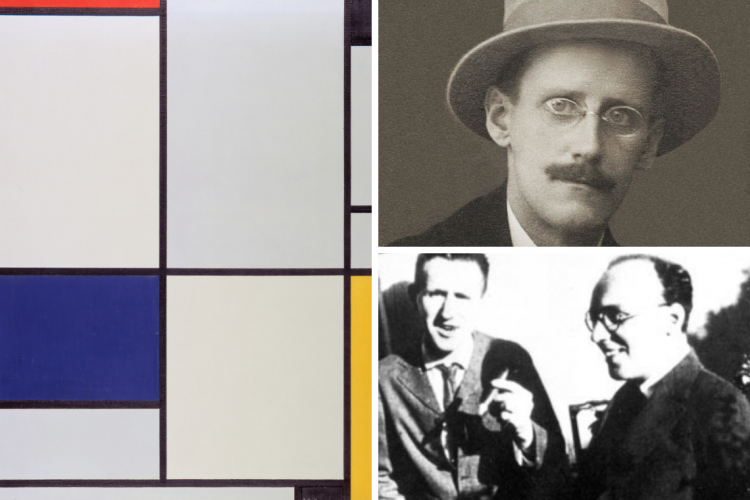 ART AND THE WAR: Out of the trauma and disillusionment, the post-war period was one of extraordinary creativity, often done with surprising humor. No longer restricted to representing reality, artists explored new approaches. Mondrian turned Dutch windmills into abstract art of mathematical precision. Surrealists dissembled reality and questioned the nature of reason. Cubists extended their experimentation. In literature, James Joyce (top), Marcel Proust and many others played with language and time. Dadaists cut up poems and rearranged the words to make new poems. In music, jazz swept the US and Europe while in classical music Arnold Schoenberg revised the standard tonal scale. On stage, playwrights and composers Bertolt Brecht and Kurt Weill (bottom) were among those who challenged the requirements of traditional theater.

The contemporary Middle East ranks as one of the world’s greatest hot spots, with brutal conflicts stretching from Yemen to Syria and the region being the site of the greatest refugee crisis in half a century.

Professor Erdağ Göknar, director of the Middle East Studies Center, says a number of these issues as started with World War I and the collapse of the Ottoman Empire.

“World War I established the modern Middle East as we know it,” Göknar said. “The individual histories in each of these countries are tied to it.”

In particular, he points to three main themes coming together at the end of the war: The collapse of the Ottoman Empire, which ruled over most of the region before the war; the extension of the colonial rule of the European powers to the region, based on the strategies those powers developed in Africa; and the rise of nationalism and self-determination among the region’s many different populations. 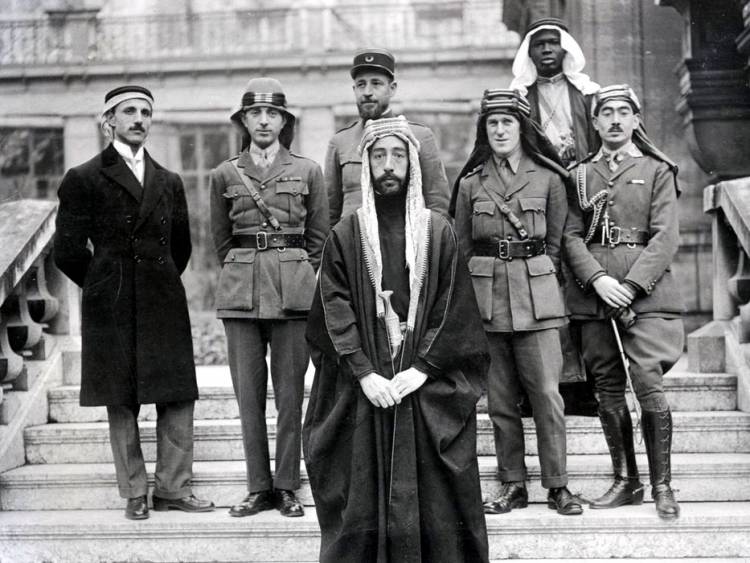 Emir Faisal's delegation at Versailles, during the Paris Peace Conference of 1919. The son of the Grand Sharif of Mecca, Faisal was made king of Iraq after the war with British support. Few people in Iraq knew who he was. Via Wikimedia Commons.

The European powers drew the boundaries of the new countries that came out of the end of the Ottoman Empire, boundaries that had little historical, political, ethnic or religious basis, which along with a continued desire for self-determination creates an ongoing source of tension that stokes contemporary conflicts.  To maintain control, the European powers set up or sanctioned kingdoms, mandates and representative governments.

Historically, an urban network including Cairo, Damascus and Istanbul was known for vibrant cultural exchange. In the aftermath of World War I, however, civil life was carefully managed by nationalized governments. And when the European powers lost control in a period of decolonization, new governments inhabited existing structures of semi-colonial rule.

“There were some attempts at representative democratic institutions, but these functioned differently when transplanted to the Middle East.  Nationalist governments still had to contend with a colonial-imperial legacy,” Göknar said. “All of the states had European fingerprints. This historical legacy contributes to regional conflict even today. There’s no easy way out.”

Göknar said this colonial-national legacy in the Middle East has been a factor since WWI, most notably with the formation of Israel and even more recently with the US serving as a quasi-mandate power in Afghanistan and Iraq.

There could have been other historical paths, he said. “Perhaps if the states had been accountable to a regional or federal union, we might have avoided some of these ethnic and border conflicts. But the war skewed political formations, and, geopolitically, I think the region will continue to be in conflict for some time.” 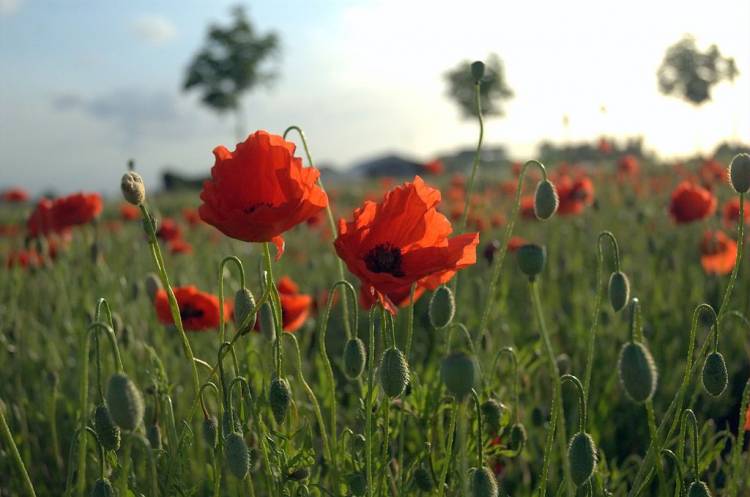