An “African Miracle” is possible, former Kenyan Prime Minister Raila Odinga told a Duke audience during a two day visit to the campus last month. The optimism comes, Odinga said, from economic growth from within the continent.

“Sustained high economic growth in the continent will be driven by African unity and political and economic integration,” Odinga said. 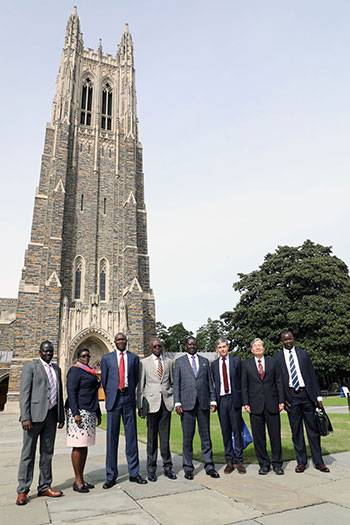 Odinga visit was sponsored by the Duke University Center for International and Global Studies (DUCIGS) on Oct. 23-24. Odinga served as Prime Minister of Kenya from 2008-2013 and was recently appointed as the African Union High Representative for Infrastructure Development.

His talk, “Africa: A Time for Sustained Optimism?” centered on his vision for the future of Africa. Odinga maintained that while the global economic environment may not be as favorable as it used to be, African development can be propelled by the growth inside the continent. In his view,intra-African growth, including expanding intra-continental air travel, infrastructure, and trade, will promote sustainable economic development across Africa.

He also stressed the importance of making further progress in providing  education and opportunities for Africa’s growing youth population.

“In the coming decades, Africa’s population will double to some two billion people, and many will be under 18,” Odinga said. “This could bring tremendous opportunities for economic growth. These young Africans could harness new technologies and ignite a new dynamic for growth, but only if they are well-educated, trained and healthy.”

He acknowledged that challenges remain that the continent faces on its path toward economic growth and stability, including corruption, insufficient infrastructure, poor nutrition, and ethnic-driven politics. However, Odinga spoke of how such challenges could be overcome. He added that growth in Africa would “propel the world into a better and more prosperous and secure 21stcentury.”

Indermit Gill, director of the Duke Center for International Development (DCID), served as discussant, providing context and statistics comparing the successful economic development in developing Asian countries to the greater struggles in Sub-Saharan African countries. Gill also discussed Kenya’s current economic overview, explaining that while the country’s economic growth has been good in recent years, poverty is still a problem because of the Kenyan government prioritizing other areas of spending.

Gill acknowledged that while there is much work to do on the continent to achieve sustained economic growth, “people like Prime Minister Odinga are in the business of miracles.”

In addition to his talk, Odinga visited with the Duke Global Health Institute and heard about some of the work faculty and students are conducting in Kenya. Some of the presentations covered mental health care of orphans and others in western Kenya, building cardiology capacity at the Moi Teaching and Referral Hospital, the intersection of HIV and cardiovascular disease in Western Kenya, reproductive health in Kisumu, and machine learning to encourage increased use of family planning strategies in Western Kenya.

He also met with a group of faculty from the Nicholas School of Environment and DCID. Professor Jeff Vincent led a session on the challenges of restoring forest and increasing carbon capture while supporting the people whose livelihood depend on the forest. The Kenyan delegation also met with the Duke Energy Access faculty to brainstorm about how best the government can facilitate access to energy in remote, rural locations.

During the visit, Odinga also visited Kathryn Whetten’s “Global Health Ethics: Policy Choice as Value Conflict” class at the Sanford School of Public Policy, and met with students for a lunch meeting, co-hosted by DUCIGS and the Africa Initiative.

Duke Helps Dancer Get Back Her Dancing Shoes