When the simple question – Do you plan to vote? – resulted in an F-bomb hurled his way, Gunther Peck took the high road. He inquired why the person was so angry. “I want you to vote,” he told the hurler.

“Then we had a great conversation,” Peck recalls, “and I loved it.”

If only it were that easy.

Peck, a professor and expert on immigration history at the Sanford School of Public Policy, shared his assessment of Tuesday’s midterm elections along with three Duke colleagues.

“Was it a victory for one side or the other? I think really depends on your perspective,” said Mayer, director of POLIS: Duke's Center for Political Leadership, Innovation, and Service, which hosted the event. 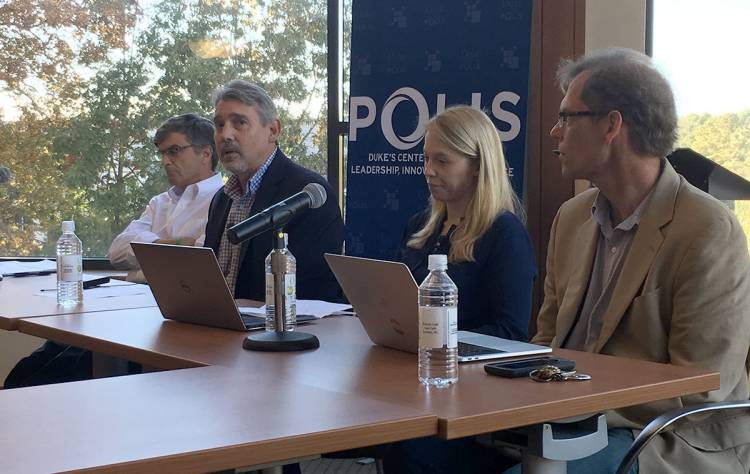 Jardina, whose research centers around white voter behavior, noted that a record number of 277 women were on ballots across the country (more than 100 won), including two Muslim women and two Native American women elected to Congress. Tennessee also elected its first female senator.

“Clearly, women were mobilized,” she said, citing the #MeToo movement and alienation from Trump’s rhetoric about race and ethnicity. “Women seem to be more sympathetic to race,” Jardina said.

Peck echoed that view, saying the negative talk about immigrants motivated people to vote. “It’s not unprecedented, but this was the most nativist, demonizing of immigrants I’ve seen in my lifetime. It drove a lot of people to polls,” Peck said.

Attacking immigrants in a political campaign may result in short-term gains for Republicans but also long-term losses, he added. “It’s not a sustainable path to an electoral majority,” Peck said.

He recalled California voters’ approval of Proposition 187 in 1994, which prohibited public services for undocumented immigrants. He said the initiative, which was later blocked by federal courts and never implemented, motivated activists and helped turn California into the “blue” state it is today.

Panelists also agreed that Tuesday’s results likely will not add balm to the nation’s bitter divide.

With the House now controlled by the Democrats holding subpoena power, President Trump faces a far-less friendly chamber than he did under Republican rule.

Panelists bemoaned the negative effects of gerrymandering, which gave Republicans a large advantage in several House races, especially in North Carolina. Republicans are likely to maintain their 10-3 lead in the state delegation, despite Democrats winning more than half the congressional votes. Such electoral distortions can undermine voter confidence in democracy, Peck said.

At the state level, McCorkle said Democratic gains in the General Assembly, which ended Republican’s veto-proof supermajority, will give Democratic Gov. Roy Cooper a lot more power when battling a GOP-controlled legislature. Cooper will now be a bigger player in the budget process, but that also means “he can’t just keep vetoing the budget,” McCorkle said.

“Democrats need to think about those most depressed areas of the state; so many of them are strongly in the Republican column.”
-- Pope “Mac” McCorkle

McCorkle said the election solidified the nation’s urban-rural divide. Trump – and the GOP’s – support in rural America will continue unless Democrats learn to do a better job of understanding why there’s so much anger in these communities, panelists said. They see Democrats as the educated elite who can’t relate to their struggles in hard-hit, blue-collar communities, McCorkle said.

McCorkle, a veteran Democratic consultant, said his party needs to do some “soul searching.”

“We’re becoming the college-educated party … it is sad if you are a committed Democrat,” he said. “Democrats need to think about those most depressed areas of the state; so many of them are strongly in the Republican column.”

Peck noted that former President Obama set up field offices in 90 of North Carolina’s 100 counties when he campaigned. Hillary Clinton, who lost to Trump in 2016, only had 27. That resulted in once blue counties like Granville flipping to Trump, he said.

“For my take, the Democrats have been pretty tone-deaf in terms of listening and speaking,” said Mayer, a former policy adviser to Democratic Sen. Bill Bradley.

Community organizing is crucial for promoting bipartisanship and restoring a consensus in American politics, Peck said.

“The biggest challenge to me is trying to get people to engage,” he said, adding: “We share a democracy project together.”

At age 62, staff member Mark Walters will run the marathon on April 18