What do typewriters, the Peace Corps, and former US Senator Jay Rockefeller have in common? Each played a key role in Tamera Luzzatto’s political evolution. The senior vice president of The Pew Charitable Trusts and former chief of staff to Hillary Clinton shared her political journey this past Monday in a conversation hosted by POLIS: Duke’s Center for Political Leadership Innovation and Service.

Growing up in the 1960s, Luzzatto was shaped by a climate of groundbreaking political and social movements. In the seventh grade, she demanded that her school permit her class to participate in a Vietnam War protest. Though she lost that battle, her class received typewriters to send letters to their congressional delegation, and she began a long career in political service.

As an undergraduate student at Harvard, she was involved with the Harvard Institute of Politics and served as the first woman president of the Harvard Democrats Club. “I realized when I was in college that I had been very caught up in policy issues," Luzzatto said. Through her college experience, she found the importance of being politically active and finding others who shared her values and policy positions.

Her career began at ACTION, a small federal agency which housed the Peace Corps and VISTA. She described her experience as "the most wonderful start for a 22-year-old to really be working with true leaders in progressive policies and progressive politics." 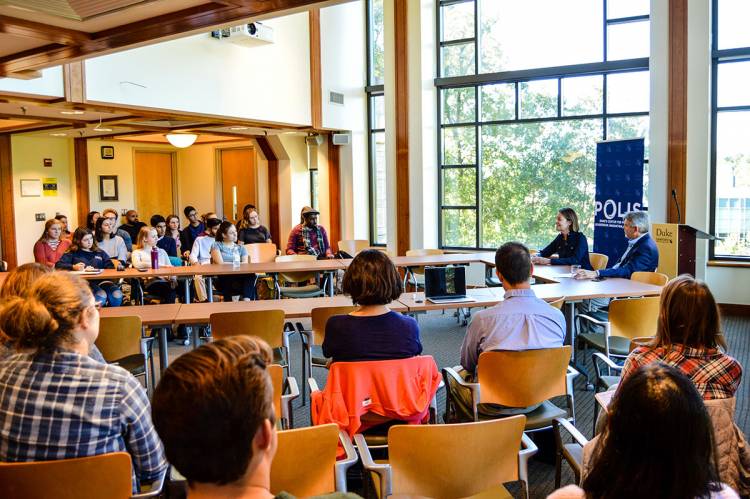 After working on Walter Mondale’s and Michael Dukakis’s presidential campaigns, Luzzatto turned to domestic policy. Senator Jay Rockefeller hired her as his legislative assistant, and she eventually worked her way up to chief of staff, where she met John Podesta, then-President Bill Clinton's chief of staff. When Hillary Clinton was elected to the Senate, Podesta referred Luzzatto to the then-freshman senator.

"I promised her three months when I met her four days after she was elected, and eight years and four months later, I shut her office down," Luzzatto recalled. "We just stuck. I had a ball."

Her most fundamental challenge was to break down Clinton’s image as a celebrity, presenting her instead as a “work horse, not a show horse.” She said, "Hillary Clinton had the north star of wanting to serve the public since she was in college or probably as a teenager."

To collaborate across the aisle on key legislative projects, Luzzatto would encourage Clinton to find common ground with her fellow senators.

This political common ground has become rarer and rarer over the years, Luzzatto said. “There are very few moderates left in both parties,” she added. “They've been chased out by the extremes."

To mend this political divide, she would like to see non-partisan redistricting and campaign finance reform.

Luzzatto also lamented the constant media coverage of Congress that has evolved since the creation of C-SPAN. With media attention on all political issues, she said, it has become more difficult to have true debates on the floor.

"We don't realize how demanding we are, what our appetites are, how judgmental the cable shows have caused us to be. There's a dark side to transparency."

Through her role leading government relations at The Pew Charitable Trusts, Luzzatto has worked to promote bipartisan collaboration in Congress, included creating bipartisan chief-of-staff initiatives in the House of Representatives and the Senate.

"Really knowing one another personally is the basis for trust, being comfortable with compromise, and finding some middle ground," she said. She criticized the “purity tests” that she has seen in political representatives, which hinder their ability to make real, incremental change.

The increased presence of women in political office gives Luzzatto hope in fostering more bipartisan collaboration. “Women in elected office are more open to compromising and working together across the aisle,” she said, while characterizing the numerous women running for political office this election cycle as a “wildfire” spreading across the country, and perhaps changing our political landscape as we know it.

The event was co-sponsored by American Grand Strategy, the Duke Career Center, the Penny Pilgram George Women’s Leadership Initiative, and the Women’s Center.