Major news of the summer began with a wedding and ended it with a funeral, with global summits and failed immigration policies in between, speakers said during a roundtable discussion.

The event last week, “What Happened?! Unpacking the Summer’s Major News,” aimed to make sense of recent national and international news that has shaped the political world.

The Duke Office of Civic Engagement and Duke’s Center for Political Leadership, Innovation, and Service (POLIS) sponsored the discussion.

Each faculty member possessed expertise in one or more of the topics discussed, giving students and other attendees a clear picture of the political and policy ramifications of recent U.S. actions at home and abroad.

“We’re headed toward an extraordinary constitutional crisis,” Mayer said. “The challenge right now is that most Republicans fear the president. If more stop fearing him, the landscape will change dramatically.”
-- Fritz Mayer

Shanahan spoke at length about how the Trump administration’s family separation policy -- which came to a head in July after a federal judge ordered the reunification of children with their detained parents --reflected a dramatic shift in longstanding U.S. asylum policy.

“Overwhelmingly people coming from Central America are fleeing civil or gender violence,” she said.  “If you can call anyone crossing the border a ‘migrant,’ you can arrest them.  It makes it more difficult for refugees to seek asylum in our country.”

She also highlighted the muted international response to the U.S.’s family separation policy, positing that our country’s withdrawal from various international norms, conventions, etc. has made other countries more apprehensive about urging action from the U.S.

Haynie added that there’s a racial component to this separation policy that is “not disconnected from the presidential campaign Donald Trump ran.”

He also talked through how America’s demographic shifts have made it more difficult for Republicans to win nationwide and even many statewide elections, and how Republicans have pushed through voter ID laws and gerrymandered districts to compensate for their growing demographic disadvantages.

“If you can’t outnumber the other side,” he said, “then limit the influence of their numbers.”

One thread that ties them together, Simon said, “is the troubling pattern of the president finding it easier to achieve common ground with authoritarian foes than with democratically elected friends.”

On Russia, Simon added, “Improved relationships require shared interests and mutual benefits.  These are not apparent in Trump’s repairing of the U.S.-Russia relationship.”

Mayer also expounded on what might happen if Democrats regain control of the House of Representatives, as the party would then have an apparatus for investigating the president -- the kind of oversight of this administration that has yet to be seen.

“We’re headed toward an extraordinary constitutional crisis,” Mayer said.  “The challenge right now is that most Republicans fear the president.  If more stop fearing him, the landscape will change dramatically.” 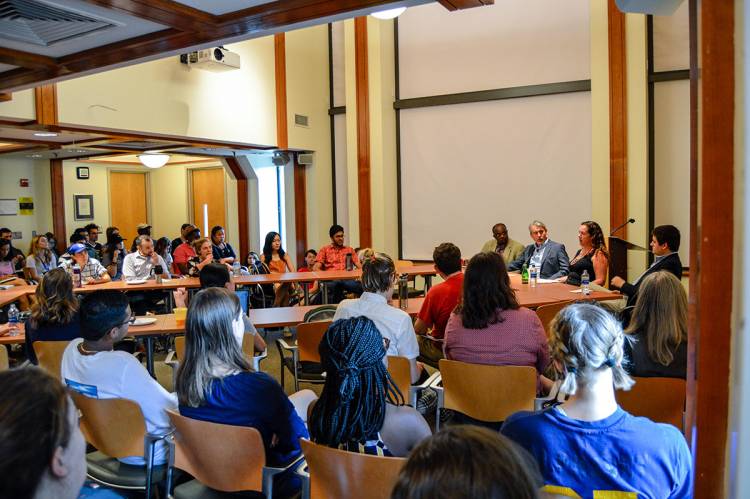 Additionally, the panel fielded numerous questions from students in the audience, including on North Carolina gerrymandering, the United States’ withdrawal from the Iran nuclear deal, America’s policy in Yemen, Alexandria Ocasio-Cortez’s upset primary victory over Rep. Joe Crowley in New York, and whether, in the words of Trump attorney Rudy Giuliani, we have reached a point where “truth isn’t truth.”

“This event was inspired by an Elon University commitment to gathering students at the start of the semester to talk about a variety of issues of importance that transpired during the summer,” said Leslie Parkins, associate director of the Office of Civic Engagement, who introduced the “What’s Happening” concept to Duke’s campus after visiting Elon over the summer.

“We hope Duke students will continue to find connections and ways to talk about difficult issues,” she said, “and to seek to understand and to engage in the change they want to see in the world.”

Dr. Kafui Dzirasa on how excellence is a form of protest