Duke’s third and newest group of David M. Rubenstein Scholars headed home this past weekend more confident about starting college than when they arrived six weeks ago.

The 51 incoming first-year, first-generation merit scholars from low-income backgrounds are selected for their outstanding achievements, resilience and commitment to social engagement. They lived on campus, learned about Duke resources and took a one credit course focusing on research, writing, coding and statistics. 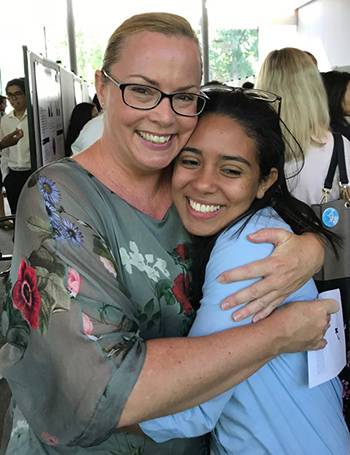 “This has been a summer full of love and hard work,” said Justin Clapp, director of the Rubenstein Scholars Program, to more than 100 attendees at a research poster presentation event in Penn Pavilion on Friday.

Denise Comer, an associate professor of the practice in the Thompson Writing Program, and Ben Cooke, an assistant director in the Academic Resource Center and instructor in the math department, created the class. For the final project, student teams picked their own research topics, which ranged from predicting basketball team performance to top 40 music trends to analyzing the effect of parental wealth and race on the status of offspring.One team decided to apply statistics to a mental health issue. They studied how social media helped perpetuate a specific form of suicide in Asia. Burning charcoal in a pan in an enclosed room puts people to sleep and ultimately can kill them, said Yodit Gethahun. The team tracked increases in the phenomena that started among young people in Hong Kong and spread across Taiwan and Japan via discussions on Facebook.

Despite the serious nature of the topic, the team said they enjoyed and appreciated the pre-orientation. Making friends with other students from similar backgrounds, learning their way around campus and connecting with staff and faculty boosted their confidence.  “At first, I was scared to be here,” said Lauryn Hill, who graduated from a KIPP public charter high school in Houston. “After meeting all my resource people, I’m not as intimidated.”

A new faculty spotlight series was added for the students this summer by Minna Ng, the program’s faculty director who organized the poster event and launched the Rubenstein program with Clapp two years ago. The series consisted of eight Duke professors from diverse academic backgrounds who shared advice – and how they dealt with failure.

“There were some common themes,” said Ng, an assistant professor of the practice in psychology and neuroscience – and a first-generation college graduate herself. “You will meet with rejection and experience failure. You pick up and keep on going because you love what you do. Gary Bennett (vice provost for undergraduate education) also said how important it is to surround yourself with good people and create a network of people who support you.”

Team member Jannina Martinez, who like Hill is from a KIPP school in Houston, is putting that advice into practice. On Friday, Martinez happily greeted Amanda Soydan, an assistant director of the Academic Resource Center, who came to the poster event.

“(Soydan) told me I was away from my mom and I could think of her as a mom away from home,” Martinez said. “I needed that. There are lots of opportunities and I’m not sure which direction to go in, but now I know it will be good.”