If the board game "Operation" had a 3-D action figure, this might be it.

It was an ivory model of a pregnant woman, small enough to fit someone’s outstretched hands, complete with movable arms and a hollow torso holding tiny hand-carved organs.

On a recent spring morning, Duke Libraries’ Rachel Ingold and Erin Hammeke prepared the 300-plus-year-old sculpture for an X-ray scan.

The curator-conservator team removed the detachable breastplate that held the figurine’s innards in place. With gloved hands and tweezers they extracted a tiny pair of cream-colored lungs, followed by a heart, intestines, bladder, kidneys, stomach, liver and pancreas, each barely the size of a pinky fingernail. Finally an unborn baby appeared, curled up in a ball, connected to its mother’s womb by an umbilical cord made of thread.

The figurine, or “ivory anatomical manikin” as they are called, is one of 22 at Duke and 180 known worldwide.

Now, Duke’s collection of ivory anatomical manikins -- the largest in North America -- is being digitized for the first time.

The origins of the ivory figures remain muddled. None of them are signed or dated. “Libraries and museums that have them aren’t quite sure how to catalogue them because we can’t date them precisely,” said Ingold, curator of Duke’s History of Medicine Collections.

There are a few male figures but most are of pregnant women. Some stand on a pedestal, others recline, eyes closed, on intricately carved wooden beds covered in velvet or brocade, or adorn box lids in bas-relief.

“There’s so much that we don’t know,” Ingold said. “Who created them, where and why?”

Now, using a technique called micro-computed tomography, or "micro-CT,” which is similar to the CT scans used in hospitals, Duke’s artifact and imaging experts are making three-dimensional X-ray scans of the manikins. The idea is to make these rare and fragile artifacts easier for people to see and study “without any risk to the originals,” Ingold said.

Huddled over the manikin in a brightly lit room in Duke’s Shared Materials Instrumentation Facility, Ingold and Hammeke tucked each minuscule organ into crumpled tissue or bubble wrap -- lightweight material that doesn’t block X-rays -- and wrapped the movable arms with padding to hold them in place during the scan.

They propped the manikin upright in a padded box and positioned it inside the nearly five-ton scanner. There, the manikin slowly rotated on a platform while the scanner took thousands of X-ray images from different angles. 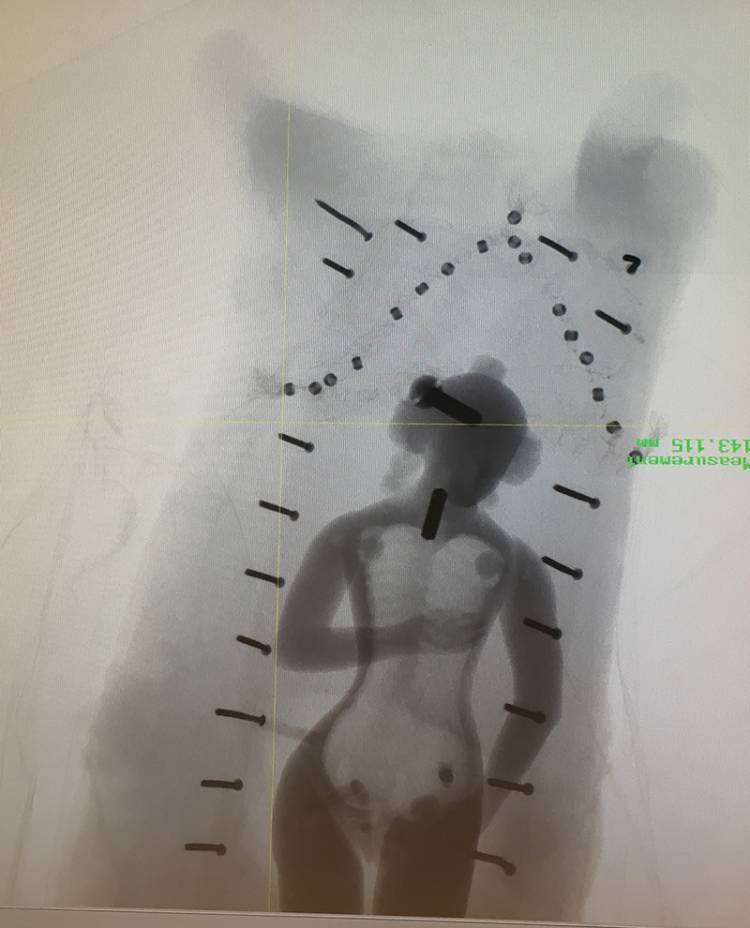 The X-ray images are then reconstructed into two-dimensional cross sections, or slices, of the manikin’s body. When the 2-D slices are stacked together on a computer, the end result is a detailed 3-D image of the manikin both inside and out.

Hammeke peered at one of the scans on a computer screen. Embedded within the carving, she could see signs of previous repairs and other hidden details they could have only discovered by taking the manikin apart.

“Some of them light up inside with pins and screws,” Hammeke said. “Or their limbs have been put back on with pieces of metal.”

Duke’s collection of tiny manikins is a quirky claim to fame.

Based on clues such as the dimpled knuckles and hairstyle on some of the manikins, scholars trace the first examples to Germany in the late 1600s or early 1700s, in the workshop of a man named Stephan Zick, who was also known for making ivory models of human ears and eyeballs.

Researchers are still trying to solve the mystery of their purpose, said art historian Cali Buckley. She tracked down ivory manikins in collections in the U.S., Canada and Europe as part of her doctoral dissertation for Pennsylvania State University.

“These ivory models were once thought to have been used as tools for doctors to explain childbirth to expectant mothers,” Buckley said. But “this scenario is unlikely,” she added.

The manikins were made at a time when male physicians were breaking into women’s medicine, a field long dominated by female midwives. Given that, Buckley thinks they were used by male doctors to demonstrate their knowledge and dexterity with the female body to their colleagues.

By the 18th century, Buckley said, the ivory manikins were largely relegated to objects of curiosity and luxury status symbols in private collections, having been replaced in the medical world by more realistic teaching tools such as wax models or cadavers.

Most of the manikins in the Duke collection were purchased in the 1930s and 1940s by Duke thoracic surgeon Josiah Trent and his wife Mary Duke Biddle Trent, the great-granddaughter of industrialist-philanthropist Washington Duke, for whom the university is named.

Today it is illegal to buy or sell elephant ivory across international boundaries, but prior to the 1989 ivory ban such trade would have been fair game.

The couple began collecting medical artifacts as newlyweds, thousands of which were donated to the university in 1956 after Trent’s death.

Since then, the manikins have spent most of their time in archival storage boxes or behind display glass, too fragile for regular handling. They are housed in a library vault kept at 65 degrees Fahrenheit with 45 percent humidity, rarely exposed to sunlight. 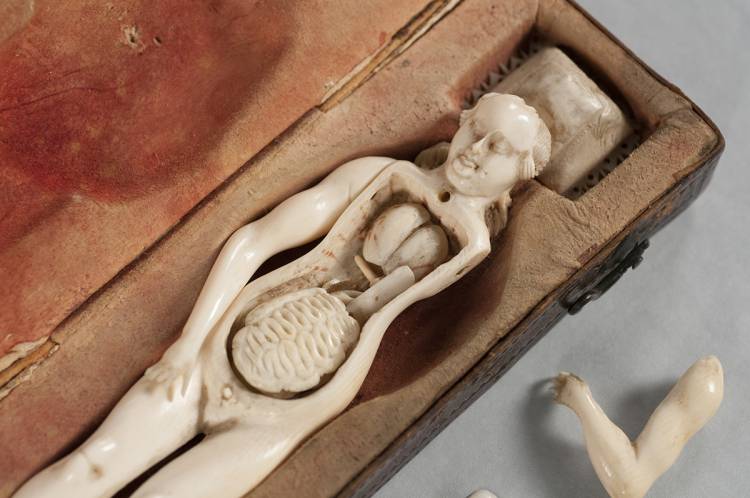 In the conservation lab in the basement of Perkins Library, senior conservation technician Rachel Penniman prepares the manikins for their next scan.

She uses a knife blade to cut tiny body outlines into layers of white foam padding, like outlines at a dollhouse crime scene, and stacks them to match the contours of the manikin’s surface.

Penniman has been building custom enclosures for each manikin to help transport the delicate artifacts to and from the X-ray scanner, and preserve them after they’ve been returned to the stacks.

The manikins fit snugly inside, protected by a rigid case. Conservators will then put them in a second watertight, airtight box to protect them from the elements before carrying them across campus to the microCT scanner.

They’ve scanned just over half of the collection so far.

The next step is to make the data freely available online. Eventually the plan is for researchers, students -- anyone -- to be able to virtually dissect them, download them in high-resolution, even make their own 3-D printed replicas to hold in their hands.

Ingold has one such replica in her office -- about half the size of the original -- 3-D printed in layers of grey plastic. She carried it in her pocket en route to a recent meeting. “My colleagues joked I was rubbing it for good luck,” she said.

How to Put Duke’s Values in Action