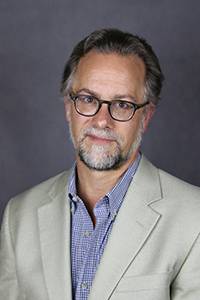 William Johnson has one of those very scholarly looking offices where important, weighty tomes make the bookshelf sag.

But Johnson, who studies the culture and history of ancient Greece and Rome, is examining a very basic question about many of those aged books: How did the authors get anyone to read them?

“We have all this stuff from antiquity,” he says. “How did it come to the public notice? How did people get published? What exactly does “publishing” mean in an ancient context?”

Johnson, the current chair of classical studies, spends his time these days trying to answer that important question, the answer to which may lie in identifying which people and institutions in ancient civilizations were – in today’s social media parlance – the key influencers from whom others took their social and intellectual cues.

Professor Johnson: How did you become interested in answering this particular question?

Back in graduate school many years ago, I developed an interest in ancient literacies. I wanted to think things through from the ancient point of view. That was the beginning of a whole series of books and articles. I discovered there had never been a full study of ancient books. Papyri. The ancient fragments of papyri that were the ancient book rolls. So I published a book on that, and that then led to a study of ancient readers in Rome, describing the ins and outs of how people went about reading – which was really different from how we go about reading now. I did a study about reading practices.

Your current work is about studying how people got others to read what they wrote. What were the obstacles an author faced?

The biggest obstacle an author faced was that there was no institutional support. No publishers. The biggest hurdle to authorship was being embedded in the right sort of reading community. If you’re not, you were very unlikely to have an audience for what you write. Because it’s all person to person.

The way things would circulate in antiquity – you wrote something and then shared it with friends and followers – your circle. Those people may like it and share it with someone in their circle who’s not in your circle. This is your current-day Twitter analogy. The people who say ‘hey, that’s great’, those are your influencers.

That’s why I say the biggest hurdle is finding the right reading community, which can then attach to other reading communities who might care enough to copy and distribute it. It’s not like there are copies at a bookstore. You have to go through that positive gesture of getting a copy, having it copied onto papyrus, and then passing it along.

This all sounds awfully complicated.

It’s social, right? And social things are complicated. But if you think about it now, like a modern technology, there are some interesting parallels. You’re trying to promote something and you need someone to invest in you in some way. If you’re in a polite group, everyone will say it’s great. But you need them to actually take the step of asking to make a few copies and give it to others.

Was the simple act of writing difficult back then?

For elites in this society, they’d normally have a slave who could write dictation. Papyrus was pretty common so it would be normal to have a scrap of papyrus. There’s plenty of evidence about the process where a person thinks a lot about how a paragraph should be, and then dictates to a slave who writes it down. Writing was fairly laborious. It involved a reed pen and you scratch out what you’re writing on papyrus. Or a wax tablet, where you would scratch it out with a stylus.

What made an author successful?

If it goes far enough that people with copies of your book aren’t your friends, or friends of your friends, you can claim some real degree of success.

Were religious figures the key influencers of that time?

In the time period I’ve been investigating, 1 BC – 2 AD, the answer is no. But that’s the dividing point. Once you get into the 3rd century you’re in the world where the Christian church is taking hold.

But in ancient times the church hierarchy didn’t exist.

It wasn’t there yet. So the influencers were the big men in society. They’re the top writers themselves and the big networks they associate with. One of the things really striking about Rome is that authors are almost always either politically, intellectually and socially powerful or attached to people who were. The only way authorship could be validated was to be in a network or community with figures of that sort of authority.