They are both known at Duke for empathetically lending an ear to their peers.

They push others to be the best, most successful versions of themselves.

And they are both humble about their hard work.

Byrd and Carter now share a fourth common bond – They are both recipients of this year’s Algernon Sydney Sullivan Award.

The annual award is presented to one graduating Duke senior and one member of the faculty, staff or graduate student body of Duke University or Duke University Health System. Award recipients must embody the qualities of Algernon Sydney Sullivan, a prominent lawyer, businessman and philanthropist from the South who lived in New York in the late nineteenth century. He exhibited qualities of selflessness, generosity of service, nobility of character, integrity, and depth of spirituality.

The Duke award recipients are chosen by two Duke selection committees who review the nominations and then pass along their recommendations to the Duke Office of the Provost. On April 20 in the Allen Building Board Room, Duke University Provost Sally Kornbluth presented the awards during a ceremony. The recipients received a framed certificate and an engraved medallion.

“This truly is a blessing,” Carter said during the ceremony. “I was not expecting this at all, so I am very much thankful for this award and for what it represents.”

“I’m fully convinced that there are many Duke faculty and staff who deserve this award as much as or more than I do, and I’m just grateful to those of you who felt fit to include me in the nominations this year,” Byrd said.

Learn more about the 2018 award recipients: 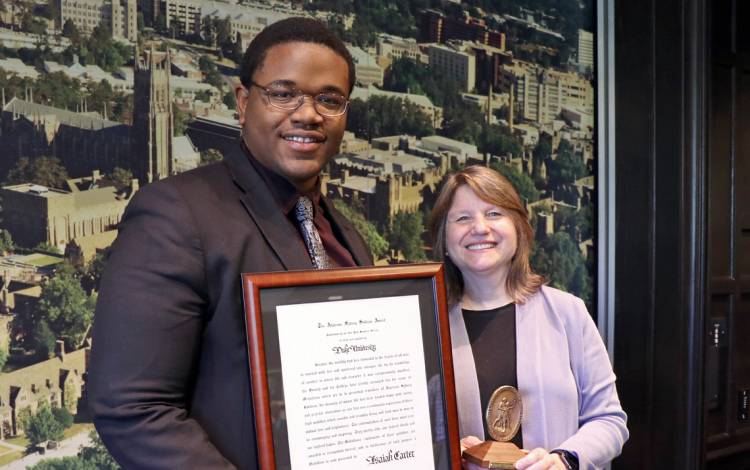 As an aspiring doctor, Duke graduating senior Isaiah Carter already has the skills needed for a career in health care.

Carter empathetically listens to others, then offers advice and affirmation. He looks out for colleagues or strangers who are struggling or do not have the same access to opportunities, and provides much-needed help.

Carter has connected with other Duke students, listening to their struggles and fueling their ambitions, during his four years of actively participating in campus activities such as tutoring students in chemistry and serving on the Duke President’s Council on Black Affairs. Another aspect of Carter’s passion for helping others is serving as a repeat community volunteer with the Durham Nursing & Rehabilitation Center.

Carter is also a member of Every Nation Campus, a Duke student group and campus ministry committed to serving the community.

“If you interact with Isaiah for a long enough time, you will feel strengthened, called to a higher level of personal character and integrity, inspired to pursue the dreams that you thought were too big for you (Isaiah is a dreamer), encouraged by Isaiah’s personal story and life, and willing to emulate his lifestyle,” wrote Reuben Moses, a Duke graduating senior and member of Every Nation Campus, in a nomination letter.

Carter, who has academically pursued medicine and research, has studied the neurological science, physiology and spiritual components of health. He has worked in a Duke lab that studies how paralyzed people are rehabilitated, and in his Duke community research class, Carter has developed a grant to help reduce childhood obesity in low-income populations.

“Isaiah’s interest in medicine and health disparities extends beyond the classroom and is integrated across various activities that he has been involved in during his time at Duke,” wrote Kathleen Sikkema, Duke’s Gosnell Family Professor of Global Health, in a nomination letter. “His lengthy list of community, volunteer and pre-medical program experiences provide further support to his character and commitment to health and medicine.”

Carter has also served as a role model within the Duke Cardea Fellows Program, a four-year learning community for Duke pre-health undergraduates.

“During exit interviews with all senior Cardea Fellows, many peers remarked on (Carter’s) optimism and influence to keep them going when they were feeling challenged or discouraged,” wrote Alyssa Perz, director of the Duke Cardea Fellows Program. “I have never had so many students single out one peer as an exceptional role model, guide and inspiration.” 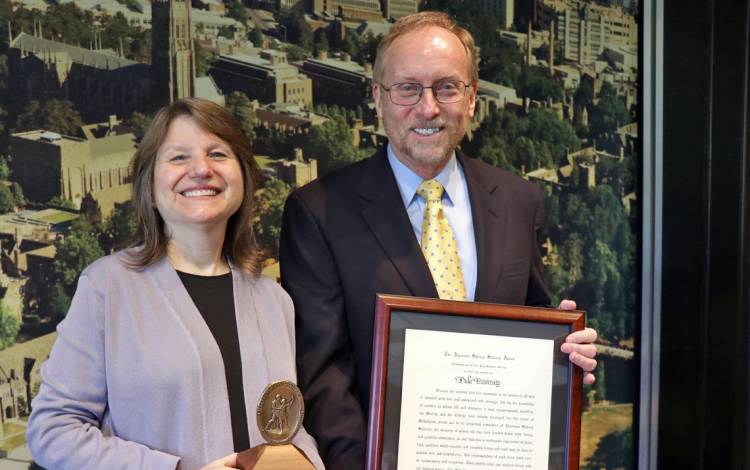 Byrd is set to retire in May after a 40-year career at Duke.

Understandably, his nominators mention that his contributions to Duke “would go on for pages.”

“Bob is the very personification of a servant-leader,” wrote Duke employees Deborah Jakubs, Peter Feaver, Leonard White and Steve Hinkle in a combined nomination letter. “He is a leader in that he makes things happen and gets other people to do things they wouldn’t necessarily do without his prodding. But he does it in a way that draws attention above all to the shared goal and practically not at all to himself.”

Byrd’s ideas led to the creation of the David M. Rubenstein Rare Book & Manuscript Library, which was formally dedicated in 2015. He has brought unique collections to Duke and fostered strong relationships with Duke faculty and staff. He has served on many university committees, on which he has examined everything from the reaccreditation process to the launch of Duke Kunshan University in China to the construction of Bostock Library and the Von der Heyden Pavilion.

“Bob’s professional accomplishments with University Libraries are very recognized and appreciated,” wrote Susan Berndt, a senior regional development director with Duke University Development, in a nomination letter. “Being kind and selfless while also gently driving forward important Library projects and programs have always been hallmarks of the way Bob engages and influences others to gain their partnership and accomplish goals.”

In addition to his work with Duke University Libraries and across campus, Byrd combines his personal faith with his love of learning and moving ideas forward. In 2012, he helped found the Center for Christianity and Scholarship, an independent educational nonprofit that explores the intersections of Christian thought with scholarly and academic life at universities; and in 1995 helped found the Trinity School of Durham and Chapel Hill, a K-12 independent school that educates students within the framework of Christian faith.

“Bob never calls attention to himself,” wrote Peter Denton, Head of School at Trinity. “...He does not come into a room and take over. He does not push himself forward. He listens, he takes measure of the situation, and then he gets down to work. And he gets a lot done, all on the quiet, without any care for whether he gets credit.”

How to Pick the Best Way to Communicate