In the contemporary political scene, there are few true bipartisans remaining. Two of them came to Duke April 4 to discuss the state of political compromise in a time of deep ideological divisions.

“What you will see today is a manifestation of true bipartisanship,” McCorkle said. “This is something you don’t see in American politics today.”

The tone of the discussion was set by acknowledging the 50-year anniversary of Dr. Martin Luther King Jr.’s assassination. The somber moment, McCorkle said, should be accompanied by reflecting upon the “ray of hope” of people with contrasting views working through their differences.

“I’ve always felt compelled to find areas of agreement,” Dreier said. “By the time I left Congress in 2013, I had more Democratic friends than Republican friends.”

The congressmen agreed that finding common ground is easier if there is a shared belief in the nation’s foundational institutions. While times seem tough for working across the aisle, the congressmen said, there is hope for democracy yet.

“The hope that I have right now, as someone who finds it very easy to be a harsh critic of Donald Trump, is that we’re going to survive because of our institutions,”Drier said. “As horrible as Trump is, he will make the United States stronger.”

Price added that it is important to support institutions because “that’s the only way democracy works.” 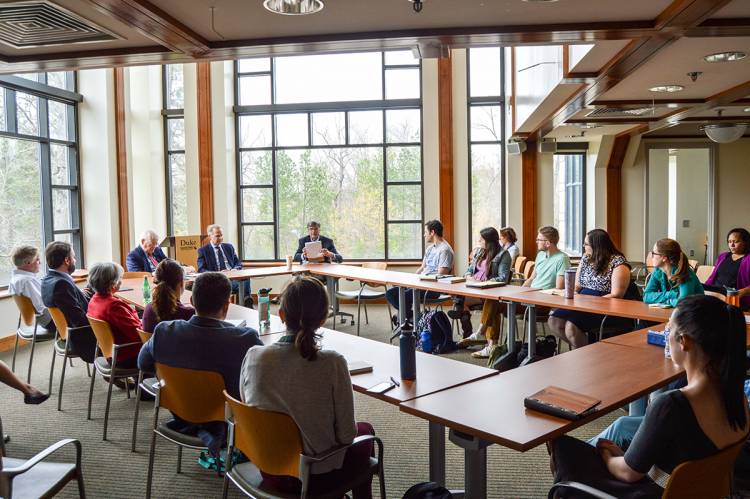 Price and Drier have a history of supporting these words with action. In 2005, they co-founded the House Democracy Partnership (HDP), of which Price is still the ranking member. HDP is a collaborative body which focuses on strengthening democratic institutions abroad. Price so strongly believes in the role of Congress in foreign policy that he co-authored an op-edin December with former Secretary of State Madeleine Albright.

Questions from the audience included MPP/MBA student Brad Harris, who wondered whether moderates were disappearing from American politics for good.

Dreier acknowledged the trend of the disappearing political center, adding jocularly, “I’ve never liked the term moderate­. If you’re in the middle of the road, you’re going to get run over.”

He also noted the growing resistance of elected officials to admitting mistakes. “I loved getting up and admitting that I was wrong,” Dreier said.

At the end of the session, Price wondered, “What would be the key to unlock the dysfunction [in Congress]? This is something we all need to think about. I’m not convinced that it’s socializing or debating an argument on the floor. These are fairly superficial indicators of a larger reality.”

There is no easy answer for institutional reform because of the times we live in, Price said. “I think the polarization of the institution reflects the country, not the other way around,” Price said. “Leadership matters.”