When Ernesto Ortiz began studying the environmental impacts of a proposed highway project in Peru, he did not imagine that the work would lead him to study mercury contamination in a nearby river and become part of a national public health declaration of emergency.

Several years ago, Ortiz and colleague William Pan began studying the environmental impacts of a proposed highway project running from the Pacific Ocean in Peru through Brazil to the Atlantic. However, they noticed that field workers tasked with gathering highway information in local communities were leaving to work for higher pay in artisanal gold mining (ASGM) along the Madre de Dios river. ASGM employs an illegal and dangerous technique of mixing mercury in the river’s sediment where it combines with gold and leaves behind an environmental health hazard. 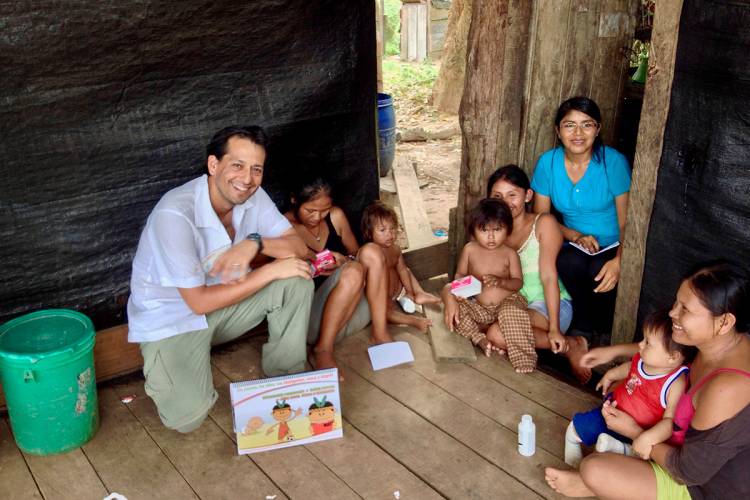 Thus sprouted a new research project: In 2012, Ortiz, the Duke Global Health Institute (DGHI) research project manager, and Pan, a DGHI professor, embarked on a large-scale survey of communities along the river, collaborating with the Ministry of Health to collect information and biological samples upstream and downstream from the mining areas.

Ortiz said partnering with the government opened doors for them. “We work closely with them at the national level but also at the regional level…. The health authorities are very well respected in these communities.”

Ortiz remembered that “my first trip there was just me and a nurse in a boat.” He expanded his network in Peru and built trust in the communities by meeting with numerous local leaders, doctors, nurses or technicians.

Building trust was not easy, but Ortiz described how “being a Peruvian, being a doctor, and working with the health authorities” helped him connect with the local community. He also promised that he would return with the results of any surveys.

While corruption and political vagaries combined to stifle policy action around the issue, the state of emergency did help finance a public-private partnership with the Ministry of Environment to establish fish farms in native communities.

Ortiz considers the project a success thanks to its expeditious dissemination. “What’s the goal of public health research? To impact policy, and have that policy impact the health of people,” Ortiz said. “But usually to see that takes forever: you get your money, write your protocol, go to the field, get data, analyze the data, publish it in a journal, and then that publication goes to a policymaker…it takes years and sometimes you never see it.

This story is part of a Duke Policy Bridge series highlighting the policy engagement work led by faculty and researchers across campus. To learn more about this project and others going on in the Peruvian Amazon, check out this video highlighting a Bass Connections team of students involved in field work, this video providing a more in-depth explanation of the project or listen to this NPR story about Ortiz’s work.

To inquire about our engagement story series, email patience.wall@duke.edu